The 2020 FIA Karting European Championship – OK/Junior is ready to start on the Circuito Internacional de Zuera, in Spain, from July 30th to August 2nd. The entry list, made of 183 names, testifies to the motivation of the drivers and teams to get back on track in the long-awaited competition promoted for the third year running by the RGMMC Group. 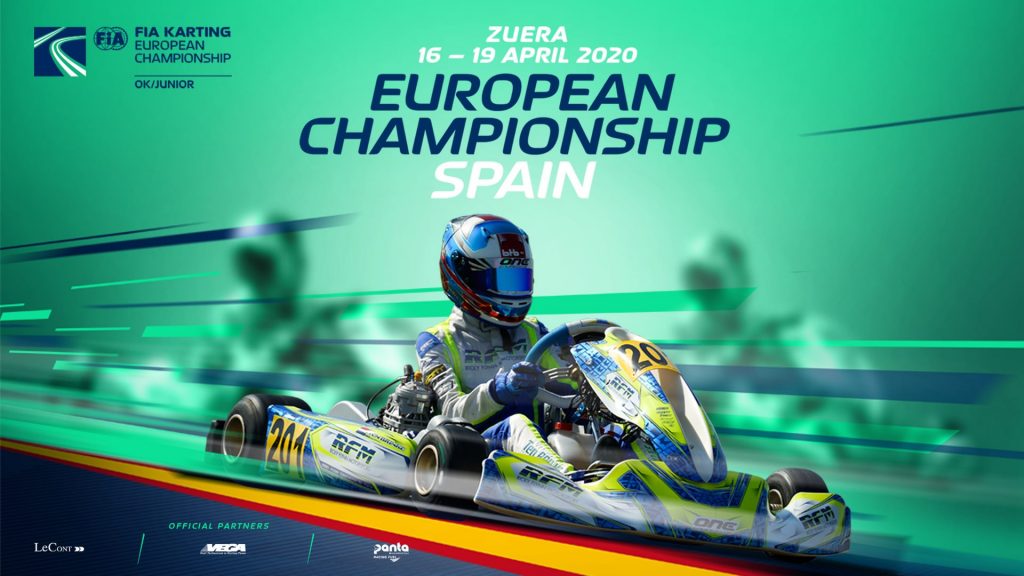 The FIA has set the general framework for the resumption of racing in this post-lockdown period. Sanitary safety is the keyword, with the result that the simple rules must be strictly adhered to. As with all FIA Karting Competitions this year, wearing a protective mask and respecting physical distance will be the basis of the new protocols to be adopted during the race weekends.

Only the individual awareness of everyone will lead to the collective effectiveness of these measures, with the short term future of Karting Competitions being at stake (find more about the sanitary guidelines at Zuera below the article).

Since the last CIK-FIA competition for direct-drive classes was organized at Zuera in 2016, the circuit will represent a relatively new experience for the current drivers. The majority of entrants still had the opportunity to get used to the tricks of the Spanish layout at the opening round of Champions of the Future.

Located in the north of Spain, between Bilbao and Barcelona, the International Karting Circuit of Zuera offers a unique challenge due to its fast and open layout, the longest on the season, made of 15 turns. The high speeds and flowing corners make maintaining speed crucial and smooth driving is required to extract the best lap times around the circuit.

Sunny weather, high temperatures and low humidity should be expected for the duration of the event, which will provide drivers with ideal track conditions while putting their physical resistance to the test!

183 Drivers, 88 in OK and 95 in Junior, have registered for the first round of the FIA Karting European Championship at Zuera, representing 43 nations.

In OK, favorites will be aplenty, starting with the reigning double World and European champion Lorenzo Travisanutto, eager to keep his crown in 2020 against strong opposition, including his own Tony Kart teammates, the 2016 World Champion Pedro Hiltbrand and the Brit Joe Turney. Promoted from Junior, Andrea Kimi Antonelli (Kart Republic/AKM) and Nikita Bedrin (Ward Racing) will be amongst those to watch, along with the 2019 Junior World champion Thomas Ten Brinke (Ricky Flynn Motorsport).

Amongst usual contenders can also be pointed out Taylor Barnard (Kart Republic/Rosberg Racing Academy), Dilano Van’t Hoff (Forza Racing) and Harry Thompson (Sauber Karting Team). Watch out also for Jamie Day and the Charles Leclerc by Lennox Racing squad, who rose to the top at Champions of the Future, and Juho Valtanen, one of the fastest on the Zuera circuit on that weekend!

The Junior class offers a wide range of fast drivers willing to grab their piece of the cake at Zuera. The Italians Alfio Spina and Brando Badoer (both at Kart Republic) have shown improving pace turned into noticeable results from the start of the season. Their teammates Ugo Ugochukwu and Arvid Lindblad, winner of the opening round of Champions of the Future, could also be amongst potential threats, as well as Tuukka Taponen (Tony Kart), Tymoteusz Kucharczyk (Birel ART), Igor Cepil (Kart Republic) and Martinius Stenshorne (Kart Republic / Rosberg Racing academy).

A live page will be at your disposal from Friday to Sunday, including live timing, by Apex Timing, and live streaming, by RGMMC (available on Saturday and Sunday).

Reports and results will be published on this website on a daily base.