Callum Bradshaw delivered an impressive performance for the start of the 2020 IAME Euro Series, this weekend at Essay, highlighted by a dominant victory in Sunday’s Senior Final ahead of the Frenchman Enzo Lévêque and the Brit Guy Cunnington, on the podium for his maiden appearance in the competition promoted by RGMMC. 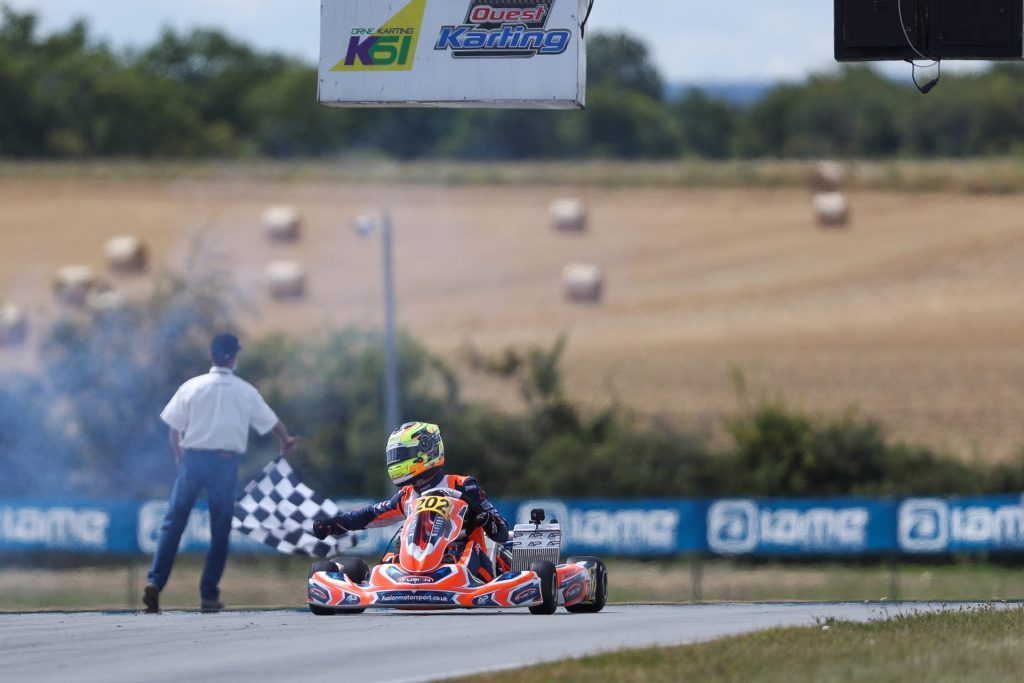 Callum Bradshaw (Fusion Motorsport) concluded on a victorious note what has been a very strong weekend on the International Circuit of Aunay-Les-Bois. Pole sitter on Friday, the British driver won his four heats on Saturday to lead the provisional classification ahead of the decisive races of the Senior class.

Winner of the Prefinal on Sunday morning, Bradshaw kept his advantage at lights out in the afternoon and quickly pulled away. While the Fusion Motorsport driver held on firmly to the lead, the podium battle raged between Enzo Lévêque (Team KLN) and Guy Cunnington (Strawberry Racing), followed by Dylan Léger (Kart Management) and Harry Platten (BMR) while other contenders like Ayrton Fontecha (CRG) and Thomas Fleming (BMR) climbed from further back in the order to spice up the debates.

As the 22 lap-race went on, gaps started stretching but Lévêque still kept himself within close range from Bradshaw. Yet, the Brit would not let himself be disturbed and concluded his dominant weekend on another clean sweep, ahead of Lévêque and Cunnington who was able to keep a charging Fontecha behind him.

Platten rounded up the Top-Five, followed by Maximus Mayer (Fusion Motorsport) and Sacha Maguet (T.A Engineering / MGT). Both produced strong recoveries of respectively ten and 19 positions, which gave the “Driver of the Day” award to the Frenchman. Fleming was classified in eighth place, ahead of Caden McQueen (Croc Promotion) and Ruben Moya (MDC Racing).

Check out the complete results of the Senior Final.

Bradshaw logically leads the provisional ranking after Essay with 89 points, five more than Lévêque, followed by Cunnington at 83. The 2020 IAME X30 Euro Series will be back on track on August 27-30 for its Second Round taking place on the Kartodromo Internacional Lucas Guerrero of Valencia, in Spain.