The fourth event of the FIA Karting European Championship – OK & Junior started in the centre of Spain at the Circuito Internacional de Zuera in very hot weather. On Friday 23th July, 139 participants took part in the qualifying practice for the latest European competition, 56 in OK and 83 in OK-Junior, in temperatures ranging from 35 to 39°. 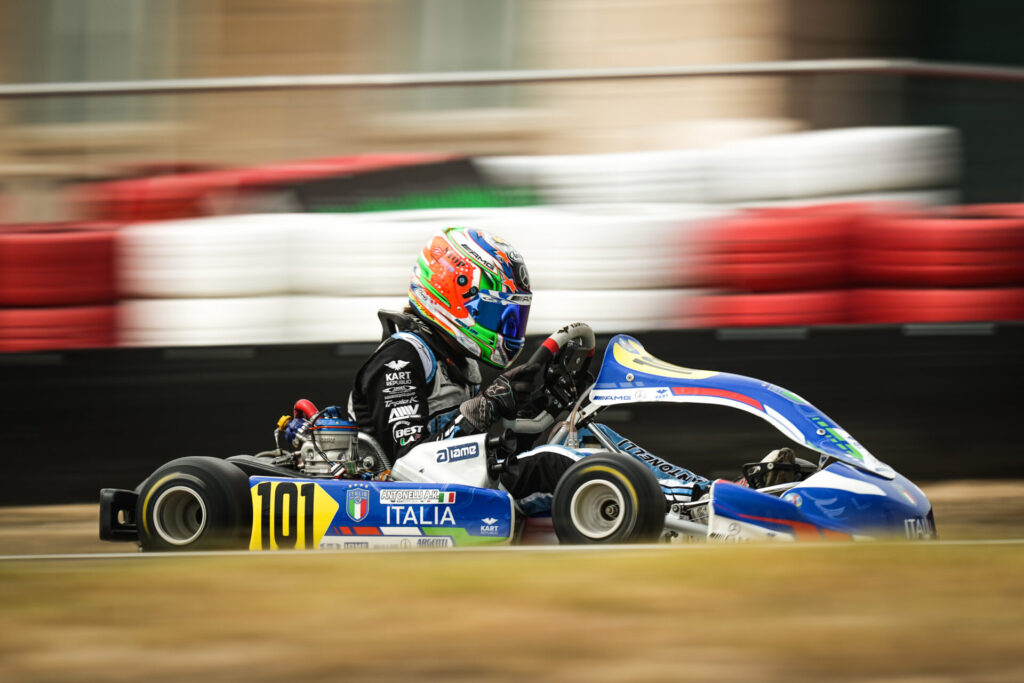 With 1699m of overheated asphalt in the middle of the desert, a light wind, a few gusts possible, the scene for the qualifying sessions was set. More than ever, the choice of the best moment to enter the track was crucial in order to be able to take maximum advantage of the MG tyres and a favourable track position for slipstreaming without being held up. These are not always easy ingredients with which to find the right balance.

American driver Kai Sorensen, who races under an Italian licence, his adopted country for the purposes of the competition, achieved a good result by setting the fastest time in qualifying for the FIA Karting European Championship – Junior in Zuera with the Forza Racing team. The gaps in the class remained tight, but Sorensen still managed to beat one of the title contenders, the Brazilian Matheus Ferreira, leader of Session 1, by three hundredths in the third session. The fastest in Session 4, Poland’s Jan Przyrowski, followed in third place by four hundredths, while another Pole, Gustaw Wisniewski, was the fastest in Session 2 and took fourth place by a tenth.

Visibly moved by his performance, Kai Sorensen said: “I am delighted to have achieved my first pole position at this level. Experience counts and effort pays off in the end. I like the Zuera track and I hope that I can keep up the pace in the qualifying heats. I am not in the title race, but I would like to finish the European season with a good result.“

Italy’s Andrea Kimi Antonelli once again put in an outstanding performance with the KR Motorsport team during qualifying for the FIA Karting European Championship OK in Zuera. While the fastest drivers in each session finished within seven hundredths of a second of each other, Antonelli relegated them by two tenths of a second.

Unusually, the gaps in each group increased rapidly and sometimes the third driver was more than five tenths behind the first, which confirmed the difficulty of this exercise. The contenders for the title did well overall, as the Bulgarian Nikola Tsolov finished second, ahead of the Brazilian Rafael Camara, while the Briton Arvid Linblad finished fifth. Only the Russian Artem Severiukhin was left behind in 24th place.

“I am of course delighted to have achieved pole position, it is a very good way to start the race after which the title will be awarded. However, there is still a long way to go and the conditions will be different tomorrow with much cooler weather. We’ll see.”

The Zuera event can be followed on the official FIA Karting Championship app for mobile devices and on the website www.fiakarting.com.