This year’s great start to the Champions of the Future series continued in Spain, with two enormous fields in the two categories battling it on in the heat of Zuera, seeing many leaders, with some surprises adding to the established names! 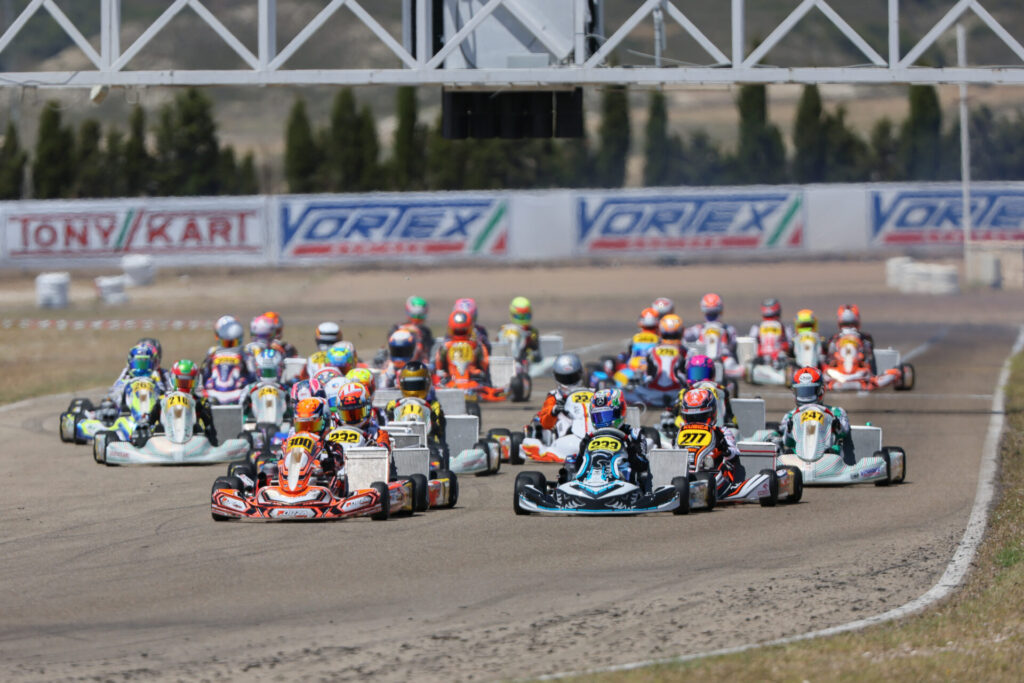 Another fantastic event took place in the Circuito Internacional de Zuera, in Spain, under clear blue skies and temperatures reaching 37° C, with the two OK categories reaching record numbers of attendance. With several names topping the timesheets and leading the classification standings over the weekend, it was Kirill Kutskov who took the final win in OK-Junior and Andrea Kimi Antonelli in OK.

The 84-driver field of OK Juniors, split into 3 groups, was the first to hit the track for qualifying. While all eyes were on the last race’s stars like Slater, Keeble and Powell, it was three different names that topped the timesheets. Dmitry Matveev (Koski Motorsport) took the overall pole, ahead of Maksimilian Popov (Ward Racing) and David Walther (Koski Motorsport).

The same top-3 of Walther, Matveev and Popov continued their leading trend in the qualifying heats, while Harley Keeble (Tony Kart Racing), Kirill Kutskov (KR Motorsport), Keanu Al Azhari (Tony Kart Racing) and Freddie Slater (Ricky Flynn Motorsport) also started to make their appearances at the front. It was finally Walther who got the pole position for the prefinal, ahead of Ean Eyckmans (Kosmic Racing Department) and James Egozi (Tony Kart Racing), with the latter two, despite not taking any wins in the heats, being rewarded for their consistency.

Once again, Sunday turned things upside down, with Kutskov coming up 10 positions to win the prefinal ahead of Eyckmans and Maksimilian Orlov (Parolin Motorsport). In the action-packed Final, Kutskov got the lead and separated himself from the rest of the field, winning 2 seconds clear from the rest, while Egozi claimed second and Orlov third.

The OK category qualifying was much more in line with the expectations, where Andrea Kimi Antonelli (KR Motorsport) took the overall pole position ahead of Arvid Lindblad (KR Motorsport) and Joseph Turney (Tony Kart Racing). The three continued their dominance in the qualifying heats, with all heat wins being distributed solely between them. Unsurprisingly, Antonelli topped the classification, getting pole for Sunday, Turney second and Lindblad third.

The prefinal saw a similarly strong pace from Antonelli and Lindblad. However, they only finished second and third after that a late charge from Nicolo Cuman (Forza Motorsport) saw him claim a surprise pole position for the final. Tymoteusz Kucharczyk (BirelArt Racing) was the big surprise of the session, making up no less than 28 positions to come back to fourth.

Lindblad quickly jumped ahead of Cuman in the final while Antonelli lost some ground. The latter however was fast to catch up, and by the 6th lap, he took back the lead. From that moment on, he was untouchable, opening up a 3.5-second lead. Lindblad finished second and Cuman third.

The series standings are now starting to take shape, with Kutskov taking the lead from Slater and Popov in Junior. Rashid Al Dhaheri (Parolin Motorsport), William Macintyre (BirelArt Racing) and Alex Powell (KR Motorsport) are just behind, a breath away.

The Champions of the Future series follows a long tradition of RGMMC productions who have invested in top-level media coverage with live streaming through the weekend, daily interviews and highlights.

All races, as well as interviews and highlights, were made available on the RGMMC Productions Youtube channel. More information and complete results can always be found on the Champions of the Future Series official website www.championskarting.com, the RGMMC Group website www.rgmmc.com, and the Champions of the Future Facebook and Instagram pages with the handle @championskarting.