On a circuit like Zuera that does not forgive the slightest mistake, the twenty qualifying heats of the last round of the FIA Karting European Championship – OK & Junior held on Saturday 24th July made a severe selection among the contenders for victory. The two favourites Freddie Slater in Junior and Andrea Kimi Antonelli in OK nevertheless managed to maintain faultless progress to take the lead in their respective categories. 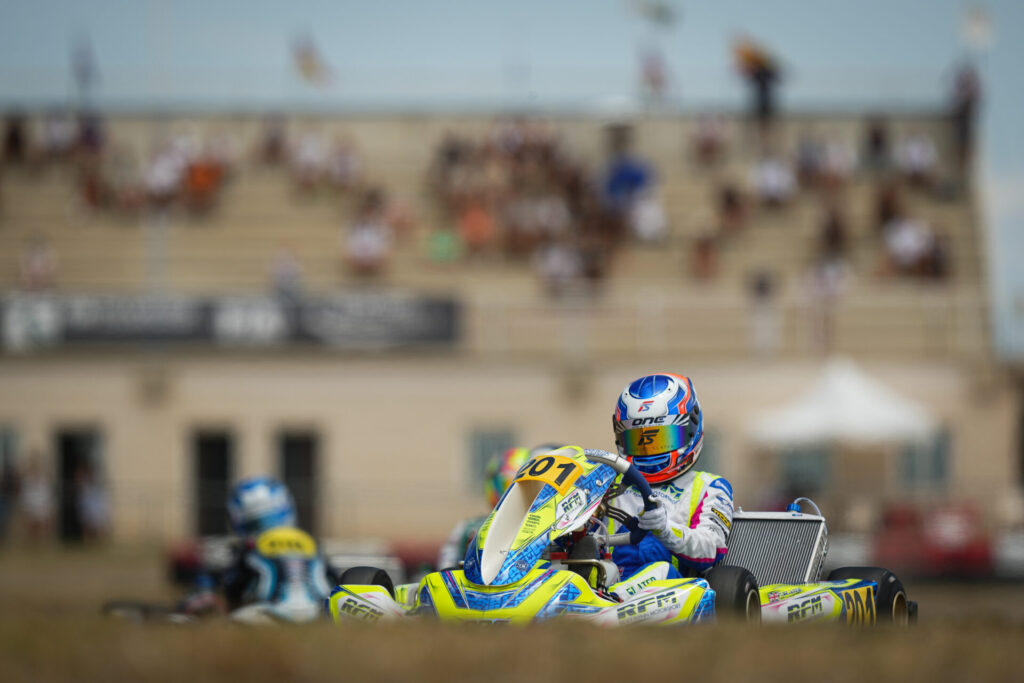 As expected, the heat was less oppressive than the day before with a slightly cloudy sky. A significant number of contacts and run-offs punctuated the competition, while there was frequent overtaking in all races. The configuration of the Spanish circuit combined with the stakes of the last round of the Championship, in which some had nothing left to lose, provided the ingredients for an explosive cocktail. Five heats, one for each driver, remain to be contested on Sunday morning before the decisive Finals.

Junior: Slater back in the lead

With all the determination of a leader, Freddie Slater gave himself every chance by winning his four heats, which allowed him to come back from 13th to 1st position after epic battles in which he had no opportunity to make mistakes. His closest rival for the title, Matheus Ferreira (BRA) was also in great shape with three wins and a second place, while the third potential champion, Alex Powell (JAM) also kept his chances alive by climbing from 18th position to the leading group. Ean Eyckmans (BEL) managed to make up some of his deficit by moving up to the top 10 and Harley Keeble (GBR) did a great job in each heat to move up about 50 places to the top 20.

Tomass Stolcermanis (LVA) made his mark with a very incisive race despite losing a victory due to a badly positioned front fairing. He joined drivers like Jan Przyrowski (POL), Douwe Dedecker (BEL) or James Egozi (ITA). Poleman Kai Sorensen (ITA) had difficulties in maintaining his position during the heats, while Gustaw Wisniewski (POL) sank to the bottom of the ranking by not controlling his impetuosity enough.

After taking pole position in qualifying, Andrea Kimi Antonelli (ITA) fulfilled his mission by winning each of his three races of the day. Fast and determined, he led each time from start to finish. This gave him a psychological advantage over his closest rivals for the title.

Arvid Lindblad (GBR), the closest driver to Antonelli in the rankings, approached this phase with a certain caution from 5th position, but had to face several intrepid opponents who did not have the same pressure on their shoulders. Rafael Camara (BRA), third in the provisional rankings, had started the event very well with third position in the qualifying practice and then a string of successes to get back into the fight for the title. Unfortunately, he couldn’t avoid a collision on the first lap of his last heat and lost a lot of places by retiring.

Nikola Tsolov (BGR) performed strongly with two victories and a second place to move in to the direct wake of the leader to play his card in the result of the Championship. Tuuka Taponen (FIN) was one of the best drivers of the day along with Rintaro Sato (JPN) and Olin Galli (BRA).

Live-streaming, live-timing and results of the Zuera event can be followed on the official FIA Karting Championship app for mobile devices and on the website www.fiakarting.com.