In the morning the temperature was already over 30°C on the Wackersdorf track, and the 18 qualifying heats on the program for Saturday 19th June proved to be highly spectacular. Frenchman Emilien Denner consolidated his domination of the FIA Karting European Championship – KZ by winning twice. The FIA Karting European Championship – KZ2 was led at this stage by Dutchman Senna Van Walstijn, while Sri Lankan Yevan David took the lead in the FIA Karting Academy Trophy. 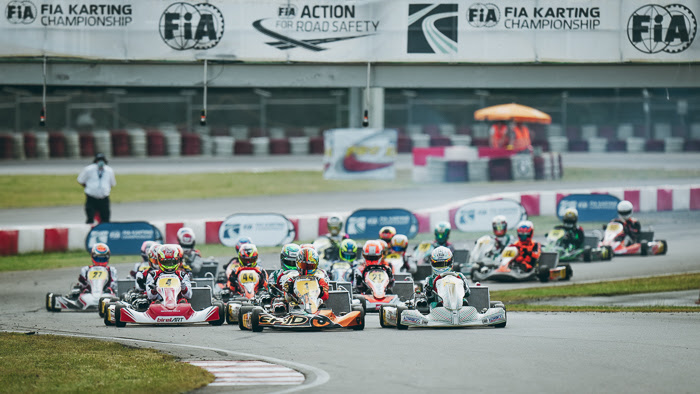 Saturday was therefore an intense day with 18 starts. The 1190m long Bavarian track allowed for numerous overtaking manoeuvres at all levels, but it also tested the fitness of the drivers and the reliability of the engines in the summer weather. Several minor incidents, caused by the enthusiasm of the starts as well as by the increasing intensity of the confrontations, influenced the hierarchy in the three categories and more than one participant left some of his ambitions and his pride on the side of the track. On the other hand, the three leaders of the day all achieved clear rounds and took the maximum number of victories possible. In KZ and KZ2, these were the drivers who had achieved pole position in qualifying, while the leader of the Academy Trophy progressed from 4th place.

Six heats will be run on Sunday morning, one for each driver, before the starting grids for the three afternoon Finals are decided. A lot can still happen in this later qualifying phase.

The poleman Émilien Denner (FRA) confirmed his talent by obtaining two beautiful consecutive victories. He took a comfortable lead over Noah Milell (SWE) at the end of the first heat, but Riccardo Longhi (ITA) put up a good fight in the second, even taking the lead for four laps. But Denner found the resources to take the initiative again and to increase the gap at the finish line. Longhi was still well placed in the provisional ranking against Milell. A little further back, Jérémy Iglesias (FRA) progressed ahead of his team-mate Alessandro Irlando (ITA). Simo Puhakka (FIN) remained in the leading group, followed by Francesco Celenta (ITA) and Douglas Lundberg (SWE). Stan Pex (NLD) was making good progress into the top 10 since his 21st in Qualifying. On the other hand, the situation was less positive for Marijn Kremers (NLD) who lost several places after a contact with Viktor Gustafsson (SWE) in the second heat.

Yevan David takes over in the Academy

The first four qualifying heats of the FIA Karting Academy Trophy were in no way monotonous. The young talents from all over the world fought without mercy, sometimes reserving some surprises for the chequered flag. The Sri Lankan representative was the most successful, as his two victories propelled him to the top of the provisional standings on Saturday evening. Dutch driver Reno Francot kept himself in a very good position with a win and a second place. Luca Neuenschwander (BRA) climbed back into the top five ahead of Maximilian Schleimer (DEU), who finished second in qualifying, and Oscar Wurz (MCO), who came back from 10th position. Poleman Bart Harrison (GBR) lost ground due to a less successful second heat, Maciej Gladysz (POL) was under investigation and Dion Gowda (SGP) lost the benefit of his victory in the first heat due to an incident on the last lap of the second, when he was aiming for third place.

After four clear victories, the young Dutchman Senna van Walstijn consolidated his position at the front of the KZ2 qualifying heats on Saturday evening. The rest of the competition will validate or not his invincibility on the Wackersdorf circuit, but so far he has made his mark. Behind him, four rivals are lying in wait with almost equal scores in the top five. They are his compatriot Laurens van Hoepen, the Finn Paavo Tonteri and the Italians Giacomo Pollini and Giuseppe Palomba. All of these drivers took at least one victory each. Danilo Albanese (ITA) was brilliantly back in the top 10, while several other talented participants had problems. A collision at the start of the B-C heat saw Alexander Schmitz (DEU) demoted, while Jorge Pescador (ESP) dropped down the rankings following a retirement. Daniel Vasile (ROU) did not finish two of his heats and sank to the bottom of the ranking.

Provisional programme for the Wackersdorf event