The Qualifying Heats of the opening round of the 2020 IAME Euro Series drew a halfway hierarchy in all three classes, this Saturday, July 25th, at the International Circuit of Aunay-Les-Bois, in France. Callum Bradshaw held on to his lead in Senior, joined on top of the standings by Ruben Volt (Junior) and Leo Robinson (Mini). The hardest part is yet to come for the leaders against a fierce opposition eager to fight back in Sunday’s Prefinals and Finals! 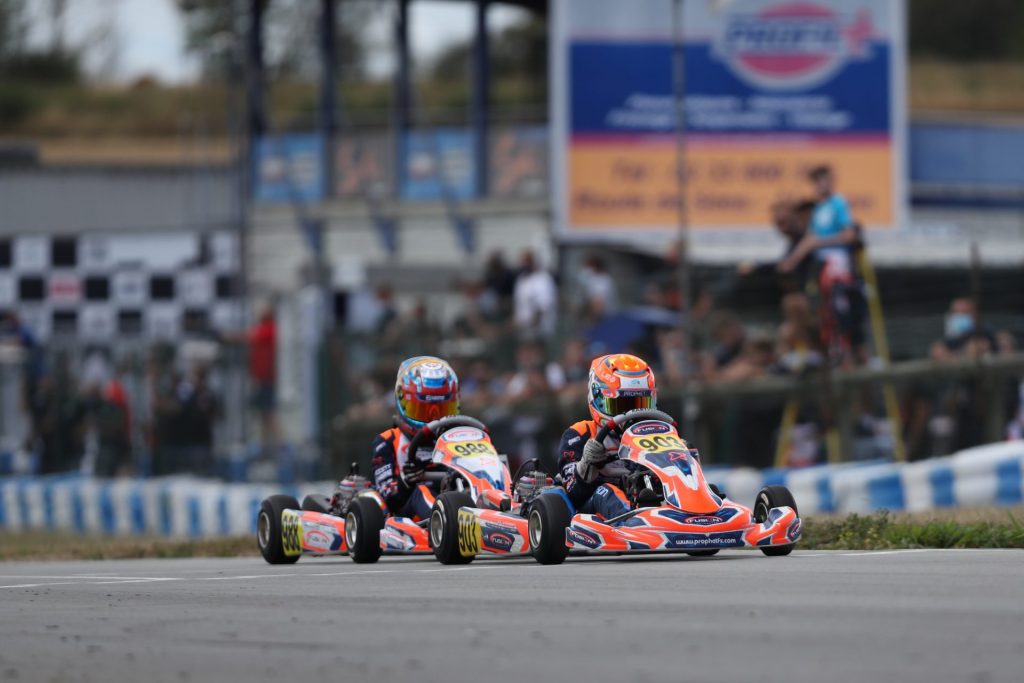 Despite 70% chances of heavy rain on the local forecast and a grey-clouded sky, temperatures in Essay stayed mildly warm on Saturday for the qualifying races of the international meeting organized by RGMMC. Light rain still fell on several occasions in the afternoon, yet not enough for drivers to switch from slick to wet tyres, despite a sometimes more slippery racing line putting their skills to the test and spicing up debates on track!

Callum Bradshaw (Fusion Motorsport) maintained himself in the lead of the Senior class by converting his pole position into four consecutive victories in the heats. The British driver will start tomorrow’s Prefinal from the front row with his countryman Harry Platten by his side. The BMR driver never finished outside of the Top-Three, including two wins. Guy Cunnington (Strawberry Racing) completed a full British leading trio thanks to a win and a pair of second places.

Ruben Volt (Dan Holland Racing) will line up on pole position for Sunday’s Prefinal in the Junior class, having secured the lead of the provisional classification on Saturday. The Estonian managed to win all three of his heats on a tight edge over his rivals after climbing from the grid’s second row. The Brit Bart Harrison (Mick Barrett Racing), second overall, showed consistency on track by finishing runner-up in all of his races.

His countryman Oliver Greenall (Fusion Motorsport) was classified in third position with three victories on track but a penalty meant that he lost the third one, ahead of the Spaniard Santiago Vallve (Kart Republic Spain), third on three occasions. The Japanese driver Kanato Le (Fusion Motorsport) ended up in fifth position with a second and third place as best finishes. Freddie Spindlow (KR-Sport) took a win and classified seventh overall, three ranks in front of the class’s pole sitter Herolind Nuredini (Evolution) who finished twice in the Top-Three but lost a win due to a penalty in his last heat.

Leo Robinson (Fusion Motorsport) showed pace and determination in the Mini class this Saturday, achieving three wins out of three attempts to secure the Prefinal’s pole position. The young Brit led two of his countrymen and team mates in Cathal Clark and Friday’s fastest man Fionn McLaughlin. Both secured one victory and preceded the Spaniard Alex Martinez (Praga Espana Motorsport), twice in the top-Three, and the Frenchman Clément Outran (Privateer), who won the opening race and also took a third place along the way.

Check out the complete provisional order for Senior, Junior and Mini.

Drivers will be back on track from 09:00 am on Sunday for their warm-up sessions, followed by Second Chance Heats, the Prefinals and Finals.