The Champions of the Future series successfully got off the ground last weekend with more than 170 drivers, representing 20 countries, competing on the Circuito Internacional de Zuera, in Spain! The new karting competition created and hosted by RGMMC confirmed the high interest amongst international teams and drivers willing to train in the best conditions for the opening race of the FIA Karting European Championship – OK/Junior, scheduled on the same circuit at the end of July. The final victories went to Jamie Day (OK), Arvid Lindblad (Junior), Dmitry Matveev (Mini) and Paolo Ippolito (KZ2). 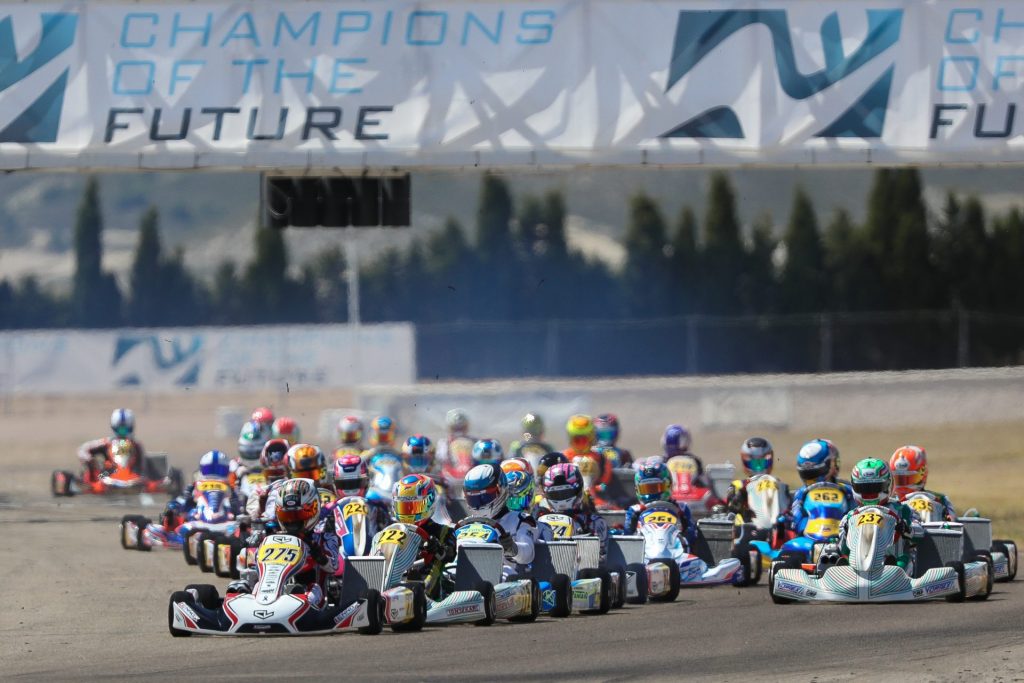 Competitors enjoyed a top-quality event at Zuera, with high-standard races on the same circuit and in similar conditions as the upcoming First Round of the FIA Karting European Championship for OK and Junior classes, scheduled at the end of July. The two classes were the most-represented on track with 68 and 71 drivers happy to benefit from a golden opportunity not only to race in a competitive environment but also to prepare for the FIA Karting event also organized by RGMMC in two weeks.

The local weather was hot and dry during the entire weekend, which represented a challenge for drivers and machines, whether in OK and Junior but also in Mini and KZ2, included for the first time this season in an international series. From Friday to Sunday, the meeting benefited from world-class streaming and commentary services with Jake Sanson taking the mic already on Friday for the “Qualifying Show”, a new broadcasting concept giving viewers an early taste of track action. All the Qualifying Heats on Saturday, as well as the Second Chance Heats, Prefinals and Finals on Sunday were streamed on the series’s official website and social media pages for maximum visibility to all the competitors and partners.

The health of all the drivers and people involved in the making of the event was also at the center of the promoter’s considerations. Sanitary measures such as obligatory mask-wearing, social distancing and avoidance of physical contacts were applied at all times and everywhere on the circuit, including in the parc fermé, pre-grid and on the starting grid of each race.

In a class filled with 68 entries, Juho Valtanen (KR/IAME) secured the overall pole position in Qualifying ahead of Nikita Bedrin (Tony Kart/Vortex), Noah Degnbol (Tony Kart/Vortex), Norton Andreasson (Tony Kart/Vortex) and Oliver Gray (Birel ART/TM). The heats smiled again upon Valtanen with two victories, enough to take pole position for the Prefinal. Jamie Day (Birel ART/TM), second overall, concluded his run of heats with a pair of wins and a third place as best results, preceding Andrea Kimi Antonelli (KR/IAME) who finished all of his races in the Top Three. Andreasson, who had won Friday’s opening heat, was classified in fourth position ahead of Bedrin. The Russian recovered well from a difficult first race by taking two wins and a second place.

On Sunday morning, Day secured the Prefinal victory in front of Joe Turney (Tony Kart/Vortex) and Bedrin. The Emirati led once again the field at the Final’s start before Bedrin, Valtanen and Turney. The 18-lap race quickly took the shape of a three-driver tussle as Day managed to pull away from the field, taking with him both Bedrin and Barnard, who had made his way from seventh on the grid. While Dilano Van’t Hoff (Exprit/TM) went past Turney for fourth, the leading trio increased its gap while keeping each other tight.

Four laps from the flag, Barnard made a decisive move for second on Bedrin and tried to catch Day who firmly held his position until the finish line. Barnard had to make do with second place ahead of Bedrin, followed by Turney and Valtanen, promoted to fifth after Antonelli was handed a post-race penalty. Van’t Hoff, Andreasson, Robert De Haan (Energy/TM), Matheus Morgatto (Parolin/TM) and Lorenzo Travisanutto (Tony Kart/Vortex) completed the Top-Ten. With 89 points, Day tops the class standings after Round 1, followed by Bedrin and Turney with 82.

Martinius Stenshorne (KR/IAME) came to the fore as first leader of the OK-Junior class, filled with 71 drivers. The Norwegian set the fastest lap in Qualifying, followed by Freddie Slater (Kosmic/Vortex), Coskun Irfan (Kosmic/Vortex), Brando Badoer (KR/IAME) and Ugo Ugochukwu (KR/IAME), before winning the opening heat on the same day. At the end of the qualifying races, Igor Cepil (KR/IAME) took the lead of the standings thanks to three wins. Irfan classified in second place with two victories, ahead of Arvid Lindblad (KR/IAME), Timoteusz Kucharczyk (RK/TM) and Stenshorne whose tally of three wins could have been four without a penalty.

Cepil kept the upper hand in the Prefinal against Lindblad and Stenshorne. The final race of the weekend led to a thrilling battle for victory. Cepil led the field from pole but could not prevent Stenshorne’s passing move on Lap 1. The early part of the 15 lap-race saw a group of drivers isolate themselves upfront with Stenshorne being chased by Lindblad, Cepil and Douwe Dedecker (KR/IAME). As the race went on, Slater and Ugochukwu progressively caught the leaders while Lindblad moved to first place and pulled away.

The Final’s closing stages gained in intensity when Stenshorne, fighting to keep his second place, briefly went off track and fell down to sixth. Both Slater and Cepil went past him and completed the podium behind Lindblad, winner by a two second-margin. Ugochukwu crossed the finish line in fourth position, followed by Nikola Tsolov (KR/IAME), Stenshorne and Dedecker. The final Top-Ten was completed by Alexander Gubenko (Kosmic/Vortex), Irfan and Karol Pasiewicz (Tony Kart/Vortex), the author of a 16 place-recovery. Lindblad, with 88 points collected at Zuera, leads the class ranking ahead of Cepil, 84, and Slater, 79.

Dmitry Matveev (Energy/TM) was the man of the weekend in the Mini category, taking pole position and winning all the races from Friday to Sunday! The Russian secured the leading spot in a tight Qualifying session ahead of Kean Nakamura Berta (KR/IAME) and Adam Hideg (KR/IAME). The Japanese asserted himself as Matveev’s closest rival by finishing the three qualifying races in second place, while Mark Kastelic (KR/TM) took the provisional third place with Hideg in fourth. Matveev confirmed his ambitions by winning Sunday’s Prefinal in front of Nakamura Berta and Christian Costoya (CRG/TM).

From pole, Matveev took the best start in the Final and built a gap big enough not to be caught again. The 10-lap race delivered a thrilling battle for the last two podium places between Nakamura Berta, Costoya and Hideg, soon joined by a charging Kastelic. The tussle came to a conclusion on the penultimate lap when Nakamura Berta went dived around the inside of Kastelic and secured second place in front of his team-mate. Hideg crossed the finish line in fourth, followed by Maciej Gladysz (Parolin/TM), Denis Curavale (KR/IAME) and Luna Fluxa (KR/IAME). Costoya lost some ground halfway through the race and finished in eighth position while Lenn Nijs (KR/TM) and Louis Leveau (Parolin/TM) completed the Top-Ten. Matveev currently tops the provisional standings with 89 points, four more than Nakamura Berta and eight over Kastelic and Hideg.

Paolo Ippolito (CRG/TM), driving for the CRG Factory, set the fastest lap in the KZ2 Qualifying in front of Brad Benavides (Sodikart/TM) and Daniel Vasile (DR/Modena). Ippolito made good use of his starting position in the Qualifying Heats, taking three consecutive wins and the provisional lead on Saturday. Benavides was classified second overall, ahead of Vasile who managed to qualify on the second row of the Prefinal’s grid despite losing two third places due to penalties. Brandon Nilsson (CRG/TM) ended up in fourth position, followed by Antonio Garay (Sodikart/TM).

Winner of Sunday’s Prefinal ahead of Benavides and Ippolito, Nilsson kept the lead at the beginning of the 18 lap-Final, followed by Garay who took a lighting start from fourth, while Benavides fell down to fifth. The race soon turned into a double battle, one for the lead between Nilsson and Ippolito, and the other involving Garay and Benavides for third. While the latter made his pass on Lap 5, Ippolito moved up to first place two rounds later and pulled away from Nilsson. The Italian tried to keep up with his CRG team-mate while resisting the pressure from a recovering Benavides.

The Spaniard reduced the gap on Lap 15 and attacked Nilsson who faced some trouble and had to retire. Upfront, Paolo Ippolito secured the win ahead of Benavides who was later excluded from the race for his involvement in Nilsson’s retirement, as decided by the stewards of the meeting. Garay was promoted to second place in front of Vasile, Brice De Gaye (Alpha/TM) and Rodrigo Almeida (DR/Modena). In the general standings after Round 1, Ippolito leads with 87 points, followed by Garay, 83, and De Gaye, 79.

The Second Round of Champions of the Future by RGMMC will take place at the Kartódromo Internacional do Algarve of Portimao, in Portugal, from October 22nd to 25th, 2020.