The Parolin Racing Kart team has again recorded very good performances at Lonato during the second round of the WSK Super Master Series, especially in the Mini category. The competition proved to be more difficult in OK and OK-Junior. 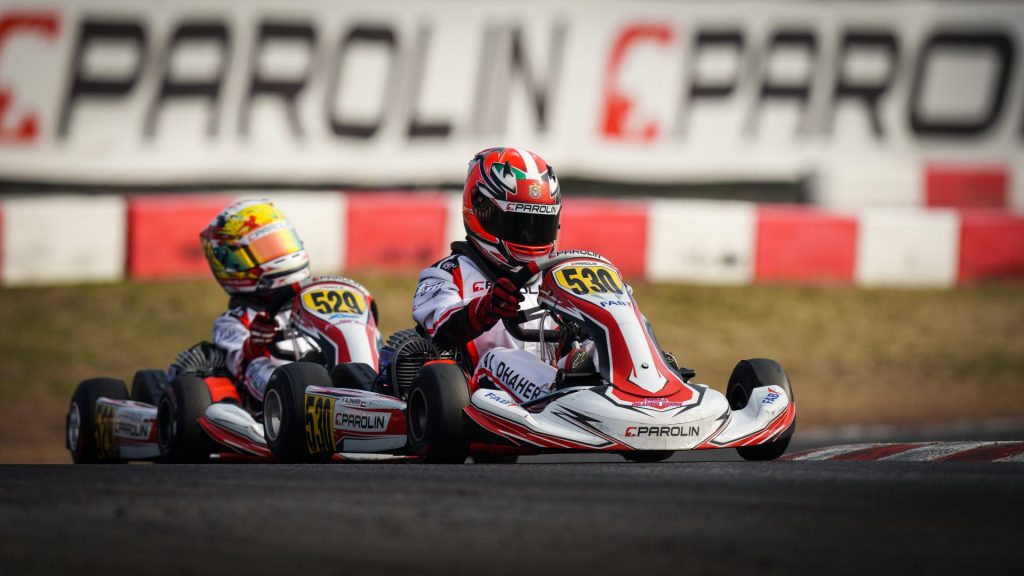 “We have a few reasons to be happy about this weekend of racing in Lonato”, explained Marco Parolin. “Rashid Al Dhaheri’s presence in the leading group fighting for victory and his 2nd place confirm our competitiveness, while Guillaume Bouzar’s top 10 is good news. I have to admit, however, that we did not have the same success with all our drivers. The ups and downs of the competition didn’t always allow us to achieve the expected results this time. More than ever, we are continuing to develop our equipment while at the same time training the youngest drivers.”

Maciej Gladysz set the team’s fastest time in seventh position out of the 108 Minis at Lonato, but a problem in the first heat overshadowed his score despite very convincing results afterward. Rashid Al Dhaheri regained a lot of ground in the heats and finished third in his Prefinal before fighting for the Final victory. To finish second in such a hard-fought race is a very rewarding result. Anatoly Khavalkin was once again very competitive. 10th after the heats, he took second place in his Prefinal, but his climb was stopped by a mid-race collision when he was fifth.

Guillaume Bouzar had a very solid run in the heats before reaching ninth position in his Prefinal and climbing another eight places in the Final to finish ninth, 30 places up from Qualifying. Gladysz concluded the meeting with a superb Final which enabled him to regain 17 positions. Japan’s Shimo Zhang put in an exceptional performance in sixth place in the Timed Qualifying session and in the heats. Fast and consistent, he finished in the top four each time but was deprived of second place in his second heat by a jump-start penalty. 17th at the end of the heats, he was fighting in the top 10 of the Prefinal when an incident sent him back to the bottom of the standings and deprived him of access to the Final.

Sasse saves his honor in OK

Thanks to a good Prefinal during which he progressed seven places, Hugo Sasse was able to reach the Final and maintain his place at the finish. His team-mates were not so lucky. Matheus Morgatto started well and paid dearly for his retirement after a collision in his last heat when he came back up to eight place. He didn’t have time to prove his talent in the Prefinal as another contact forced him to retire on the second lap. James Wharton did not progress as expected in the heats, but he seemed to be able to qualify in his Prefinal without a penalty for a detached spoiler.

No respite in OK-Junior

Fate was also unfavorable to the Parolin drivers in OK-Junior. Not at their best during Timed Practice, they were victims of retirement in the tough battle of the heats. Only Giovanni Trentin seemed to be in a position to qualify in the Prefinal, but difficult opening laps and a spoiler penalty thwarted his plans.

Philip Victorsson had managed to come back to 16th position in his Prefinal with a gain of 11 places, but a detached spoiler destroyed his efforts. Arnur Shabdar’s score was down by two successive retirements in the heats despite good progression in the Prefinal. Rajala Veeti regained places in each heat, but that was not enough to open the door to the Prefinals.

Parolin Racing Kart will return to the WSK Super Master Series in two weeks’ time in the south of Italy on the circuit of La Conca with reinforced motivation.