The Birel ART Racing team confirmed its incredible level of performance in the WSK Super Master Series with a victory and a podium in KZ2 at Lonato, a week after their double victory in the Winter Cup. Giuseppe Palomba triumphed over his rivals and adverse circumstances at the end of a memorable Final that also saw Alessandro Irlando climb on the third step of the podium. The Junior drivers also put in some great performances. 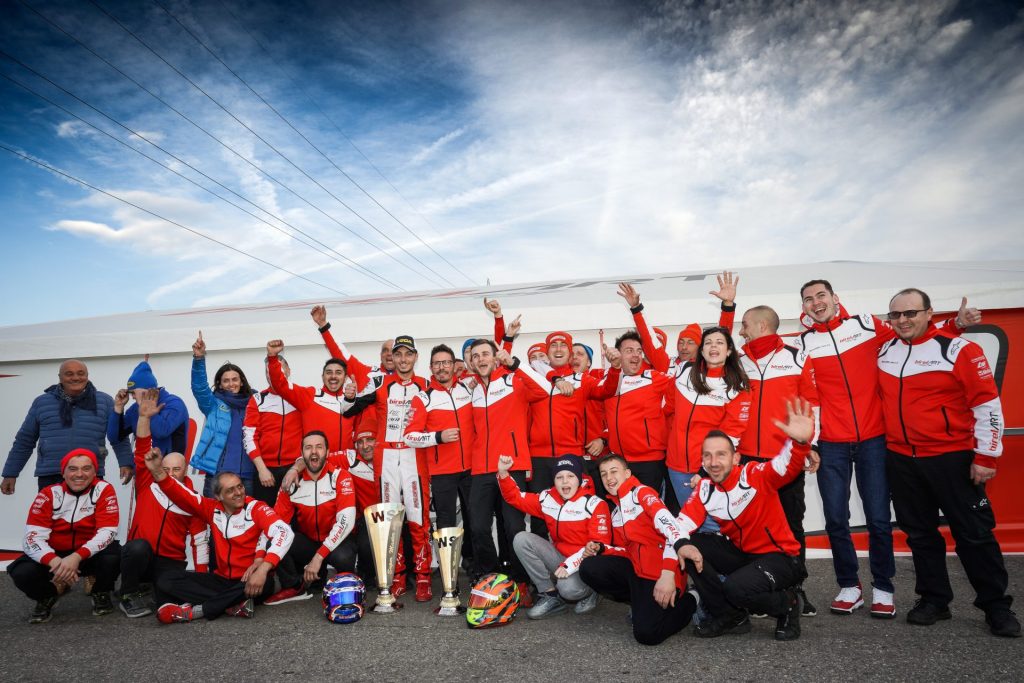 “It was a great weekend of very intense racing,” confided Ronni Sala, President of Birel ART. “The entry for this second WSK Super Master event was record-breaking, making the competition all the more difficult. We can be very satisfied with our competitiveness in KZ2. Not only did we win with Palomba, but all our drivers were able to finish in the top 14 and our brand was undoubtedly the best represented at the top of the table. The performances by Kucharczyk in fourth and Bertuca in eighth in OK-Junior were also remarkable.”

Always on top in KZ2

The Birel ART Racing Team has been accumulating performances throughout the competition. Alessandro Irlando and Riccardo Longhi set the two fastest times in Qualifying. Four heat wins and three fastest laps in the race later, Irlando and Giuseppe Palomba won the two Prefinals, with another fastest lap for Irlando who remained the record holder until the end of the race. Palomba raised the team’s tension when an incident occurred on the first lap of the Final. Stopped with a red flag, the race was back on for Palomba, who took the lead again and won by more than a second ahead of his rivals. Irlando gave his all to mount the third step of the podium.

Longhi had started the meeting very well, but a multi-kart crash on accidental water tracks in the last heat and a race incident in Prefinal A ruined his efforts. Riccardo ended his run with a great demonstration: 16 places gained in eight laps to finish eigtht on the line. Matthew Payne showed great fighting spirit with a fifth-fastest lap in Qualifying. After his momentum was balked during the heats, the New Zealander managed a great Final with a 16-place climb to 13th place. In a similar vein, Leonardo Marseglia was more imposing in the Final stages with a 14th position after a very convincing climb of 18 places.

Palomba and Irlando are in the top two places in the WSK Super Master Series ranking, which will finish in Sarno in a month’s time.

Performances to be confirmed in OK

In OK, Nikolas Pirrtilahti had some good heats and came back to fifth position in Prefinal A. He was running seventh in the Final, but unfortunately, he couldn’t finish the race because of contact. Clayton Ravenscroft was unable to defend his chances due to rib pain and even had to retire in the Prefinal, while Kobe Pauwels missed out on qualification for the Final because of a spoiler penalty. Matteo Massetani had started too far back in Timed Qualifying to be among the 34 finalists.

The Juniors have the wind in their sails

Tymoteusz Kucharczyk confirmed his fighting spirit in the top group of the 94 OK-Juniors. Regularly in the top three of the heats, he finished second in the Prefinal and fought in the top four during the entire Final, which allowed him to take fifth place in the provisional WSK Super Master ranking. Cristian Bertuca was able to show off after his tenth in Qualifying and made significant progress of 13 positions to eighth in the Final while Nikolay Violentii continued his international training. Emanuele Olivieri, the only driver entered in 60 Mini, was not far off the Final stages.