Joseph Turney claimed his maiden win in the 2020 WSK Super Master Series, last weekend at South Garda Karting. Pedro Hiltbrand, winner of the opening round at Adria, completed the 1-2 for the Tony Kart Racing Team, leader of the general standings after two meetings. 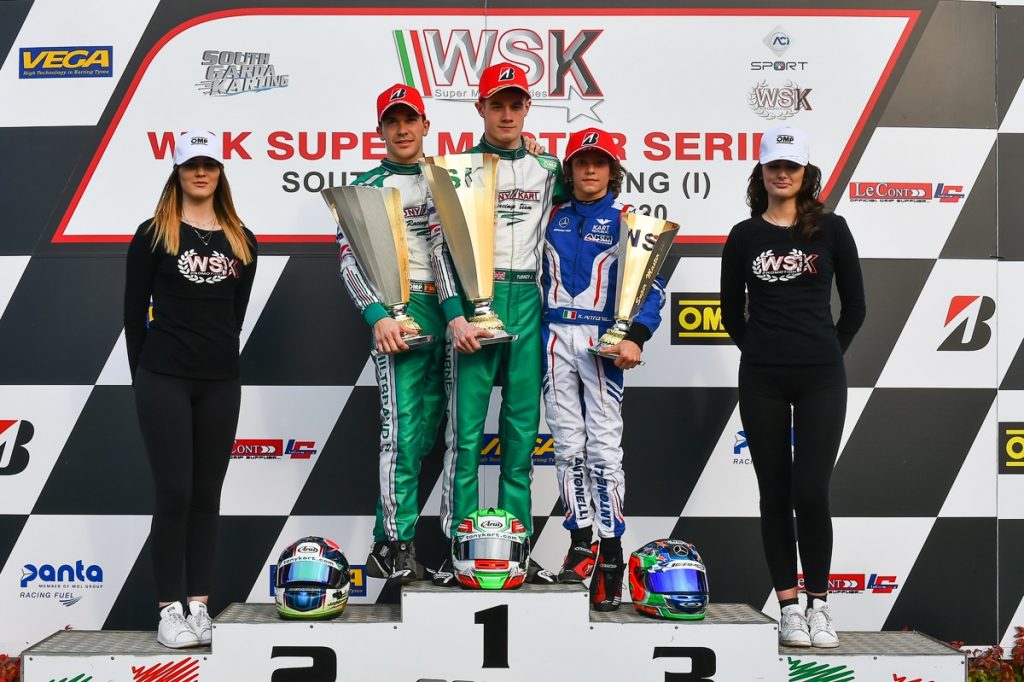 The Tony Kart Racing Team conquered its third seasonal victory at the South Garda Karting of Lonato where, at the end of the OK final of the Second Round of the WSK Super Master Series, Joseph Turney and Pedro Hiltbrand claimed the first two steps of the podium. Turney, fifth on the grid, managed to take the lead on Lap 6 of the Final with Hiltbrand keeping his pace during the whole race. Thanks to this result, the two drivers are now first and second in the general classification.

Tony Kart Factory drivers proved to be able to remain in leading positions since the early stages of the weekend, with Turney and Hiltbrand conquering a victory each in the heats. Lorenzo Travisanutto, on the other hand, was involved in a brawl in Prefinal but made an excellent recovery in the decisive race up to eighth, before he received a penalty. Diego Contecha suffered a similar faith despite an excellent Prefinal where he overtook six rivals.

In OK-Junior, Karol Pasiewicz, once again, put himself in the fight for top positions and ended fifth, very close to the victor. For Karol, the weekend finished with a victory and two best laps in the heats. Harley Keeble also came very close to the Top Ten with an excellent race, while the weekend ended with retirement for Maxim Rehm after obtaining four positions in Top Ten during the Heats. Bruno Del Pino scored good results with a fourth and a fifth place by recovering 11 positions in his heats but was forced to retire in Prefinal. Aiden Neate, instead, was not able to start in Prefinal, after gaining three positions within the Top Ten in the previous heats.

In KZ2, Simo Puhakka did not have the outcome he would have expected to his weekend. In Final, where he scored the best lap as he did in the heats, the Finn could not fight for a result in line with his potential after his starting position had been compromised by an incident in his last heat on Saturday where some wet tarmac sent him off-track. On Friday and Saturday, Alessio Piccini conquered good positions in the Top Ten while Paul Evrard made his way to the decisive race by recovering five positions in Prefinal.

In Mini 60, Jules Caranta recovered 11 ranks in the Final where Andres Cardenas emerged as the most efficient of all the team’s drivers. Very good race but bad luck for Jimmy Helias whose weekend ended on a frustrating note when a late contact forced him to give up a potential top-five finish. His overall performance level was still very positive with two second places in the heats. Same outcome for James Egozi, the highest-classified of all the team’s drivers with a sixth position at the end of the heats but involved in the same incident, a few meters from the finish line.

The Tony Kart Racing Team is now getting prepared for the Third Round of the WSK Super Master Series taking place at the La Conca International Circuit from March 6th to 8th for the OK, OK-Junior and Mini 60 categories.