Often amongst the contenders but not always rewarded, Marijn Kremers finally claimed the title his talent and determination deserved by winning the FIA Karting World Championship – KZ. A victory that the Dutchman had expected for a while. 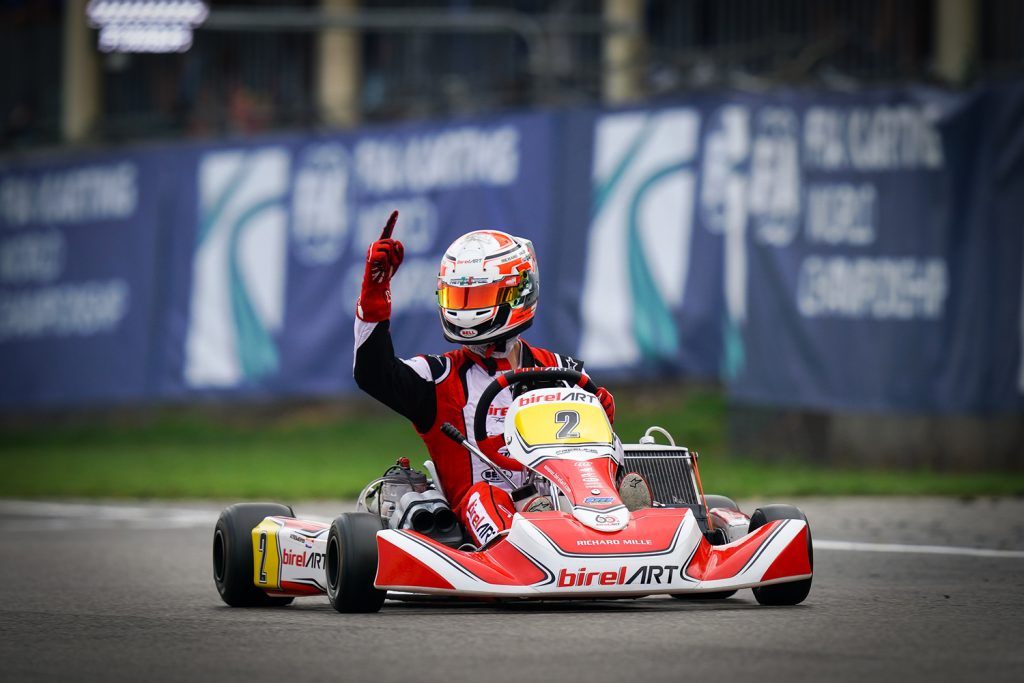 « Finally »: in just one word, Marijn Kremers pretty much summarised all the emotions running through his brain and body after crossing the chequered flag of the KZ Final at the recent FIA Karting World Championship of Lonato.

On the South Garda circuit that he knows too well, the Dutchman gave it all during 25 laps of a thriller race that felt like an eternity against some of the best karting drivers in the world. But, in the end, there would be only one winner and Kremers could lay his hands on that coveted trophy with a huge sense of relief. “Of all the titles, that’s the one you want to win,” he says. “In the past, I’ve been close in other races but not quite able to finish the job, also sometimes because of bad luck. But, finally, everything felt in the right place.”

“Looking back, it was certainly the race with the most pressure on my shoulders because we all knew how fast our package was in this race. I tried to go into the weekend without any pressure, mainly because I remembered what happened last year…“

In 2018, Kremers came short of claiming the world title when a strong weekend in Belgium had put him at the forefront of the Final’s grid. But, against all odds, the Dutchman didn’t go beyond the opening lap when a missed start made him lose ground before a hit with Tony Kart’s Simo Puhakka put an early end to his ambitions. “Back then, I just put too much pressure on myself on Sunday afternoon. Starting from the front row, everyone kept telling me that it was going to be my time. Many friends and family were there too because the track is so close to our home. I remember getting to the front line, seeing the lights go out and thinking ‘I’m not ready’. Then, I had a bad jump and we all know what happened.”

A frustrating experience he wasn’t willing to repeat entering the event at Lonato. “I just tried to go into this weekend not feeling any pressure, not looking at it as a world championship but rather thinking it is a race that doesn’t mean anything but is part of normal competition. And it worked. I stayed relaxed and calm. Even before the Final, I didn’t feel too much pressure and got off to a good start.”

His race started by a thrilling wheel-to-wheel battle against Sodikart’s Adrian Renaudin followed behind by the likes of Bas Lammers, Tony Kart ‘Top Guns’ Matteo Vigano and Marco Ardigo but also his teammate from Birel ART, Riccardo Longhi, who competed in his first World Championship within the KZ field. With the Italian driver fighting at the front for most of the weekend, it was no time for being silly. “Riccardo and I know each other very well and we’ve been racing together in WSK, with KZ and KZ2 combined, and in the European Championship. So, we knew we were not going to do anything crazy like taking each other out or anything like that. It was more relaxed because if you have someone else from a different team, you don’t know how they’re gonna react to you being first.”

With not only Kremers and Longhi but also the former KZ2 International Super Cup winner Alessandro Irlando, the Birel ART Racing Team could count on a solid trio who managed to help one another getting through the weekend. “In the first heat, we ended first, second [Irlando, ed.] and fourth [Longhi, ed.], so we had a talk with Ronnie [Sala, Birel ART Team owner, ed.] and Luca [Filini, Birel ART Team manager, ed.] and we all thought ‘ok, we’re gonna take it easy’ like if one of us goes ahead at the start, we’re not gonna race like a bunch of idiots and give the others a chance to get closer. So, Riccardo helped me in some heats, not overtaking me too early in the race and staying behind for a lot longer than maybe he would have had. That helped me get a heat win and then I gave it back on Sunday morning when I let him pass to make sure he would start the Final from the second row. That’s what teammate are for, right?”

Teamwork that eventually paid off with Kremers claiming the title, backed up by Longhi who crossed the line in third place before being promoted to the second step of the podium after Adrien Renaudin’s penalty. A post-race decision that eventually offered the 1-2 to Birel ART as a pretty decent gift for the Italian factory’s 60th birthday, only darkened by the first lap retirement of Irlando due to a mechanical failure.

For Kremers, clinching the World KZ title tasted like a little revenge, not only for last season’s disappointment in Belgium but also for a European Championship that didn’t live up to his expectations. “In Wackersdorf, for the opening round, I made a mistake twice in the heats and it cost us a good starting position for the Final where we managed to finish eight. But because the European season is so short, with only two races, you find yourself quickly on the back foot. Then, going to Sarno, we were already very fast in the first days but later got caught up. I put myself under too much pressure to perform well in Qualifying and I made a mistake, drove off the track and had to start the heats from the back. In this case, it was very difficult in this strong field of KZ drivers. I finally came back from P17 to fifth with a little bit of luck regarding how crazy this final race went. We had very good speed but I just didn’t complete it myself.”

With little time to celebrate his victory as he went straight back to work on Monday after the race, then flew home to enjoy a well-deserved rest with his family, the new Karting World Champion switched his mind and focus on his next challenge: the Feed Racing detection program in France. But this will be for another article…