Robert Kubica is widely passionate about Karting. In a recent joint Instagram live with Pirelli F1 boss and long-time friend Mario Isola, the 35-year-old Pole, who remains the first foreigner to win the Italian karting championship, recalls his years in the sport as the best of his career driving-wise. 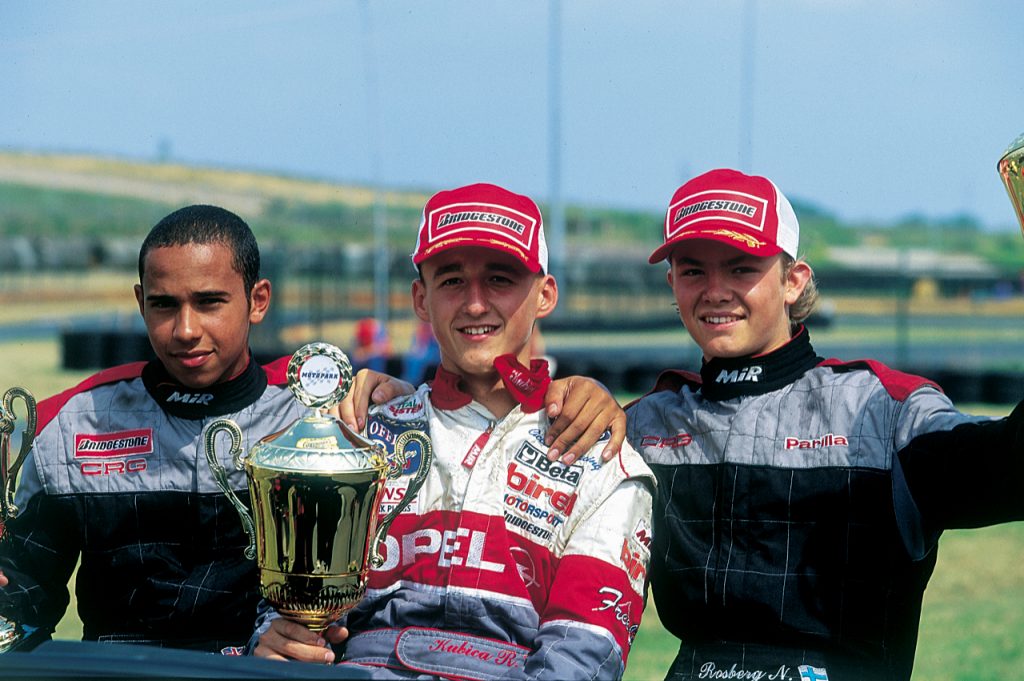 He may have competed in many categories and won races at the wheel of various machinery, even F1, still, Robert Kubica remains strongly passionate about the motorsport discipline where it all began for him: Karting.

“I started in Poland in 1995,” recalls the Alfa Romeo test driver. “I did three years there from 10 to 12 years old, then when I turned 13, I started racing in Italy in the so-called Junior category at the time. The reason for Italy is because all the main races where there, and still are, as well as the most important chassis and engine manufacturers. Italy is a kind of center for the world of karting. At that time, it was the strongest championship in Europe, even in the world.”

And, for a young and yet unknown guy coming from Poland, quite a big challenge to take up, especially with a limited budget and no factory backing. “In Poland, F1 was not on TV, rallies were much more popular and only a few drivers before me tried their hand at karting in the international arena.”

“I remember my first race away from Poland, we arrived there by van with one mechanic. At the first free practice, I saw those good looking official drivers from big teams, all those nice karts, and helmets. I had a regular white helmet, a suit and a kart without any branding.”

“My father told me to follow a Czech driver, Erik Janis, who was really good. So, I started going out behind him and after three or five laps, I started going faster than him! Then, I told my dad but he said that he was not pushing, just running the engine. But I did the pole position!”

“For a long time, I did not really know if I was good because my father always kept me at a very low profile. So, this time, I realized that maybe I was better than what I was always told. I finished second of the race and was kind of shocked!”

“Then, I became the first driver from outside of Italy to win the championship there and did it twice in a row, in 1998 and 1999. I remember those days as really incredible for me because I really enjoyed them. I was really driving, enjoying myself and my passion, not thinking about Formula 1.”

Kubica even goes further by making a rather surprising statement about his years in the sport, especially in light of his achievements in other categories all the way up to Formula 1: “It seems to me that I’ve never been as good a driver in other categories as I was in karting.”

The young Pole also found much interest in the technical aspects of karting, learning how to tune a chassis and its components at a time when technological tools were not as developed as today.

“I was very good with carburation, which was very important,” he explains. “In current days, there are a lot of sensors, data, displayed dashes, karting has moved forward as a technology. In the past, there was a small dash with RPM numbers and everything you were doing, like fine-tuning the carburation and the engine, it was by your ears.”

“I did learn very quickly thanks to my father. There were some hard lessons and I realized that I won much more than I should have won, just because I was more sneaky. Sometimes, because of speed, I could not win but I have won some races that were impossible to win.”

Following an impressive tally of six titles in three years in Poland, Kubica’s international achievements in karting between 1998 and 2000 include, aside from his two consecutive wins in the Italian Open Masters – ICA Junior, a double victory in the Monaco Kart Cup, a German Junior Championship title and a Trofeo Margutti win. In his last season in the sport, he finished fourth in the FIA Karting European and World Championships – Formula A before debuting in Formula Renault 2000.