Stan Pex took the KZ class’s final victory in the second round of the 2020 FIA Karting European Championship, held on Sunday at the International Karting Genk. Second of the race ahead of Jorrit Pex, Marijn Kremers collected enough points to be crowned European Champion, a few weeks after his return to karting with Ricciardo Kart! 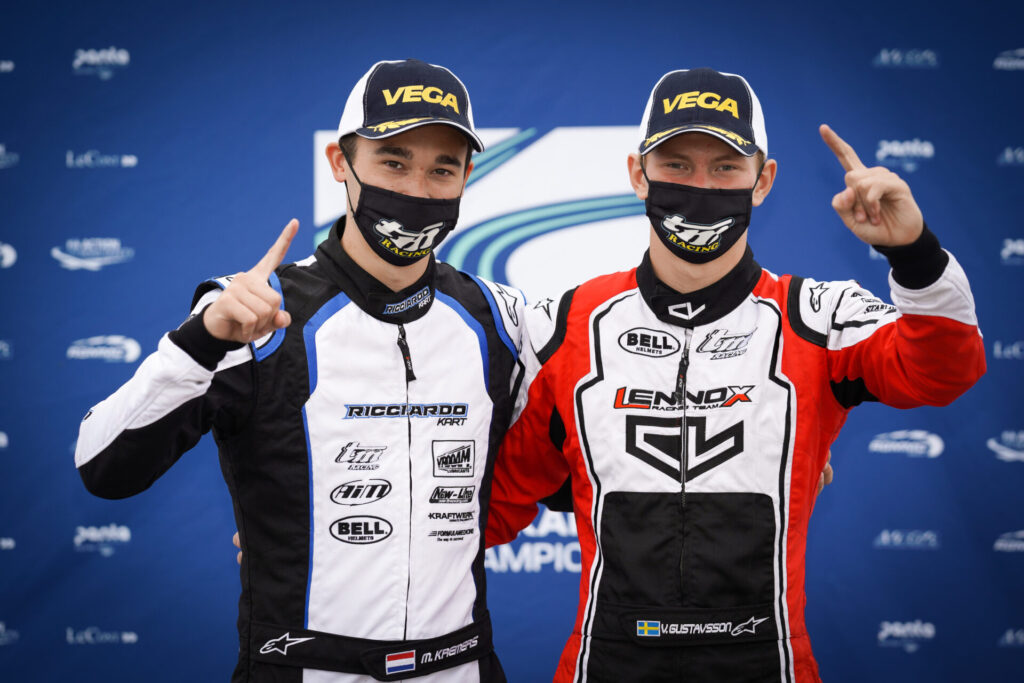 In perfect weather conditions, the last day of the Genk competition offered a high-quality show to the fans of close racing from all over the world. Although the field had suffered from the infection-control constraints imposed by the renewed prevalence of COVID-19 in Europe, the FIA Karting competition at Genk kept its promises in terms of sporting intensity.

The challenge wasn’t easy for Marijn Kremers (Ricciardo Kart/TM) at the beginning of the Final, because he had to get a good result while his rivals couldn’t score many points. Stan Pex (KR/TM) complicated his task by taking the lead in the Final on the fifth lap. Jorrit Pex (KR/TM) moved up to third place after taking back three places and it was further down the order that the Championship was being decided.

After a bad start, one of the three protagonists, Alessandro Irlando (Birel ART/TM) came back to fifth position, before a spoiler penalty relegated him to seventh place. Simo Puhakka (Tony Kart/Vortex) finished ninth without being able to defend his chances. Kremers was in control of the race and didn’t need to attack Stan Pex who he followed closely from beginning to end.

The Qualifying poleman Noah Milell (Tony Kart/Vortex) finished fourth in front of Adrien Renaudin (Sodikart/TM). Crowned FIA Karting World Champion – KZ in 2019, Kremers had planned to start this year in single-seaters but after the interruption caused by the pandemic, he could not resist the proposal from the Birel ART Racing team to resume karting. A beautiful title of FIA Karting European Champion – KZ rewarded his first-rate performance in karting.

The KZ category will be back on track from November 5th to 8th for the FIA Karting World Championship at the South Garda Karting of Lonato, in Italy.