The FIA Karting competition in Genk started this Friday afternoon, 4th September, with the Qualifying Practice for the second round of the FIA Karting European Championship – KZ/KZ2 and the FIA Karting Academy Trophy. The health constraints in force in Belgium concerning the Covid-19 required the implementation of a very strict protocol, which made it hard for a significant number of drivers to reach the Genk venue. Sweden’s Noah Millel and Viktor Gustavsson were the fastest in KZ and KZ2 respectively, while Belgium’s Tom Braeken was the Academy pole position holder. 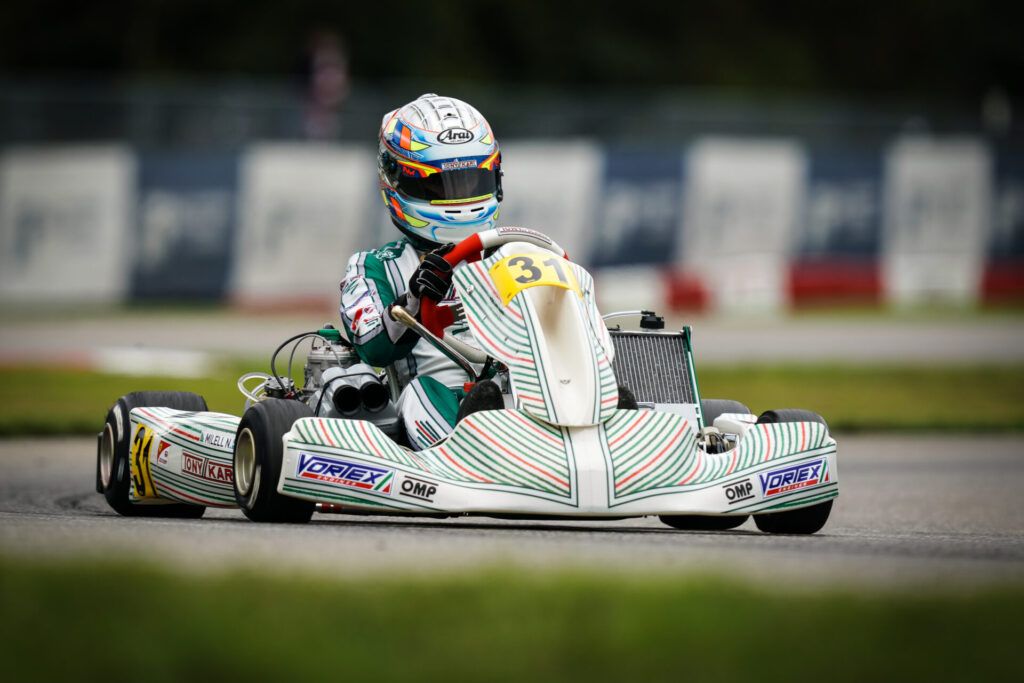 With a total of 70 participants, the field was significantly reduced compared to the first competition in Adria, in August. However, the standard was unquestioned thanks to the presence of the favorites in the title race and many talented drivers. The CIK-FIA has taken this new element into account in publishing a new timetable.

The weather wasn’t very pleasant at the Horensbergdam circuit of Genk. Light but persistent rain made it necessary to use the Vega rain tires from the Friday morning Free Practice sessions onwards. A light but persistent wind wasn’t enough to dry the track completely, and the sun remained hidden under heavy cloud cover. Less than an hour before the first Qualifying session, when the sky cleared slightly, the track was finally dry enough for the slick tires and the lap times improved significantly despite the temperature not exceeding 20°.

Noah Milell (Tony Kart/Vortex) achieved an amazing pole position in the Qualifying Practice of the FIA Karting European Championship – KZ in Genk against several top names in the category. However, the gaps were very small, with the top five being grouped together in less than a tenth of a second. Stan Pex (KR/TM) took second place four thousandths behind the poleman, while Marijn Kremers (Ricciardo Kart/TM) followed in third position in front of Matteo Vigano (Birel ART/TM) and Riccardo Longhi (Birel ART/TM). Simo Puhakka (Tony Kart/Vortex) and Alessandro Irlando (Birel ART/TM) were slightly dropped in seventh and eighth position.

As in Adria, although the conditions were very different, Viktor Gustavsson (Birel ART/TM) once again showed himself to be the fastest driver in the Qualifying Practice sessions of the FIA Karting European Championship – KZ2. He was four-hundredths of a second faster than the leader of Session 2, Senna Van Walstijn (Sodikart/TM). Tom Leuillet (Praga/TM) was third in front of Paavo Tonteri (Tony Kart/Vortex)) and Simone Cunati (Birel ART/TM). Leonardo Marseglia (Birel ART/TM) finished in the Top 10, Giuseppe Palomba (Birel ART/TM), fourth in the provisional Championship classification, was only 14th.

Living only a few kilometers from the circuit, Tom Braeken (BEL) made a point of being the fastest of the Qualifying Practice sessions for the FIA Karting Academy Trophy in Genk. He even relegated Zachary David (PHL), the fastest of Session 1, by more than four-tenths of a second. Gianni Andrisani (DEU) was also noticed in third position ahead of Jonathan Weywadt (DNK) and Matteo De Palo (ITA). Maxime Furon-Castelain (LUX) was eighth, whereas the leader of the provisional classification Connor Zilisch (USA) finished only 17th.

A live page is at your disposal from Friday to Sunday with live timing and live streaming (available on Saturday and Sunday). Reports and results will be published every day on this website.