The Qualifying Heats were intense on Saturday, 5th September, at Genk. Race incidents and underperformances shaped a new hierarchy for the Finals of the next day. The Dutchman Marijn Kremers took provisional command of the FIA Karting European Championship – KZ, while Germany’s David Trefilov took the lead in the KZ2 category. In the FIA Karting Academy Trophy, the Filipino Zachary David and the American Connor Zilisch are side by side. 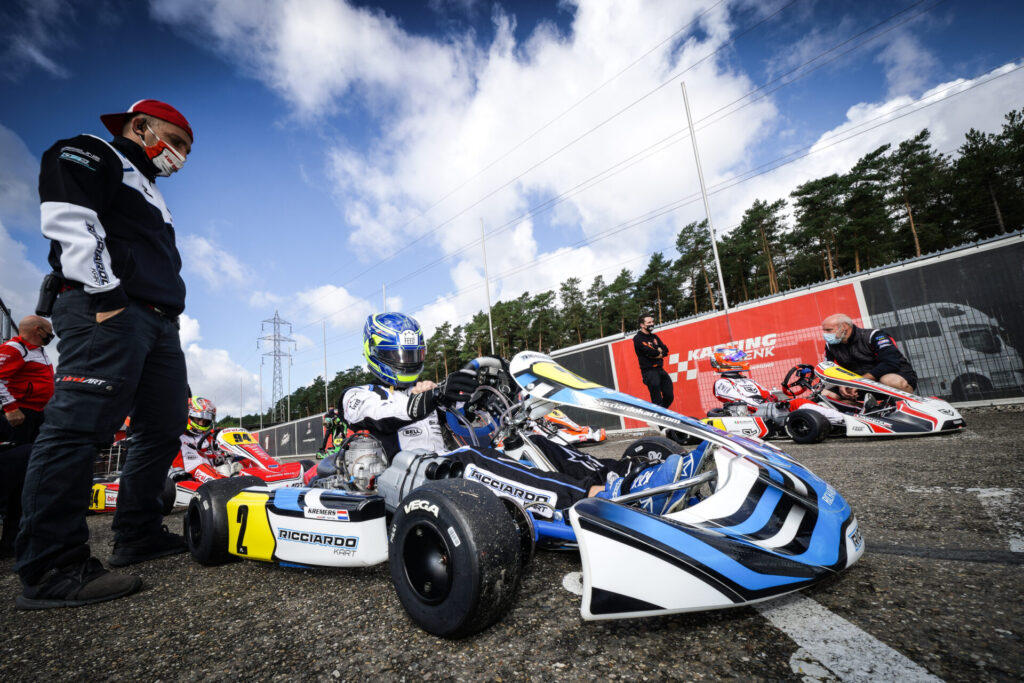 The morning rain gradually disappeared and only the first race of the day, the KZ2 Heat 1, was mostly run on rain tyres. Dark in the morning, the skies also cleared to light up the lively battles between the competitors on Vega slick tyres. At the end of the Qualifying Heats which ended on Saturday, the previous leaders of the FIA Karting European Championships – KZ/KZ2 lost a good part of their advantage and the awarding of the titles on Sunday could well hold surprises. Similarly in the FIA Karting Academy Trophy, the ranking is not immune to some changes during this Belgian competition, the penultimate meeting of the season for the young talents.

The collision between the top two drivers, Noah Millel (Tony Kart/Vortex) and Stan Pex (KR/TM), shortly after the start of the first Qualifying Heat of the FIA Karting European Championship – KZ set the tone. The relative discretion of the favourites in the provisional standings, Alessandro Irlando (Birel ART/TM) and Simo Puhakka (Tony Kart/Vortex) was the other notable element at this stage.

Marijn Kremers (Ricciardo Kart/TM) won the first heat and his two third places earned him the lead of the competition. Milell had two victories in an attempt to put his misadventure behind him and was second against his rival Stan Pex. Adrien Renaudin (Sodikart/TM) moved up to fourth place ahead of Riccardo Longhi (Birel ART/TM). Irlando was seventh in front of Puhakka. In pole position for the start of the Final, Kremers is also in a favourable situation for the European Championship.

While the track was still slippery, the first Qualifying Heat of the FIA Karting European Championship – KZ2 gave rise to some less than voluntary acrobatic moves. Senna Van Walstijn (Sodikart/TM) was the victim of this, as was Tom Leuillet (Praga/TM) who was deprived of victory at the last corner by Kristijan Habulin (TB Kart/TM), who was advantaged by his slick tyres but then penalised for this manoeuvre.

Viktor Gustavsson (Birel ART/TM), David Trefilov (Maranello/TM) and Van Walstijn were the three winners of the day. Trefilov took maximum points and pole position for the start of the Final on Sunday morning, ahead of four of the provisional top five drivers in the Championship standings: Simone Cunati (Birel ART/TM) in second, Paavo Tonteri (Tony Kart/Vortex) in third, both regulars at the front of the field, and Gustavsson who dropped to fourth ahead of Leonardo Marseglia (Birel ART/TM). Delayed in Heat 2, Giuseppe Palomba (Birel ART/TM) was only 13th.

The six Qualifying Heats of the FIA Karting Academy Trophy were certainly the most exciting of the day. Thanks to his victory in the last race, Zachary David (PHL) finished tied with Connor Zilisch (USA), the leader of the provisional ranking, who started from 17th place in Qualifying. Matteo De Palo (ITA) was also very consistent and finished third in front of the poleman Tom Braeken (BEL) who was delayed in the last race. Macéo Capietto (FRA) crashed at the last corner after his 14th-fastest lap time and took fifth place. Jonathan Weywadt (DNK) and Maxime Furon-Castelain (LUX) were 13th and 14th respectively.

A live page is at your disposal from Friday to Sunday with live timing and live streaming (available on Saturday and Sunday). Reports and results will be published every day on this website.