The Kosmic Kart Racing Department attended the first round of the Champions of the Future series, last weekend in Belgium. Luigi Coluccio, the team’s official driver, reached the top 10 in OK while Freddie Slater, under Ricky Flynn Motorsport’s colors, won the OK-Junior Final. 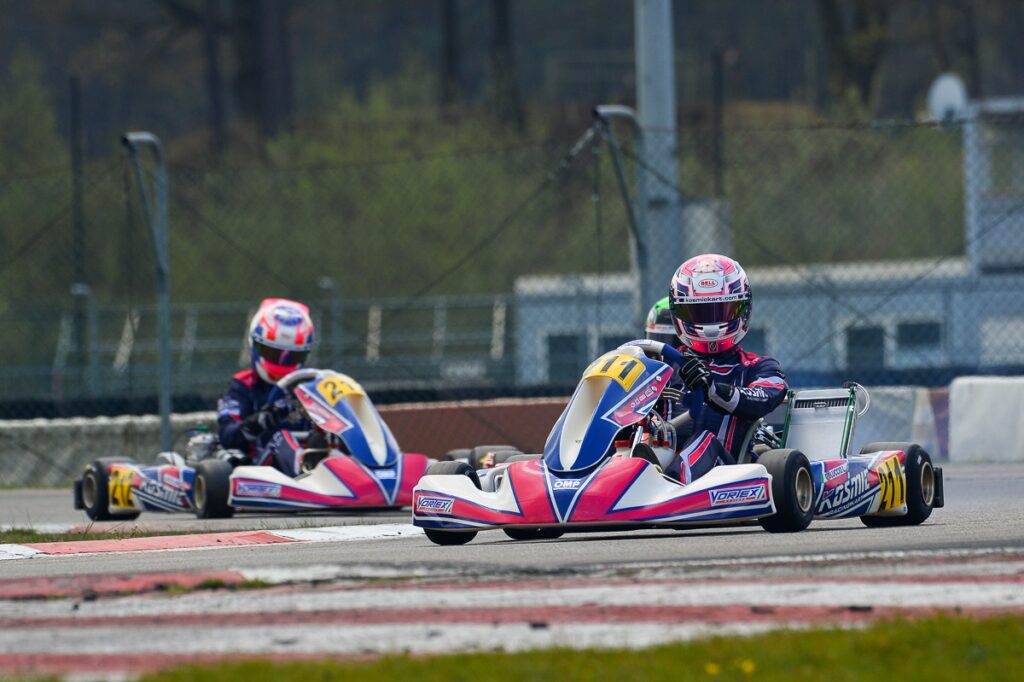 The six drivers of the Kosmic Kart Racing Department answered “present” at the first round of the Champions of the Future series, using the Kosmic Mercury R chassis equipped with Vortex DST and DJT engines.

On the OK podium a week earlier for the WSK Super Master Series, Luigi Coluccio showed again his pace in Belgium. The Italian achieved three third places in the eliminatory heats but, due to an incorrectly-positioned front fairing in the Pre-Final, had to start from further back on the Final’s grid. He nevertheless made his way through the field from lights out and finished among the top ten.

Sebastian Gravlund‘s recovery from the back of the field was difficult in the Final due to an unlucky retirement in the Pre-final. However, the Danish driver was able to gain experience in view of the next races. Jakub Rajski performed a dull weekend but it turned out to be a fundamental test for the FIA Karting European Championship.

In OK-Junior, Joël Bergström showed excellent speed skills for his first appearance with the Kosmic Racing Department. The Swedish driver obtained a top 10-result in the eliminatory heats, climbed not less than nine positions in the Pre-Final, and relentlessly fought during the Final.

Hugo Herrouin always drove in the wake of the top ten during the Qualifying Heats but an unlucky stop in his third race did not allow the French driver to enter the Pre-final. Physical problems forced Ean Eyckmans to end his race prematurely. The Belgian driver, therefore, preferred to remain at rest in view of the upcoming events.

It is worth mentioning the victory of reigning World Champion Freddie Slater, leading the OK-Junior Final from the start to the chequered flag with the Kosmic Kart-Vortex material prepared by Ricky Flynn Motorsport.

The Kosmic Kart Racing Department stays in Genk for the first round of the FIA Karting European Championship – OK/OK-Junior on May 13th-16th.