The fourth round of the 2021 WSK Super Master Series, attended by 316 drivers, named its winners, this Sunday at Lonato’s South Garda Karting. The KZ2 class saw the win of Emilien Denner but Marijn Kremers was crowned. The OK Final was won by Arvid Lindblad, as Rafael Camara clinched the title. In OK-Junior, both the final race and series went to Rashid Al Dhaheri, while Rene Lammers dominated in Mini. 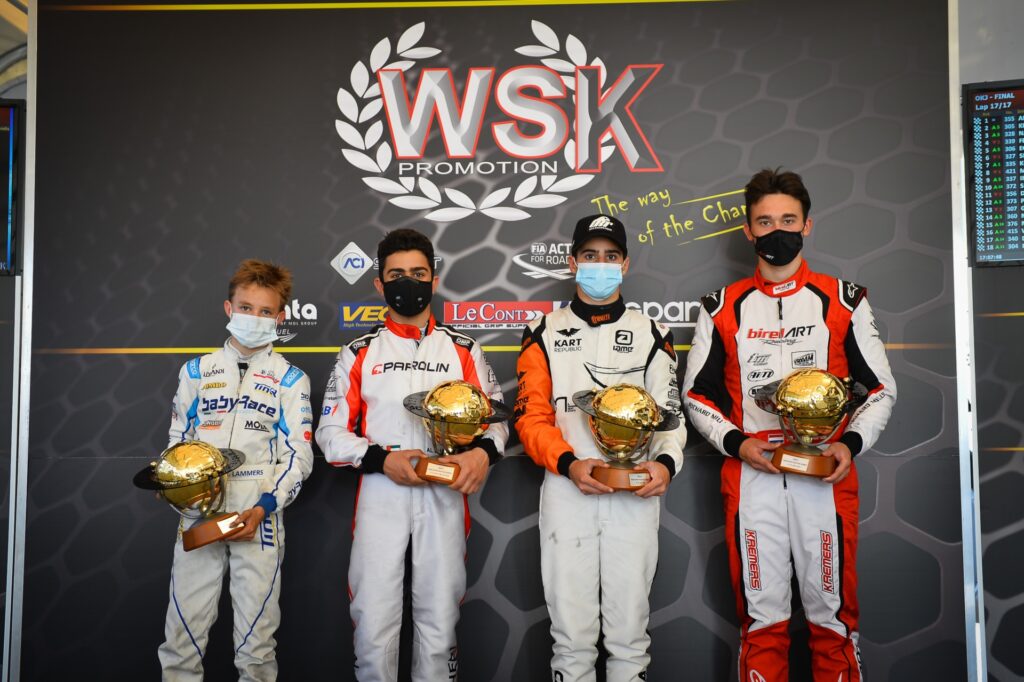 In OK, classification leader Rafael Camara (KR/IAME) won the first Prefinal after dominating the weekend. Prefinal B saw another strong interpreter of the category, Andrea Kimi Antonelli (KR/IAME), having the upper hand, which envisaged for a KR Motorsport duel on top.

In OK-Junior, Rashid Al Dhaheri (Parolin/TM) won Prefinal A, while classification leader from Jamaica Alex Powell (KR/IAME) was only eighth and saw his lead getting thinner. The victory of Prefinal B went to the Brazilian Matheus Ferreira (KR/IAME).

Mini’s Prefinal A was won by the Dutchman René Lammers (Parolin/IAME), who won the heats after a good comeback from Qualifying and a shared lead with the Spanish driver Christian Costoya (Parolin/TM). In Prefinal B, Costoya, despite being the most credited contender, slipped down to 13th. The victory went to the Romanian David Cosma-Cristofor (KR/IAME).

KZ2: Great win for Denner but Kremers gets the title

In KZ2, after a stop due to an incident at the start, Denner got the lead of the race and claimed a solid win, while Kremers installed himself soon in second place, finding his way past Renaudin, to claim the title. The third step of the podium went to the Dutch driver Stan Pex (KR/TM), who recovered four places. The previous classification leader, Juho Valtanen (KR/TM) did not go beyond eighth and therefore concluded the series in second place, leading Gustavsson.

In OK, the duel for the title involved Camara and Antonelli. A third driver of KR Motorsport, the Brit Arvid Lindblad, came out on top from this battle. He took the lead of the race, keeping it all the way to the chequered flag. The second place was enough for Camara to secure the title, while Antonelli had to settle for sixth after losing ground at the start. The third step of the podium went to the Italian Luigi Coluccio (Kosmic/Vortex). Antonelli ended the series in second place, while the final victory earned Lindblad the third position in the classification.

Rashid Al Dhaheri dominated OK-Junior in Lonato and secured the full haul that allowed him to take the lead of the standings, due also to the troubled weekend experienced by the previous leader, Alex Powell. Al Dhaheri secured a solid win in the Final, leading the Brit Harley Keeble (Tony Kart/Vortex) and the Japanese Kean Nakamura-Berta (Exprit/TM). Powell was 18th in the Final and ended third in the final classification, as he was overtaken also by the Brazilian Matheus Ferreira (KR/IAME), who was fourth in the Final.

Mini: Lammers dominates the Final and claims the title

In the final sprint to the Mini title, René Lammers had the upper hand and managed to get past his main rival Christian Costoya. The victory in the Final earned Lammers the title, while Costoya had a troubled Prefinal and recovered several positions in the last race but not beyond tenth. The Italian Emanuele Olivieri (IPK/TM) completed a good race ending second behind Lammers (both in the final and in the series). The Russian Vladimir Ivannikov (EKS/TM) did a good race and ended third. The Russian Gerasim Skulanov (CRG/TM) recovered a lot of places but had to settle for fourth.