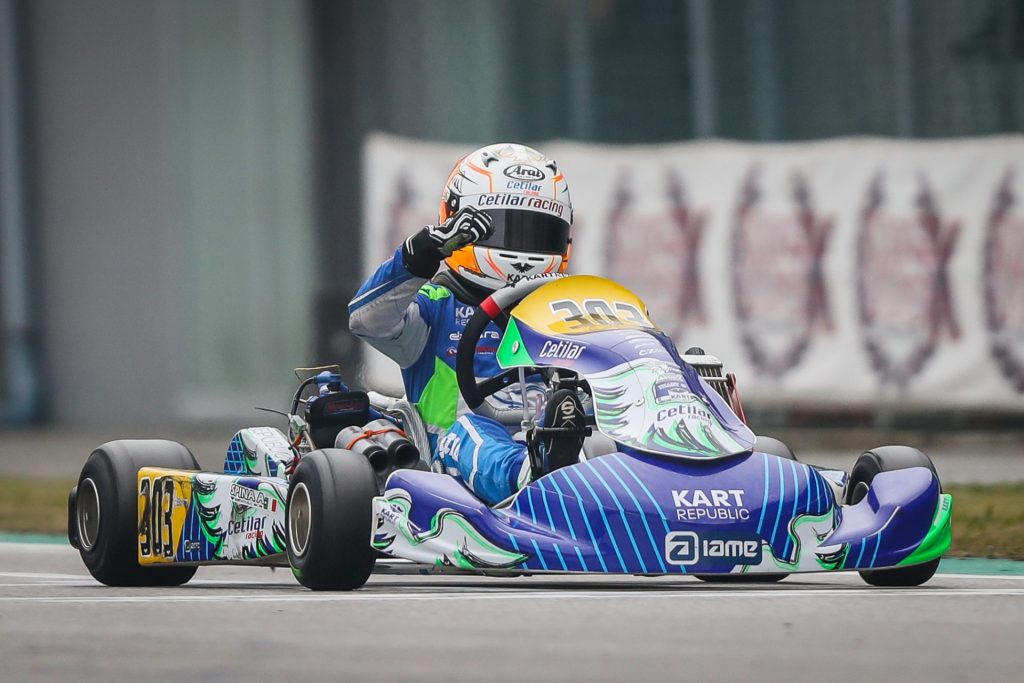 The Juniors were the first on track on Sunday afternoon using slick tires on the drying tarmac of Adria. Winner of the morning’s Prefinal A, Martinius Stenshorne (KR/IAME) inherited pole position ahead of Arvid Lindblad (KR/IAME), winner of the Prefinal B. At lights out, however, Alfio Spina (KR/IAME) surprised them both from the second row and took the lead. The Italian driver kept the first spot for the majority of the race but came close to losing it on lap 7 when an overtaking attempt from Lindblad turned into collision.

While the Brit lost some ground trying to keep control, Spina couldn’t hold the door to Ugo Ugochuwku (Kosmic/Vortex). The American briefly took the lead before Spina charged back, which left him defending against Martinius Stenshorne (KR/IAME). On Lap 12, Ugochukwu put two wheels on the grass in the start/finish straight and not only lost third place but also allowed Christian Ho (KR/IAME) to close in for battle, which resulted in a collision forcing him to retire.

Spina concluded his weekend on the highest step of the podium in front of Stenshorne and Ho who kept his result despite an investigation by the Officials regarding the incident with Ugochukwu. Artem Severiukhin (Tony Kart/Vortex) crossed the line in fourth place, followed by Lindblad.

The next meeting by WSK Promotion is Round 1 of the WSK Super Master Series taking place again on the Adria Karting Raceway from January 31st to February 2nd. A meeting you will be able to follow via The RaceBox.