Cold and rain formed the scene for the second racing day of the WSK Champions Cup at Adria Karting Raceway where teams and drivers had to roll up their sleeves in the remaining Qualifying Heats run in tricky track conditions. Thomas Ten Brinke (OK), Arvid Lindblad (OK-Junior) and Maciej Gladysz (Mini 60) topped the classes’ provisional classifications ahead of Sunday’s Prefinals and Finals. 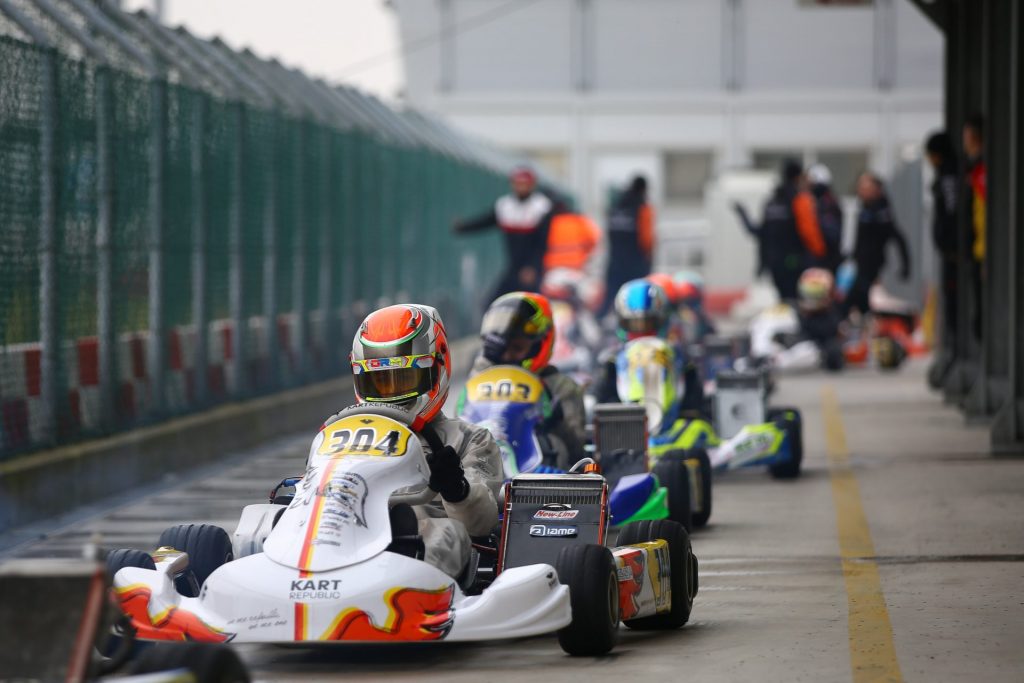 As expected, yesterday’s freezing but dry conditions turned into rain for most of Saturday, forcing drivers to put on wet rubber to better tackle the slippery tarmac of Adria.

The Qualifying Heats smiled upon Arvid Lindblad (KR/IAME) in the Junior category where the Brit clinched his second consecutive win after Friday, followed by a second and third-place finish. For a point, Lindblad inherited the provisional classification’s leading spot ahead of his KR Motorsport teammate Brando Badoer (KR/IAME), both starting from pole position in Sunday’s Prefinals A and B.

Alfio Spina (KR/IAME) completed the Top-Three with two successes in his tally, in front of Martinius Stenshorne (KR/IAME) and Miron Pingasov (KR/IAME) whose sole heat win put him on equal points (12) with the Norwegian driver. Robert De Haan (Energy/TM), seventh, also achieved victory before losing some ground in his last race, as for Ugo Ugochukwu (Kosmic/Vortex) who won twice but was eventually classified 13th because of a DNF in his second heat. Winner of one race, Giovanni Trentin (Parolin/TM) couldn’t keep up his early momentum and fell the class ranking down to 14th.

Saturday started with a surprise in the OK class when polesitter and first heat winner Andrea Kimi Antonelli (KR/IAME) didn’t feel well enough to take the wheel and had to watch both of his heats from trackside. The Italian will, therefore, start Sunday’s Prefinal B from the back end of the grid with little other options but to try to climb the field for a spot in Sunday’s Final.

2019 OK-Junior World Champion Thomas Ten Brinke (Kosmic/Vortex) maximized his chances by taking two wins and a second place, giving him the leading seat in the provisional classification. The Dutchman will start tomorrow’s Prefinal A from pole position, like Taylor Barnard (KR/IAME) in the B race thanks to one win and two second positions. Dilano Van’t Hoff (Exprit/TM) ended up in third place overall ahead of Laurens Van Hoepen (KR/IAME), winner of one heat, and Nikita Bedrin (Tony Kart/Vortex). Kirill Smal (Energy/TM) took the penultimate race win of the day but only managed a 13th place in the rankings due to a cold start (19th) on Friday.

Maciej Gladysz (Parolin/TM) made good use of his pole position by claiming three wins in a row concluded by a second place which earned him the first position in Mini 60’s point standings. Anatoly Khavalkin (Parolin/TM) won two heats along with second and third place-finishes synonymous of pole position for the Prefinal B. Dmitry Matveev (Energy/TM) also grabbed a heat win and classified third ahead of Jan Przyrowsky (Parolin/TM) and Guillaume Bouzar (Parolin/TM). Other race wins went to Yuanpu Cui (Tony Kart/TM), 10th, René Lammers (Parolin/TM), 12th, whose efficient tally couldn’t make up for a distant 25th place-finish in his opening heat, and Gerasim Skulanov (IPK/TM), 16th.

The WSK Champions Cup enters his last and most decisive stage on Sunday with the morning’s Prefinals drawing the starting order for the afternoon’s Finals in each class. Tune in from 09:00 am on our live timing page (streaming at 10:30 am) to follow the action up close!