On the second weekend of May, while some karting facilities in Europe were only partially reopening for private practice, the Asum Ring of Kristianstad, in Sweden was given the green light to organize its first race for a limited number of drivers under strict safety measures. 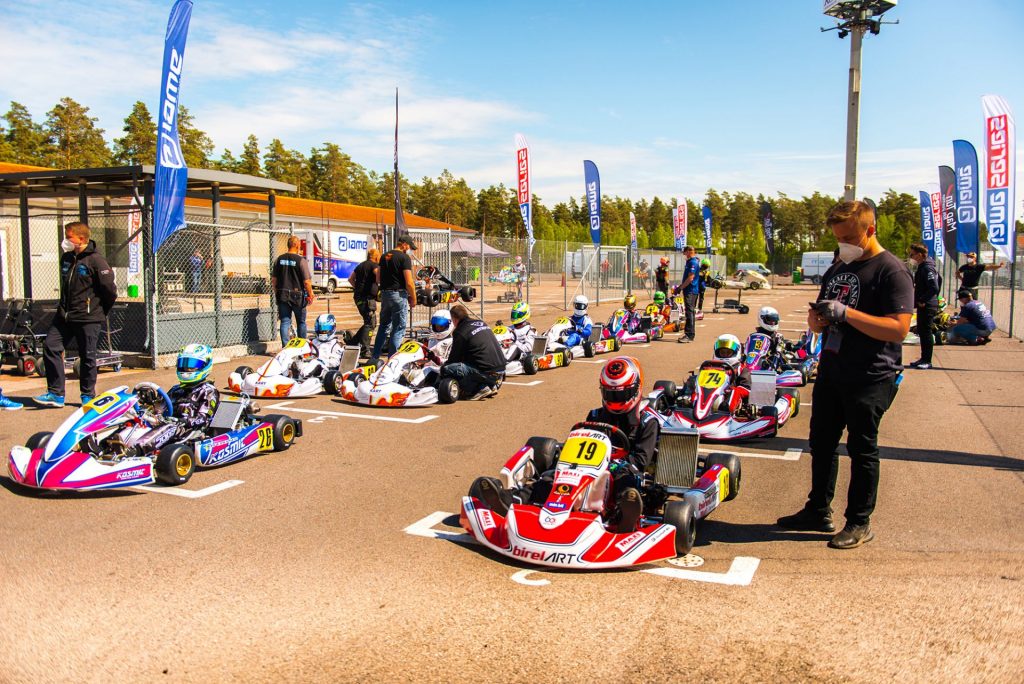 After a winter that “felt longer than ever thanks to the Covid-19 situation”, some key people involved in the karting business in northern Europe came up with a plan: organize a proper race.

While some karting facilities in other countries were given permission to partially reopen, but only for private kart owners to practice, the health situation in Sweden allowed to go one further step.

“The tracks had been open in Sweden for free practice, so we thought that an organized and controlled event is much safer for participants than the free practice without real control,” explains Mikko Laine when we reached him on the phone.

“The local authorities and federation did not allow us to organize a race linked to an existing series because it would encourage people to travel,” he specifies. “In Sweden, they imposed a limit of 50 people for gatherings, so we thought ‘ok let’s do a race with 25 drivers and 25 mechanics [per category, ed.] and no one else allowed in the paddock.”

Laine, a former successful karting driver turned racing organizer, got involved from Day 1 with Maptun Performance, the Kristianstad Karting Klubb and Kenneth Hildebrand, owner of KH Racing, to build from scratch what would become the ‘Maptun Event’, a stand-alone meeting taking place on the Asum Ring of Kristianstad on May 9th and 10th.

“It took us two weeks to organize the event, working 24/7 to make it happen. Kenneth was mainly in charge of contacting the teams and drivers, talking to the federation, and I would deal with the logo, the regulations, the timetable,” Laine says. “Nobody else in the country got permission to organize such an event. So, we had to be quite innovative, thinking out of the box and come up with new solutions.”

“The global response from drivers was super positive. Still, there was a bit of politics in the background with some dealers not being particularly happy because they did not organize the event. So, they called their own customers to ask them not to come or that the race would never happen, etc. It’s unfortunate but there’s always been politics in karting.”

With the participants’ health as the top priority, social distancing and masks were compulsory everywhere in the circuit’s area. “As you know, the paddock area at Kristianstad is quite big, so we divided it with fences to isolate all participants, so they could not interact with each other in the zone,” Laine explains.

From an organization’s point of view, the exceptional circumstances and the limitation of 50 drivers on location made Laine and his partners’ life somewhat easier. “It only takes half a day for each category, it’s so much lighter,” reckons the Finn. “Usually, a karting event goes from Wednesday to Sunday, that’s a lot of time spent away from family and school. The way we did it, drivers spend only Saturday or Sunday on track and can go back home on the same day.”

Each class had a four and half hour race and the classes weren’t in any contact with each other in their own restricted paddock area. Junior 60, the equivalent of Mini or Mini 60 on the international scene, and Junior 125 were arranged on Saturday, and Senior 125 and KZ2 drove on Sunday.

The race day consisted of a 15-minute Warm-up, a five-minute Qualifying, four eight-minute heats + 1 lap, and a 12 to 15-minute Final + 1 lap. “If you count the Warm-up, Qualifying, the four heat races, and the Final, drivers actually had more track time than in a normal event, also because the timetable was more condensed, there was less waiting on the pre-grid between each session,” Laine underlines.

“We also made sure to stay on schedule on much as possible. For instance, after eight minutes in each heat, the leader would still have one more lap before crossing the chequered flag. In that way, even if its raining or snowing, we always stay on schedule, which is crucial for the event to run properly.”

Results-wise, Scott Lindblom took the win in the Junior 60 Final, imitated in Junior 125 by Junior Jonsson who stood on top of a 21-driver field. On Sunday, Oliver Ahrenstedt defeated Max Sjölander in a Senior 125 Final filled with 19 competitors while the former World Vice-champion Benjamin Törnqvist took victory on home soil in a thrilling KZ2 race against DTM driver Joel Eriksson and the reigning KZ2 European Champion Emil Skärås.

“The driving standards in the races were very high with very few incidents on track,” Laine noticed. “It came from the fact that, in the timetable, you had a 20-minute break between each heat, so the drivers knew that they would not have enough time for repairs in case something happened on track.”

“Everything sent super smoothly and participants were happy about the concept. That could be a decent kind of way to organize other events. We think we could do around four or five events within a season, once the situation is back to normal,” Laine concludes.

“The efforts of all the event’s partners made it possible to make a successful comeback, but it was very different from the usual races, let’s not hide it. Safety must take precedence over any other consideration, so we have to get used to this new constraint which is likely to be with us for a long time to come,” adds Magnus Hedman, President of the Kristianstad Karting Klubb, in a recent interview with FIA Karting.