Andrea Kimi Antonelli is the first winner of the 2020 FIA Karting European Championship – OK! The Italian took the final win of the weekend on the Circuito Internacional de Zuera after a long battle against Taylor Barnard, who emerged as the man to beat under the Spanish heat! Nikita Bedrin, third, confirmed his ambitions in this year’s competition by putting on a great resistance in the fight for victory on Sunday. 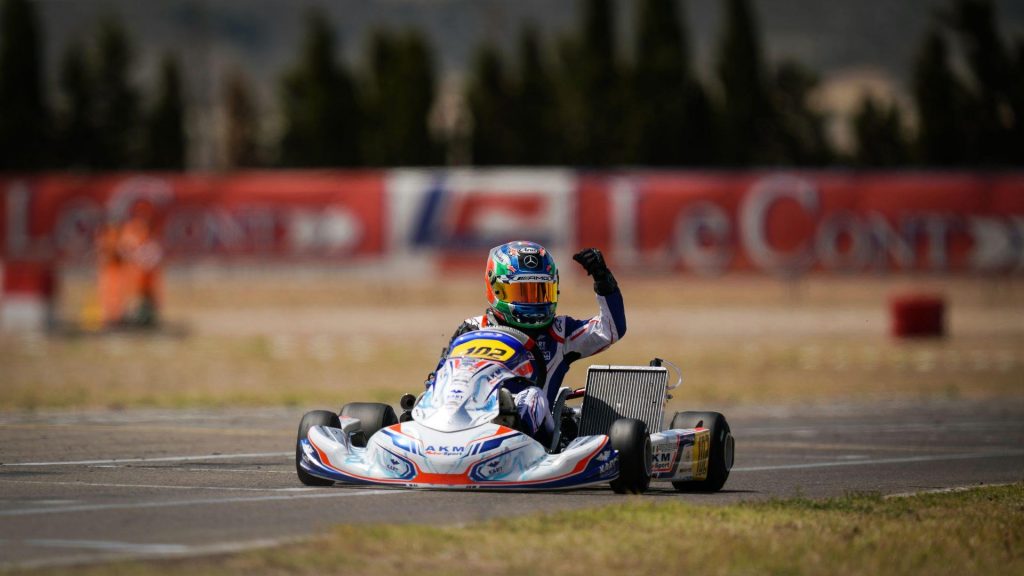 Unbeaten during Qualifying and throughout his four heats, Taylor Barnard (KR/IAME) was hoping to continue his dominance in the OK Final. But from the very first lap, the driver of the Rosberg Racing Academy was surprised by the young and determined Nikita Bedrin (Tony Kart/Vortex).

The overtaking was then to continue with great intensity, finally to the advantage of Andrea Kimi Antonelli (KR/IAME) who managed to pass Barnard then Bedrin in the space of two laps. “Even though I didn’t win as many Qualifying Heats as my rivals, I wasn’t worried about my chances of winning,” said one of the most promising drivers of his generation. “My technical team and I worked hard to be fast throughout the Final and it worked out as we wanted it to. I also set the fastest lap in the race, which confirmed our level of performance.” Once past Bedrin, Barnard continued to attack until the end without being able to reduce the small gap of four-tenths taken by his rival.

The duel for fourth place was the subject of an intense battle between several drivers who finished wheel to wheel under the chequered flag. Joe Turney (Tony Kart/Vortex) completed his eight-place progression in this position, ahead of Laurens Van Hoepen (Birel Art/TM Racing) and his British team-mate Oliver Gray. European Champion in the category in 2018, Hannes Janker (KR/IAME) returned to his highest level but, despite starting on the front row, fell back to seventh in the Final, ahead of Enzo Trulli (KR/IAME). The Spanish driver Maya Weug (Birel ART/TM) had her best performance at this level and finished ninth, with the best comeback of the Final (+24 places) going to Rafael Chaves Camara (Exprit/TM Racing).

Check out the complete results of the OK Final here.

The Second Round of the FIA Karting European Championship – OK/Junior will take place on the Circuito Internazionale di Napoli of Sarno, in Italy, from August 20th to 23rd, 2020.