After the morning warm-ups in the two categories of OK and OK-Junior, no less than 20 heats followed one another on the second official day of the FIA Karting European Championship, with the same main theme: very close gaps between the drivers, exciting duels and plenty of overtaking. At Zuera in Spain, Arvid Lindblad took the lead of the provisional Junior standings, while Taylor Barnard confirmed his pole position in OK. However, we will need to wait until the last Heats on Sunday morning to find out the definitive starting order for the Finals. 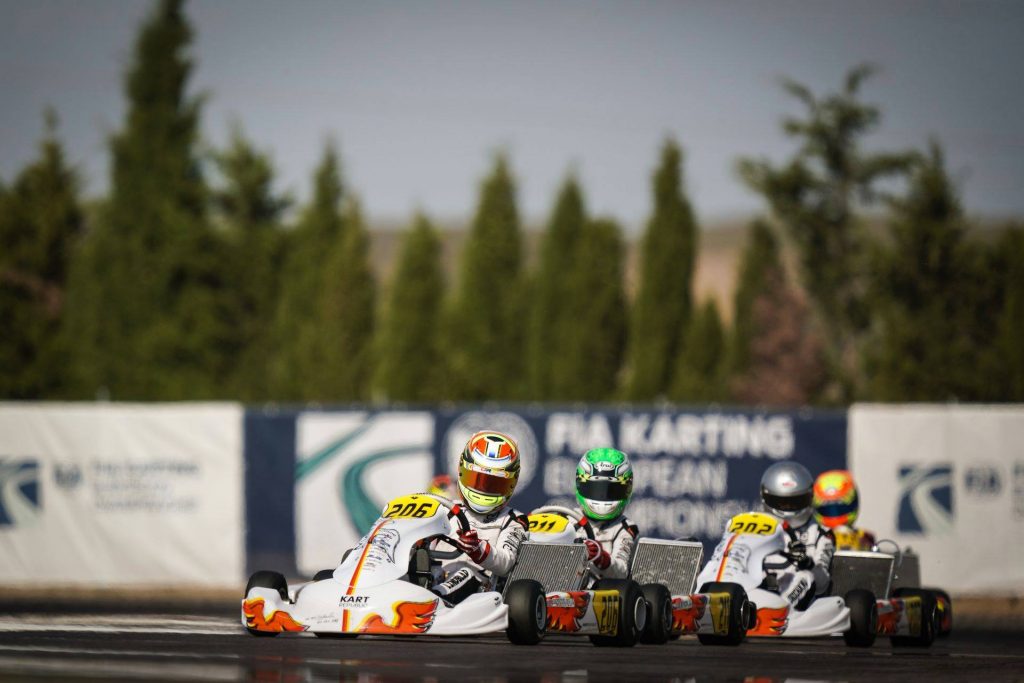 Getting to grips with the fast Zuera track, the longest of the season at 1,699 meters, remains difficult, especially as the vast majority of drivers were learning this circuit as part of the FIA Karting Competition. It is true that the previous event at this level for direct-drive karts in Aragon was held in 2016. Here, perfect use of the slipstream phenomenon makes it possible to easily gain places, but the slightest difference in the racing line can be very costly! Hence the heats that were particularly hard-fought in the Spanish heat, with an organisation that was put to the test.

On Friday evening, several drivers were disappointed with their result of Qualifying and were keen to move up the rankings. The hierarchy changed frequently throughout the day and it is still difficult at this stage to predict a potential winner.

British hopeful Taylor Barnard (KR/IAME) took pole position and remained in control in each of his three Qualifying Heats. With two victories, the German Hannes Janker (KR/IAME) proved that he had returned to the level he was at when he was crowned European Champion in this category in 2018. Andrea Kimi Antonelli (KR/IAME) and Nikita Bedrin (Tony Kart/Vortex) each won a heat and remain potential winners.

Both of them racing in Birel ART chassis for the Charles Leclerc by Lennox Racing Team, Oliver Gray and Laurens Van Hoepen are in ambush, ready to seize the slightest opportunity to move up in the rankings. Marcus Amand (KR/IAME) made one of the best progressions of the day and Norton Andreasson (Tony Kart/Vortex) finished with a victory after two difficult heats. Although Maya Weug (Birel ART/TM) was the best representative of the Spanish delegation in Qualifying, the 2016 World champion Pedro Hiltbrand (Tony Kart/Vortex) took over on Saturday, frequently putting himself in the spotlight.

Beaten narrowly by Igor Cepil (KR/IAME) in the first race of the day, Arvid Lindblad (KR/IAME) managed the next three races perfectly and won with brilliance. Brando Badoer (KR/IAME) put in the same performance by winning three times, but settled for seventh place in one of the races. Valerio Rinicella (Parolin/TM), who had been on pole position the day before, held his position despite the pressure of his rivals, finishing with two wins and two second places.

Dion Gowda (Kosmic/Vortex), Tuukka Taponen (Tony Kart/Vortex) and Nikola Tsolov (KR/IAME) took the other three wins of the day. The contenders for the podium are numerous, including Alex Powell (KR/IAME), Evan Giltaire (Sodi/TM) and Lorens Lecertua (FA Kart/Vortex) who raced with consistency, as did the top Spaniard of the day, Bruno Del Pino (Tony Kart/Vortex).

Drivers will be back on track from 08:00 am on Sunday for their Warm-up sessions, followed by the last Qualifying Heats and Finals that you can follow on our live page!