Tuukka Taponen pulled an impressive drive in the Junior Final at the opener of the FIA Karting European Championship, on Sunday at Zuera! The Finn, who only started ninth on the grid, managed to climb the field up to first place, defeating all the weekend’s contenders including Ugo Ugochukwu and Brando Badoer joining him on the podium! 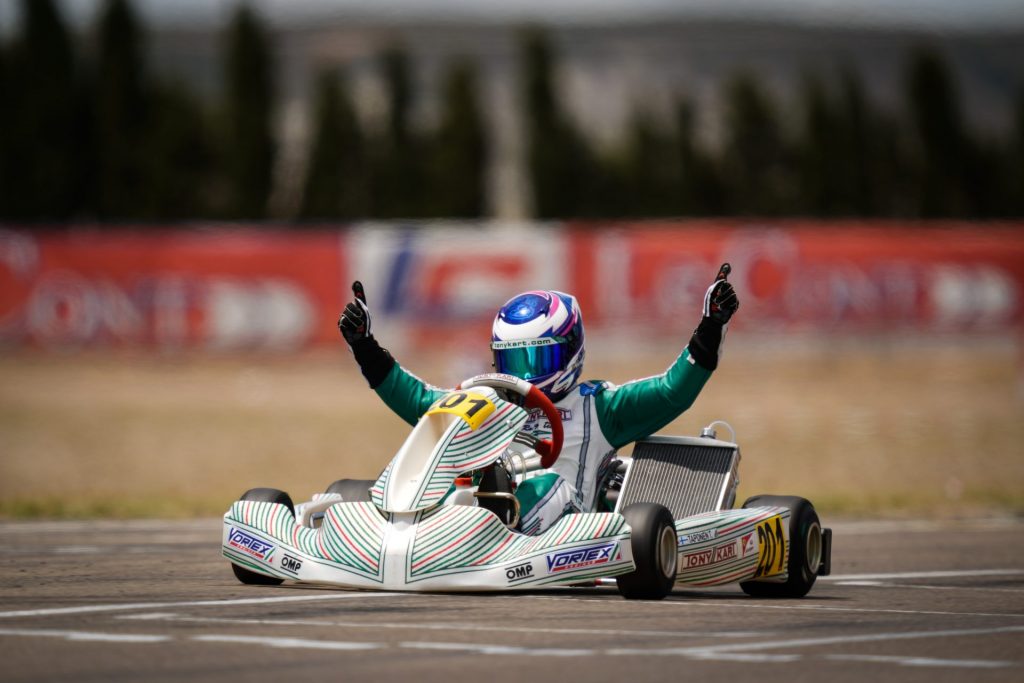 In Spain, Tuukka Taponen (Tony Kart/Vortex) started his European Championship as he started the previous one in 2019: with a victory! The young Finn won with panache, as he started a distant ninth on the grid for the Final after a slight disappointment in his first heat on Saturday morning. “I managed to gain two places on the first lap,” commented Tuukka, “Then the fight was relentless in the pack. I was confident because we never stopped improving the equipment over the weekend. I was getting quicker and quicker as the laps went by and that allowed me to gain places regularly to get to the front under the chequered flag. I hope to confirm this at the next Competition in Sarno.”

The suspense for the podium remained intact right up to the end. Ugo Ugochukwu (KR/IAME) never gave up and was rewarded for his efforts with a second place on the starting grid. With two laps to go, the American took the lead over Brando Badoer (KR/IAME). “Victory was not far away, but it is still satisfying to be on the podium of an FIA Karting European Championship for the first time,” said the Italian, son of the former Formula 1 driver.

Arvid Lindblad (KR/IAME/LeCont), the leader at the end of the Heats, was not able to maintain his position and had to settle for fifth place behind his team-mate Alex Powell (KR/IAME/LeCont), who has been making a great comeback since the Free Practice sessions. Ranked sixth just ahead of Tymoteusz Kucharczyk (RK/TM Racing), Valerio Rinicella (Parolin/TM Racing) will remain the revelation of the Spanish Competition. At home, Bruno Del Pino (Tony Kart/Vortex) was hoping to keep his place in the top ten before having to settle for 13th place.

Check out the complete results of the Junior Final here.

The Second Round of the FIA Karting European Championship – Junior will take place on the Circuito Internazionale di Napoli of Sarno, in Italy, from August 20th to 23rd, 2020.