The weather was beautiful on Saturday, 15th August, on the Adria circuit for a hot day dedicated to most of the Qualifying Heats for the first Competition of the FIA Karting European Championship – KZ & KZ2 and the FIA Karting Academy Trophy. The Finn Simo Puhakka dominated KZ with two victories, while Jonathan Weywadt and Connor Zilisch shared the lead in the Academy standings. Four drivers stood out in KZ2: Danilo Albanese, Viktor Gustavsson, Simone Cunati and Paavo Tonteri. 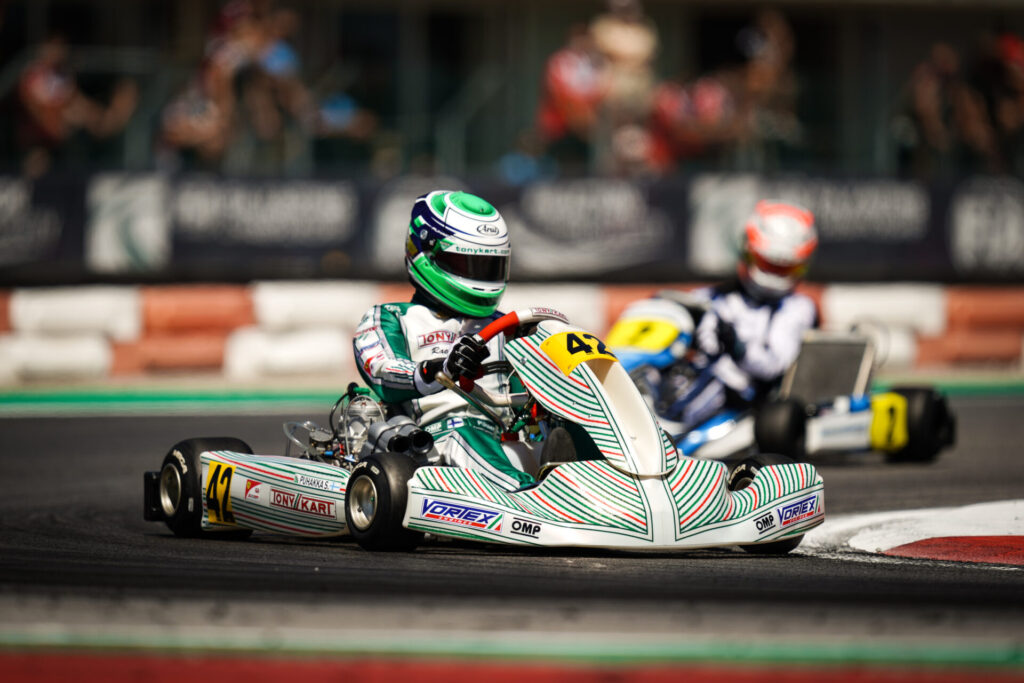 This time, the weather remained fine all day with high temperatures. The races were hard-fought by highly motivated competitors but overall very honest in their racing behaviour. The Qualifying phase will end on Sunday lunchtime with the last six heats of the programme before concentrating on the three Finals.

The day did not go as planned for the poleman Alessandro Irlando (Birel ART/TM). Somehow, the starts were not in his favour. Simo Puhakka (Tony Kart/Vortex) won both heats after leading from start to finish. Reigning World Champion Marijn Kremers (Birel ART/TM) was second ahead of Irlando in heat 1, while Riccardo Longhi (Birel ART/TM) finished second in heat 2. With the third and final heat taking place on Sunday morning, Puhakka leads ahead of Kremers, Irlando, Longhi and Matteo Vigano (Birel ART/TM).

There was no shortage of battles during the seven Qualifying Heats contested today in the FIA Karting European Championship – KZ2. There are three more to go on Sunday morning, two for Group B and one for the other groups, before the list of 36 Finalists is announced. Viktor Gustavsson (Birel ART/TM), Simone Cunati (Bitel ART/TM) and poleman Danilo Albanese (KR/IAME) each won two heats, while Paavo Tonteri (Tony Kart/Vortex) won once.

Cunati and Gustavsson are currently leading the provisional standings but the Swede has two more races to go on Sunday morning. Albanese lost a lot of ground with a mechanical retirement while Tonteri remained in the leading group with Giuseppe Palomba (Birel ART/TM) and Leonardo Marseglia (Birel ART/TM).

With four heats and four different winners, the FIA Karting Academy Trophy keeps its promise of equality with its Exprit chassis, the Vortex engines regularly exchanged between the first and the last, and Vega ‘Option’ tyres. Starring this Saturday, Jonathan Weywadt, poleman Keanu Al Azhari, Maxime Furon Castelain and Connor Zilisch took a victory each. The Luxembourger distinguished himself by setting the fastest time of his two heats of the day. Weywadt remained the leader, tied on points with Zilisch, who moved up seven positions.

Furon Castelain was third with the same score as Macéo Capietto who took two strong second places. Alex Powell dropped back to fifth position ahead of Al Azhari, delayed by his sixth place in the second Heat and was tied with Tom Braeken. Oscar Wurz was fifth in the Timed Qualifying session but dropped back to 13th. Italian driver Matteo De Palo, who set the 14th fastest time, lost ground due to a front fairing penalty and ended up in 20th place. All the participants will start their last Heat on Sunday morning to decide the positions on the grid for the Final.

A live page is at your disposal on this website from Friday to Sunday, including live timing and live streaming (only on Saturday and Sunday).

Reports and results are also published on a daily base.