The Friday, 14th August, initially experienced stifling temperatures and high humidity. The approach of a storm delayed the running of the FIA Karting Competition in Adria a few minutes before the start of Qualifying Practice. The program resumed after a one-hour break, in much cooler weather. In the FIA Karting European Championship – KZ, Alex Irlando took pole position, while Danilo Albanese dominated the KZ2 category and Keanu Al Azhari was the fastest in the FIA Karting Academy Trophy. 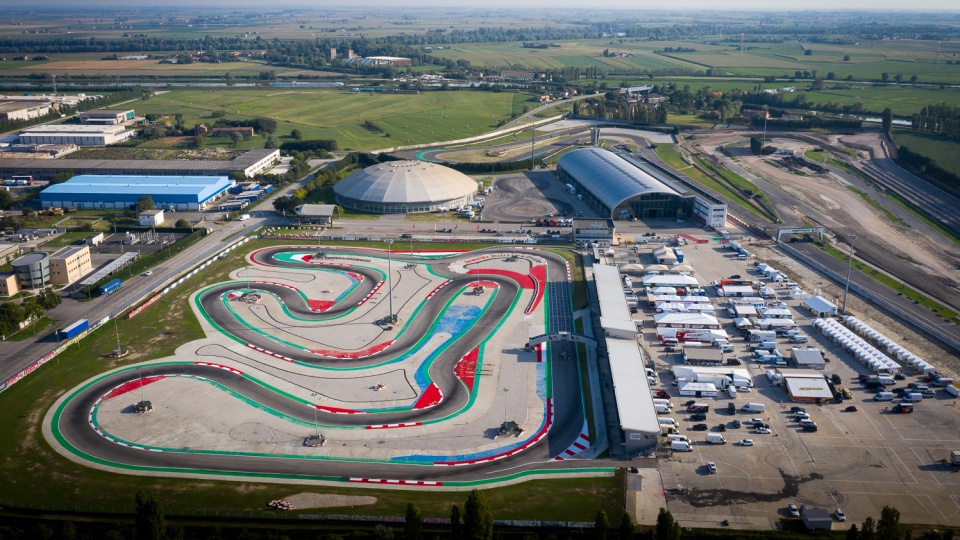 The new racing format introduced by the CIK-FIA found a favorable response in the Adria paddock. The vast majority of the teams are convinced by the limitation of official Free Practice sessions to Friday only, just before the start of Qualifying. The reduced tire budget is clearly appreciated by the whole paddock and the three sessions in each category were very well attended.

The Adria Karting Raceway hosts the first Competition of the FIA European Karting Championship – KZ & KZ2, as well as the FIA Karting Academy Trophy from 13th to 16th August. The competition promises to be a tough one on the 1302 m Italian track, known to be demanding for drivers, equipment and tires in any circumstances. With the high ambient heat in this scorching mid-August and increasing humidity, conditions are even more difficult for the 115 Drivers racing in the Veneto region.

Shortly before the start of the Qualifying Practice, a strong wind, a serious threat of rain and thunderstorms nearby necessitated a one-hour interruption to the program. The storm gradually moved away from the circuit. By the time the action resumed, the asphalt was still dry but the air temperature had dropped by almost ten degrees.

Francesco Celenta (Praga/TM) had set the fastest time in the first Free Practice session, but Alex Irlando (Birel ART/TM) kept up the pace in the final session after the stormy period. Marijn Kremers (Birel ART/TM) was already in the leading group with Fabian Federer (Maranello/TM) and Riccardo Longhi (Birel ART/TM).

During the Qualifying session, Irlando was on the rise to finish in pole position with a remarkable last lap of 47”720 which put him 0.121” ahead of Simo Puhakka (Tony Kart/Vortex). Kremers was in third place just three hundredths behind the runner-up. Lorenzo Camplese (Tony Kart/Vortex) was fourth ahead of Longhi. Federer had to settle for 13th and Jorrit Pex (KR/TM) was unable to complete a single lap.

“I gave my all to be in front in the Timed Qualifying session,” explained Irlando. “I know this track well and I know that it is not always easy to overtake in KZ. As I want to do better this season than in 2019, I did everything I could to take pole position to start this Competition.”

Albanese confirmed his level of performance with a lap time of 47.412 seconds on pole position in the second session, followed by Viktor Gustavsson a tenth of a second further. Third place went to Session 1 leader Tonteri, with Giuseppe Palomba two-tenths off pole position then Simone Cunati (Birel ART/TM), the fastest of the third session.

“I’m very happy to have been the fastest after all the development work I’ve done alongside Dino Chiesa,” said Albanese. “It’s very rewarding to be on pole with a Kart Republic chassis and I’m looking forward to continuing this pace all the way to the Final.”

The Dane Jonathan Weywadt was particularly fast during the Free Practice sessions of the FIA Karting Academy Trophy. Rafael Modonese, Matteo De Palo, Oscar Wurz and Ariel Elkin were also among the drivers to watch.

“I am very proud to have achieved pole position in the first Competition of the FIA Karting Academy Trophy for the United Arab Emirates”, confided the young Al Azhari. “It is an honor for me to represent my country.”

Check out the Qualifying results in KZ, KZ2 and Academy Trophy.

A live page is at your disposal on this website from Friday to Sunday, including live timing and live streaming (only on Saturday and Sunday).

Reports and results are also published on a daily base.