The Adria Karting Raceway is the scene of the second FIA Karting Competition of 2020 with the opening round of the FIA Karting European Championship – KZ/KZ2, as well as the first of the three FIA Karting Academy Trophy races, taking place from 13th to 16th August. Get up to speed with our practical guide, including timetable, favorites, weather forecast, class description and circuit information. 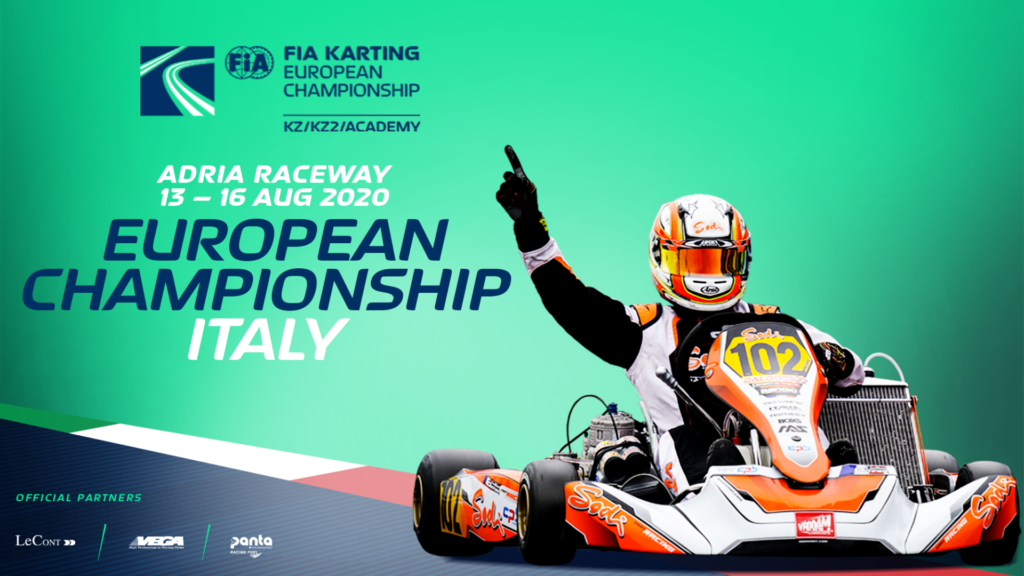 Temperatures will be high in the Adria region in mid-August with rain expected from Thursday to Saturday, while Sunday should be mostly sunny for the closing heats and finals.

The Adria circuit appeared on the calendar following the disruption caused by the COVID-19 pandemic. The track in Veneto had already successfully organized a CIK-FIA Competition in 2016 (see below) and is also frequently used by many international competitors. The 1302 m layout, which is fast and rolling, is characterized by wide asphalt clearances.

Among the 25 entered, other prestigious drivers will be aiming for victory. Fabian Federer, Adrien Renaudin, Matteo Viganò, Jérémy Iglesias, Simo Puhakka and Riccardo Longhi are among the contenders for a title that promises to be wide open.

A slightly lower figure than last year, the number of entries in the FIA Karting European Championship – KZ2 is nevertheless very respectable in these difficult times. It is impossible to make a serious prediction as the competition is full of talents who are capable of shining.

Five drivers from the 2019 Top 10 will be competing, including Giuseppe Palomba, third last year, Simone Cunati, Giacomo Pollini, Jean Nomblot and Senna van Walstijn. Also to be reckoned with are Alessio Piccini, Alexander Schmitz and Andrea Dalè who was crowned in 2014. In addition, there are a number of drivers who are capable of making a good impression on the Adria circuit.

The FIA Karting Academy Trophy is entering its second decade, continuing to find young talents from all over the world competing at the wheel of the one-design karts made available to them. Once again this year, the Exprit/Vortex kart with Vega tyres will allow all participants to express their talent on equal terms. Despite the difficulties of traveling from certain countries, the list of participants still includes 45 names and 43 nationalities.

A live page will be at your disposal from Friday to Sunday, including live timing, by Apex Timing, and live streaming, by RGMMC (available on Saturday and Sunday).

Reports and results will be published on this website on a daily base.