After a long period of waiting, the Rotax MAX Challenge Euro Trophy finally kicked-off its third season! The Belgian karting track of Genk, the so-called “Home of Champions”, hosted the first of four rounds of the unique European series for the various Rotax MAX class competitors. 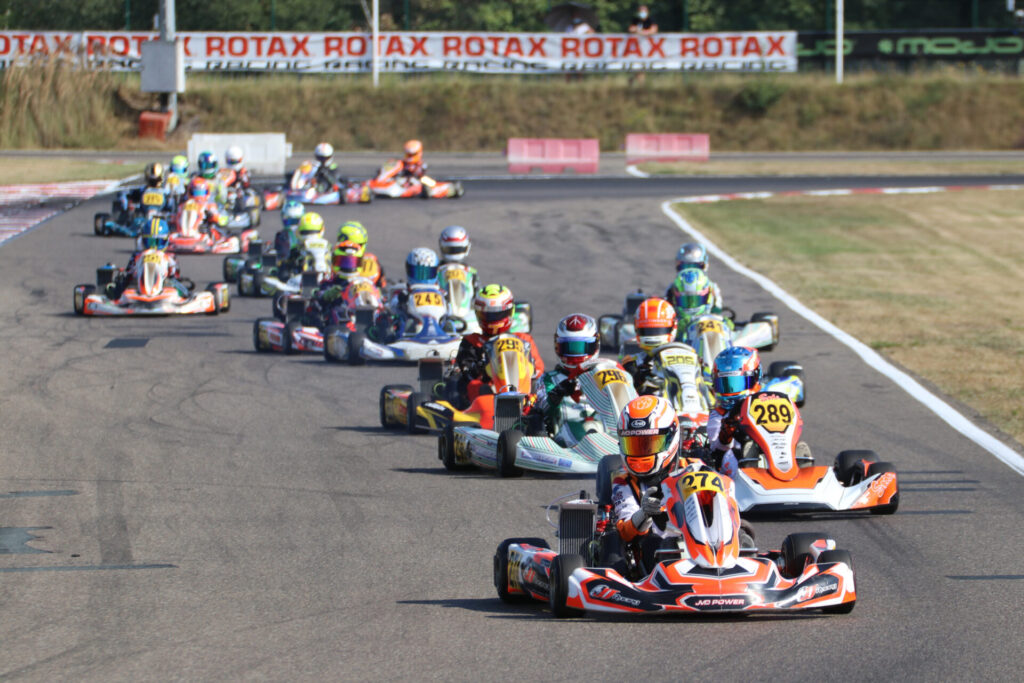 When one looks back to February when the organizers of the RMC Euro Trophy held the RMC Winter Cup race in Spain, welcoming no less than 200 drivers, it was the prelude to an anticipated great race season. Yet, the timeout due to COVID-19 prevented the original start of the series in April. Consequently, the Rotax MAX elite could not be more enthusiastic about the long-expected season opener. While the number of participants was limited by the local authorities, 136 drivers still made their way to Belgium and represented an international cross-section of around 20 nations.

In addition to the official RMC Euro trophy categories of Juniors, Seniors, DD2 and DD2 Masters, which not only compete for the series titles, but also for nine invitational tickets for the RMC Grand Finals, the Micro’s and Mini’s will be guests in 2020. There will be open races without a final classification for both categories, while the winners of each event will be rewarded with a ticket for the RMC International Trophy. The races on the 1,360-meter long circuit in Flanders were accordingly heated and the weather also put humans and material to the test: burning temperatures above 35 °C during the qualifying phase and rain on Sunday, made for an exciting mix…

Great Britain’s Scott Marsh (Dan Holland Racing) drove the very first best lap time during the Micro MAX debut in the RMC Euro Trophy. However, after the heats he had to hand over the top position to Max Sadurski (Energy). The Dutchman won all the heats and went into the final day as the clear favorite. Then, the change of weather on Sunday made it difficult for the youngster.

On the slippery track he only ended up in fourth and second place, which put him in second position overall in the day‘s standings. Meanwhile, his compatriot Mees Houben (GKS Lemmens Power) was in a class of his own. The Exprit driver was unbeatable in the wet and took the double victory. The podium was completed by Jake Menten (Evo) from the Netherlands.

Reno Fernon Francot (GKS Lemmens Power) set the tone for the Mini MAX at the start of the weekend. The Dutchman was fastest in qualifying and made a clean sweep in the heats. It wasn’t until the rain on Sunday that the tide turned and the favorite lost ground. On the other hand, his teammate Taym Saleh (GKS Lemmens Power) took the reins. In his first Mini race ever, the German boosted himself to victory on Sunday by gaining maximum points ahead of Slovenian Vidmar Aljaz (sport style AKK) and Dutchman Thijmen Houben (GKS Lemmens Power).

In the junior category, Kai Rillaerts (JJ Racing) was in brilliant shape from right from the go. The local hero from Belgium was fastest in qualifying and defended the lead after the heats. But in the first rainy final, William Macintyre (Sodi Vitesse) rocked the boat. Starting the race from sixth on the grid, he fought his way to the top and crossed the finish line with a clear gap. However, a disqualification followed shortly after the race, as the youngster from the UK had forgotten the mandatory weighing. In the end, Rillaerts inherited the race victory.

In the second final, Tim Gerhards (SP Motorsport) took the triumph. With a strong performance, he quickly took the lead which was never in danger until the chequered flag. Behind the Dutchman, Rillaerts had to admit defeat in P2, which nevertheless was enough for him to win the RMCET event by securing the most points out of both finals. Gerhards took second place on the podium in front of his compatriot Bruno Mulders (CRG).

Defending champion Mathilda Olsson (Strawberry Racing) was the benchmark as the weekend got underway. The Swede set the pace in the 51-driver field by leading the classification in qualifying and total ranking after the heats. Yet the champion could not tie in with her speed on the rainy final day and slipped back to fourth place in the official results.

Alternatively, Dylan Lahaye (GKS Lemmens Power) made his way up the order. The Belgian seized the home advantage and won both finals in a dominant manner. As a result, he climbed to the top of the podium, while Dutchman Storm Broer (SP Motorsport) and Mads Riis (Daems Racing Team) from Denmark completed the top three.

The DD2 class opened the weekend with a turbulent qualifying: almost half of the field ended up without a timed lap, as numerous drivers missed driving onto the track within the permitted time limit. Sebastian Janczewski (Tony Kart) was clearly unaffected by the situation. The Pole was the fastest in qualifying and remained undefeated – even after the heats. Only the rain on Sunday made for a change at the top.

Janczewski dropped back in both races and had to acknowledge the Austrian Manuel Tenschert (KSM Racing Team) and the Belgian Glenn van Parijs (Bouvin Power) as the final race winners. In the day’s standings, it was ultimately local hero van Parijs prevailing with the most points, followed by Tenschert. Third place went to Silas Rytter (RS Competiton), who originally won the first race, but dropped back to sixth due to several time penalties.

Christophe Adams (Sodi) set the benchmark in the DD2 Masters. On his home circuit, the Belgian was not only fastest in qualifying, but also won all of the heats. However, the experienced driver could not capitalize on the pole position on Sunday. On the wet track, he suffered a technical problem in the first final and ended up in seventh place.

Meik Wagner, organizer of the RMC Euro Trophy, drew a positive conclusion: “We experienced a really varied start to the season. The weather was extreme in all ways, which made the competition even more exciting. I would like to express great thanks to everyone involved in the exemplary adherence of our COVID-19 measures. The situation is difficult for everyone – we as series organizers are no exception if you look to the limited number of participants. However, it is in everyone’s interest that we can finally race again and I’m already looking forward to the next rounds now.”

The next stop of the Rotax MAX Challenge Euro Trophy will take place in Germany. The ProKart Raceland at Wackersdorf will host the halfway event from September 4 to 6, 2020. The Micro’s and Mini’s will skip the guest performance in Bavaria, making room for the DEKM eKart series, which will undoubtedly enrich the program of the innovative BRP-Rotax electric kart “Project E20”.