For four years, the Rotax MAX Challenge elite had to wait for the return of the Winter Cup event. From February 21st to 23rd, the prestigious format celebrated a remarkable comeback on the Campillos Circuit, near Malaga in Spain. Organized by Camp Company, the host of the successful Rotax MAX Challenge Euro Trophy, the Winter Cup welcomed exactly 200 drivers representing over 25 nations, confirming the high demand from competitors. 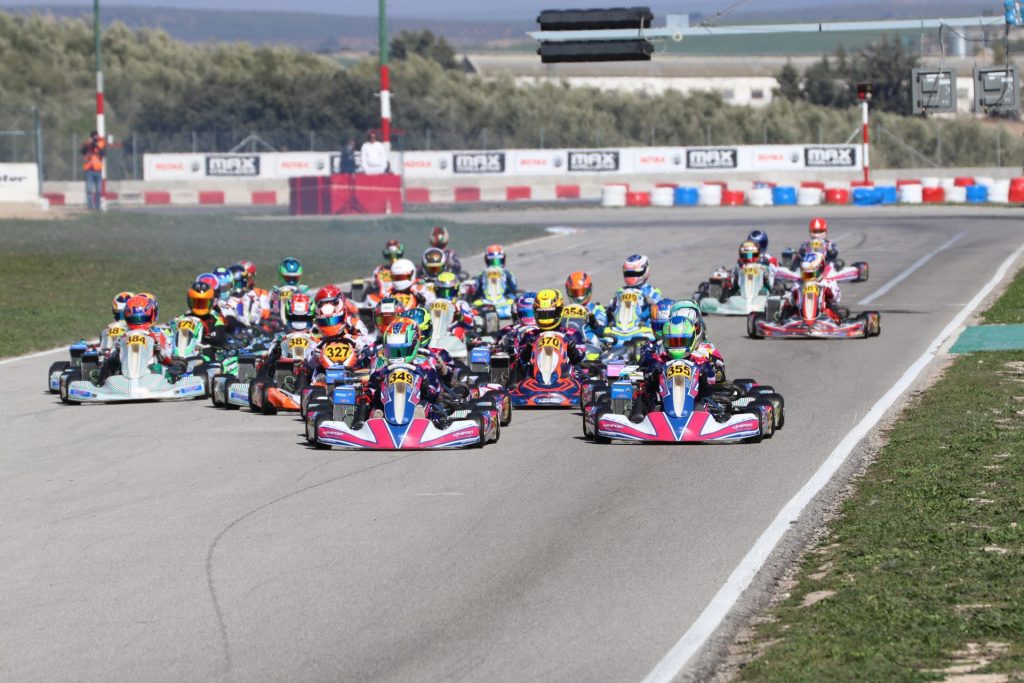 The modern karting complex of Campillos was a perfect venue for the season kick-off. A challenging 1,588 meter-long track with professional facilities. A sunny but windy weekend with temperatures of about 18° C guaranteed the best race conditions for the drivers heading for victory in the categories of Micro MAX, Junior MAX, Senior MAX, MAX DD2, and MAX DD2 Masters.

As for the competition, the event proved to be a real trial of strength between Europe’s most successful RMC drivers. Ambitions were high since the participants did not come to the Winter Cup just to prepare for the season but to also fight for special prizes. The best in each category was rewarded with a free season in the upcoming Rotax MAX Challenge Euro Trophy for a total prize basket worth of almost 35.000 euros.

For the first time, the Micro MAX was part of an RMC Euro Trophy event and welcomed 28 youngsters. They showcased pure racing action not less thrilling than their bigger and older colleagues. Two names set the pace throughout the weekend: the Brit Scott Marsh (Dan Holland Racing) and Mateja Radenkovic (Bouvin Power) from Belgium. In Qualifying, Marsh had the advantage but Radenkovic fought back after the heats. The battle continued until Sunday’s Finals where both shared the race victories. Eventually, it was Marsh who won the decisive second race, giving him the overall trophy ahead of Radenkovic. The prize for the best supporting role went to Dutchman Dean Hoogendoorm (KR) who completed the podium.

Oli Pylka (Dan Holland Racing) revealed himself as an outstanding youngster in the Junior field. He set the pace in Qualifying, the heats and – despite some big pressure – in the first Final. Just the second final did not go according to plan for the Polish driver as he dropped back several positions and struggled hard to get back to the top. Finally, he did not manage the task completely, crossing the finish line in second place behind Daniel Guinchard (KR Sport). In the combined results of both finals, Pylka still gained the most points and was crowned RMC Euro Trophy Winter Cup winner. Guinchard followed in second place ahead of the best rookie Aaron Walker (Strawberry Racing).

With 69 drivers, the Senior category was the biggest field at the RMC Euro Trophy Winter Cup. Yet one man stood out from the pack from the very beginning: Juho Valtanen (SP Motorsport). The Finn did not only set the best time in Qualifying but kept the overall lead after the heats. However, in Sunday’s first Final, the tide turned for the Scandinavian. He dropped back to fourth place while rookie Sean Butcher (KR Sport) won the race. Unfortunately, the Brit could not tie in with that performance in the second Final. Although he was fast again and even saw the chequered flag as the leader, he was given a time penalty after making a jump start following a full course yellow phase. Consequently, Juho Valtanen inherited the race win and claimed the overall victory. Butcher still ended up second, pushing his compatriot Lewis Gilbert (Potenza Racing Engines) to third place.

Xander Przybylak (Bouvin Power) was the man of the weekend in the Rotax MAX DD2 category. After setting the benchmark in Qualifying, he was in the best shape throughout the heats as well, putting himself on pole position for the initial final on Sunday. His opponents tried their best to stop him making it a walkover but eventually without success. Przybylak won both Finals, collected maximum points and asserted himself at the top of the day’s classification. Behind the new RMC Winter Cup winner, the Frenchman Nicolas Picot (Daems Racing) and MAX DD2 newcomer Silas Rytter (RS Competition) took second and third place on the podium.

The MAX DD2 Masters were under the control of Slawomir Muranksi (46Team) from the very beginning. The Pole was quickest in Qualifying and defended the lead after the heats. So it was no surprise that Muranski was unbeatable in the first Final before suffering from a setback in the decisive second Final. After 15 laps, he crossed the finish line in second position behind the Frenchman Rudy Champion (PKS Competition), narrowly losing the overall victory. Muranski’s French opponent had very good reasons to cheer and celebrate the win. Behind the two front runners, Germany’s Andreas Schindler (RS Competition) stepped onto the podium’s third place.

“The return of the popular RMC Winter event really made an impact,” Meik Wagner, organizer of the RMC Euro Trophy Winter Cup, stated after the race. “Never before has a European Winter Cup for Rotax drivers been as well-attended. We have lifted Rotax racing again by including the Micro MAX category for the first time within our framework. That enriched the entire program and made the event an even bigger success. It was a thrilling taste to the upcoming 2020 season of the Rotax MAX Challenge Euro Trophy, which we are looking forward to, and promises to be no less exciting.”

The RMC Euro Trophy kicks off at Genk, in Belgium, from April 10th to 14th, following meetings at Adria, Italy, PFI, UK, and Wackersdorf, Germany. Although there is still some time until the series’ opener, the Rotax fields are already filling. Besides Micro MAX, Junior MAX, Senior MAX, MAX DD2, and MAX DD2 Masters classes, the race organizer will introduce the Mini MAX class into the competition.