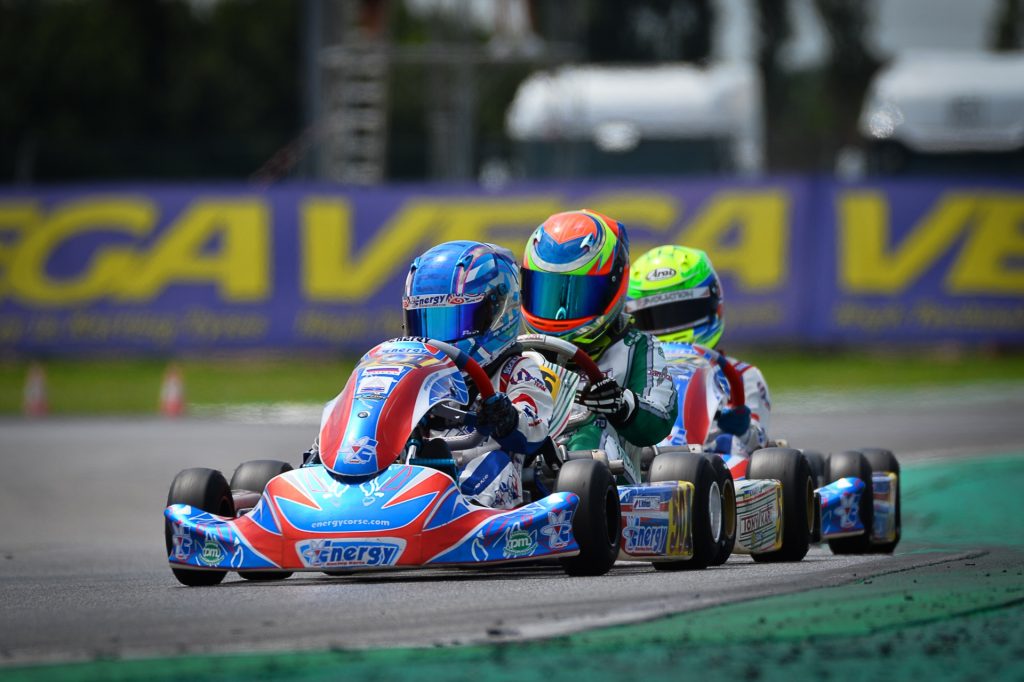 Already the fastest on Tuesday, Nikita Bedrin (Tony Kart/Vortex) made it two pole positions in a row in OK. The Russian driver was the only one lapping below the 48-second mark in the first series, which turned out to be enough to secure the timesheet’s top spot.

The opening heat (A-B) saw a battle between Bedrin and Camara until the former jumped ahead halfway through and built a solid gap until the finish. The Brit Oliver Gray (Birel ART/TM) took third place while Turney and Van’t Hoff recovered from the queue of the field to fifth and eight positions. After a long chase, Antonelli took victory from Cuman in the second race (C-D) with Luigi Coluccio (Kosmic/Vortex) in third.

Karol Pasiewicz (Tony Kart/Vortex) set the pace in qualifying with a best performance achieved in the second series. The Pole preceded Ugo Ugochukwu (KR/IAME), on top of the opening group, followed by Tymoteusz Kucharczyk (RK/TM), Arvid Lindblad (KR/IAME) and Maxwell Dodds (Parolin/TM). Brando Badoer (KR/IAME), polesitter for Round 3, was third-fastest of his series and sixth overall.

Kucharczyk produced a strong drive in the opening heat (C-E) against Dodds who could not keep his second place due to a penalty, promoting both Freddie Slater (Kosmic/Vortex) and Ean Eyckmans (Kosmic/Vortex). Ugochukwu was equally untouchable in the next confrontation (B-D) in front of Alfio Spina (KR/IAME) and Lindblad.

In today’s third heat (A-E), a close fight opposed polesitter Pasiewicz, Badoer and Dodds until the Pole lost ground down to fifth in the closing lap, allowing both Dodds and Harley Keeble (Tony Kart/Vortex) to sneak into first and second place ahead of Badoer and Igor Cepil (KR/IAME). In the last heat (C-D), Kucharczyk came close to double his tally before Lindblad made his move for the win. Alexander Gubenko (Kosmic/Vortex) recovered three positions up to third.

Dmitry Matveev (Energy Corse/TM), who performed well in the heats of Round 3, kept his momentum going against the clock with the fastest time achieved in the first series. Tiziano Monza (KR/TM) put himself first in the third group and second overall, ahead of his Team Driver Racing Kart teammate Clément Outran (KR/IAME). Aleksandar Bogunovic (Tony Kart/TM) followed in fourth with Griffin Peebles (Parolin/TM) in fifth.

Jan Przyrowsky (Parolin/TM) was the first heat winner of the day (C-E) in front of Rene Lammers (Parolin/TM) and Outran. Maciej Gladysz (Parolin/TM) emerged victorious from a tight explanation in the B-D race against Francesco Amendola (Energy Corse/TM) and James Egozi (Tony Kart/Vortex) while the poleman Monza had to retire in the penultimate lap.

Matveev made perfect use of his pole position in the third heat (A-E), ahead of Peebles and Mark Kastelic (KR/TM) who made up seven places, before Przyrowsky concluded his day on a winning note (C-D), beating again Lammers with Bogunovic in third.

Viktor Gustafsson (Birel ART/TM) remained unbeaten on one lap in the KZ2 class, putting together a performance in the second qualifying group faster than the previous reference from Danilo Albanese (KR/IAME). David De Marco (KR/IAME) followed in third with Paavo Tonteri (Tony Kart/Vortex) and Simo Puhakka (Tony Kart/Vortex) in fourth and fifth positions respectively. Matteo Vigano (Birel ART/TM), the KZ2 heat leader in Round 3, was fourth of the second group and seventh overall.

Gustafsson confirmed his improving pace in the opening heat (A-B) by leading from start to finish while resisting Puhakka’s constant pressure. The Finn eventually had to make do with second place ahead of Alex Irlando (Birel ART/TM). In the second race (C-D), Tonteri similarly drove to victory despite the threat from De Marco who also had to deal with a pressing Vigano.

Drivers will be back on track on Friday for the remaining Qualifying Heats of Round 4 of the WSK Super Master Series. Prefinals and Finals awarding the 2020 trophies of the competition organized by WSK Promotion will take place on Sunday, July 5th.