The Qualifying Heats of the Third Round of the WSK Super Master Series have delivered their verdict on Wednesday, July 1st, at the Adria Karting Raceway. Sunny and dry conditions allowed for exciting races in all four classes. In the end, Nikita Bedrin (OK), Brando Badoer (Junior), Dmitry Matveev (Mini 60) and Matteo Vigano (KZ2) topped the provisional standings ahead of the Prefinals and Finals scheduled on Saturday. 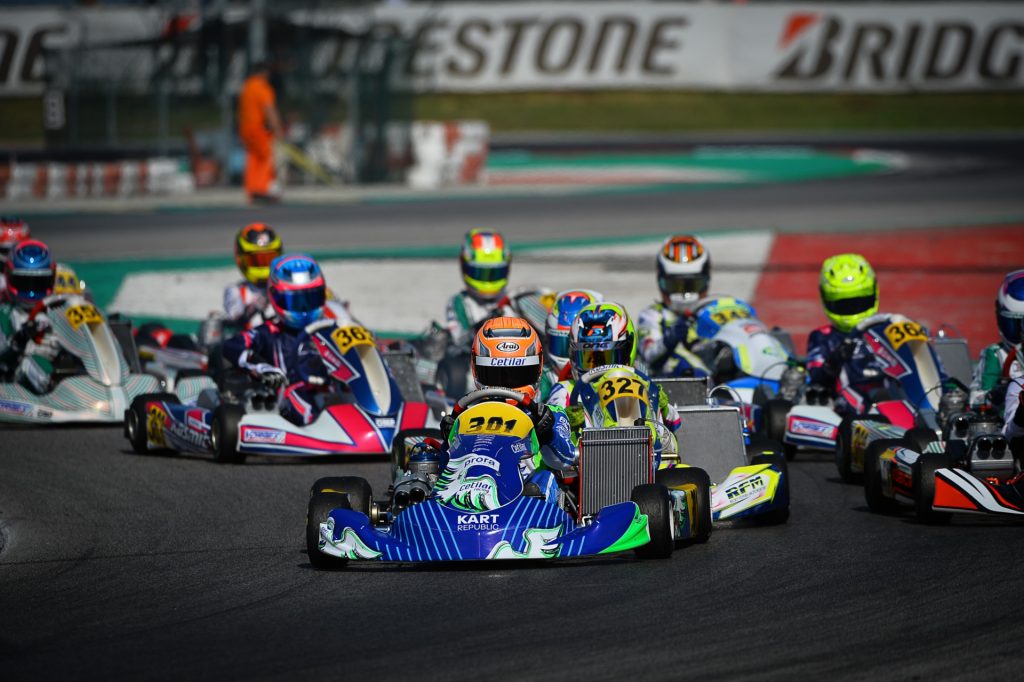 Nikita Bedrin (Tony Kart/Vortex) kept it under control through Wednesday’s qualifying races, adding two more wins to an already winning start yesterday. The young Russian leads the provisional OK classification ahead of Andrea Kimi Antonelli (KR/IAME), winner of two races. The Italian will start Saturday’s Prefinal B from pole while Bedrin will lead the pack on the Prefinal A’s grid.

Victorious of his opening heat on Tuesday, Rafael Camara (Exprit/TM) took a pair of third positions and classified overall third in front of Joe Turney (Tony Kart/Vortex). The Brit has not won yet this week but keeps himself in the leading wagon, along with his countryman Taylor Barnard (KR/IAME).

Already the fastest in Qualifying for the third WSK round in a row, Brando Badoer (KR/IAME) remained unbeaten in all of his four Qualifying Heats. Leader of the provisional standings, the Italian will align himself on pole position for Saturday’s Prefinal A.

Following on a first victory yesterday, the Pole Karol Pasiewicz (Tony Kart/Vortex) took his second heat win along with a pair of second places, earning him the provisional runner-up rank and the pole position for the Prefinal B. He’s followed in third place by his countryman Tymoteusz Kucharczyk (RK/TM), winner of one race.

After an encouraging start with a fourth-place result, Valerio Rinicella (Parolin/TM) cumulated a triplet of second positions to be classified overall fourth. Coskun Irfan (Kosmic/Vortex), in fifth place, precedes Arvid Lindblad (KR/IAME) whose strong form was hampered by retirement in his last heat, as well as for his Kart Republic teammate Ugo Ugochukwu (KR/IAME), classified seventh with one win.

The competition remained tight during Mini 60’s heats where different drivers distinguished themselves but the Russian Dmitry Matveev (Energy Corse/TM) eventually came to the fore thanks to three wins, earning him pole position for the Prefinal A. Griffin Peebles (Parolin/TM), who managed one victory along with a pair of second and a third place, is second overall (pole for Prefinal B) ahead of Rene Lammers who never finished outside of the Top 4 while coming close to the win.

Mark Kastelic (KR/TM) recovered from a lost second place, due to a front fairing penalty, with a win and a third place, giving him the fourth rank in the standings in front of the Belgian Lenn Nijs (KR/IAME). Despite two wins and a second place, Jan Przyrowsky (Parolin/TM) only classified seventh due to a less favorable result. Kean Nakamura Berta (KR/IAME) went through a similar misfortune in his penultimate heat race and only classified ninth despite three wins.

Matteo Vigano (Birel ART/TM) sits in the leading chair of the KZ2 class at the end of the heats with two wins added to an early second place. The Italian is set to start Saturday’s Prefinal A from pole, while his countryman Giuseppe Palomba (Birel ART/TM), second overall with a win, will do the same for Prefinal B.

Riccardo Longhi (Birel ART), third, concluded his run of heats on equal points with his teammate Palomba and precedes Simo Puhakka (Tony Kart/Vortex), winner of his opening race. Danilo Albanese (KR/IAME) is classified in fifth thanks to a string of third positions, followed by Viktor Gustafsson (Birel ART/TM) who converted his pole position into success in one occasion.

Check out the full provisional classifications in OK, Junior, Mini 60 and KZ2 ahead of the Prefinal and Finals of Round 3, scheduled on Saturday, July 4th.

Round 4 of the 2020 WSK Super Master Series begins on Thursday, July 2nd, with up to 186 drivers ready to start over with Qualifying and a new run of eliminatory races. Click here to follow all the action live from Adria!