The Third Round of the 2020 WSK Super Master Series got officially underway on Tuesday, June 30th, at the Adria Karting Raceway where Qualifying and the opening heat races started drawing an early hierarchy amongst competitors in OK, Junior, Mini 60 and KZ2. 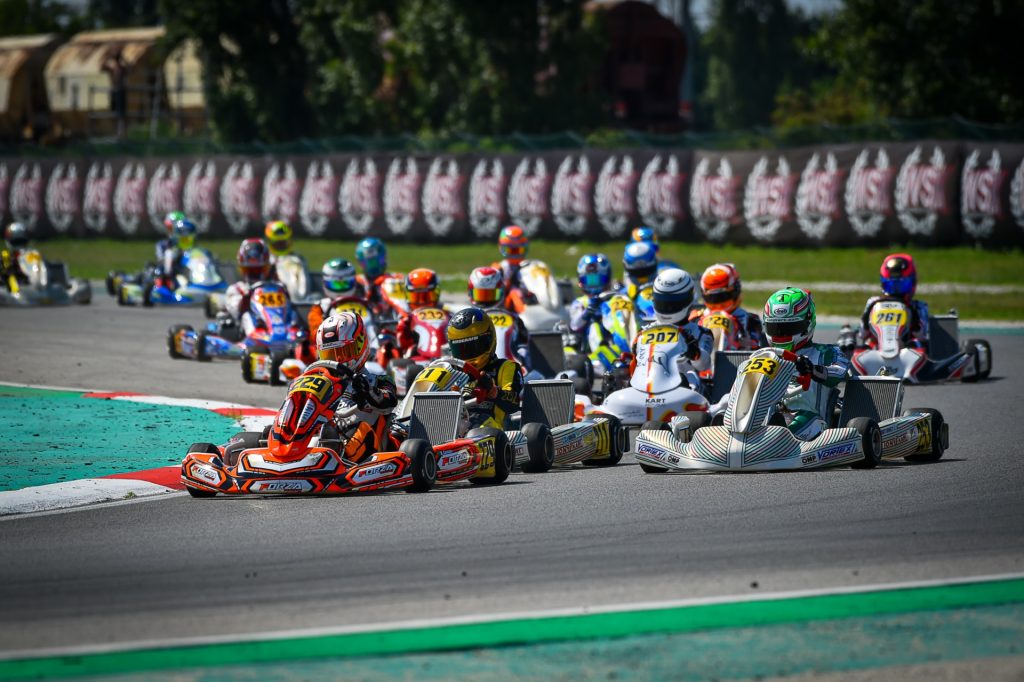 Nikita Bedrin (Tony Kart/Vortex) set the pace in the OK field on Tuesday morning. The quickest on one lap in the first qualifying series, the young Russian inherited the overall pole position ahead of Andrea Kimi Antonelli (KR/IAME) who missed the top spot for two tenths of a second in series n°2. Joe Turney (Tony Kart/Vortex), currently leading the OK standings, was third-fastest overall ahead of the Italian Nicolo’ Cuman (Parolin/IAME) and Taylor Barnard (KR/IAME).

Coming to the opening Qualifying Heats, Bedrin made good use of his pole position and led his first race of the week (A-B) from start to chequered flag. Antonelli crossed the finish line in second place, preceding Barnard, Luigi Coluccio (Kosmic/Vortex) and Charlie Wurz (Exprit/Vortex).

The first of four Qualifying Heats scheduled on Tuesday went to Lindblad (C-E) who pulled away from the opposition led by Kucharczyk, second ahead of Coskun Irfan (Kosmic/Vortex), author of a four-place recovery. The Pole Karol Pasiewicz (Tony Kart/Vortex) took victory in the B-D race for a tiny gap (0.176 seconds) in front of Ugochukwu while Rafael Modonese (Birel ART/TM) completed the Top 3.

In the third eliminatory race (A-E), Badoer built a comfortable lead ahead of Harley Keeble (Tony Kart/Vortex) and Kucharczyk while Lindblad took his second success in the last race (C-D). Rinicella crossed the line in second place ahead of the Brit Sonny Smith (KR/IAME).

Jan Przyrowsky (Parolin/TM) was the fastest of all in the Mini 60 Qualifying Practice with a best lap achieved in the second of three series. David Bottaro (Parolin/TM), his teammate at AVracing, took the second-fastest performance (first in Group 1) ahead of Nando Weixelbaumer (Parolin/TM), on top of the Group 3, Dmitry Matveev (Energy Corse/TM) and Lenn Nijs (KR/IAME).

The first Qualifying Heat (C-E) saw a strong effort from Kean Nakamura Berta (KR/IAME) who drove from fourth to first place while keeping a pressuring Nijs behind his back, followed by Guillaume Bouzar (Parolin/TM).

Matveev started his quest for points on the right foot with a victory in the second heat (B-D) ahead of Griffin Peebles (Pariolin/TM) and Antonio Apicella (Energy Corse/IAME). Matveev will be aiming this week to close the gap on Gerasim Skulanov (IPK/TM) who is not in Adria to defend his lead in the provisional standings, as well as other contenders for the win like Anatoly Khavalkin (Parolin/TM) and Rashid Al Dhaheri (Parolin/TM).

Przyrowsky turned his pole position into success in the third heat (A-E) against Mark Kastelic (KR/TM) and Rene Lammers (Parolin/TM), imitated in the fourth race (C-D) by Nakamura Berta, who already has two heats in the pocket, in front of Weixelbaumer and Apicella.

Viktor Gustafsson (Birel ART/TM) put himself ahead of the KZ2 class in Qualifying with the fastest lap of the two series combined. His teammate Matteo Vigano (Birel ART/TM) completed the 1-2 for the Leclerc by Lennox Racing Team. The Birel ART factory drivers Giuseppe Palomba and Riccardo Longhi (both on Birel ART/TM) followed in third and fourth, ahead of Danilo Albanese (KR/IAME).

The Finn Simo Puhakka (Tony Kart/Vortex) climbed from fourth to first position in the opening heat (A-B) where Vigano and Albanese respectively kept the second and third ranks thorough the race. Polesitter Gustafsson managed to partially recover from sixth up to fourth after a poor start, followed in fifth position by Leonardo Bizzotto (Formula K/TM).

Palomba, the provisional standings leader, achieved his first win as well by leading from the opening lap to the finish in the second heat (C-D). Lorenzo Camplese (Tony Kart/Vortex) kept him under pressure but had to make do with second place, followed by Longhi, Paolo Ippolito (CRG/TM) and Stan Pex (KR/TM).

Our Preview (with entries, classes, standings and more) is available here.