The 362 drivers entered in the Second Round of the 2020 WSK Super Master Series battled hard on track in their respective Qualifying Heats, this Saturday at South Garda Karting. While Giacomo Pollini (KZ2) and Andrea Kimi Antonelli (OK) established themselves as leaders, Brando Badoer (OKJ) and Dmitry Matveev (Mini 60) are yet to confirm their advantage before the closing races on Sunday morning, leading to the weekend’s main events. 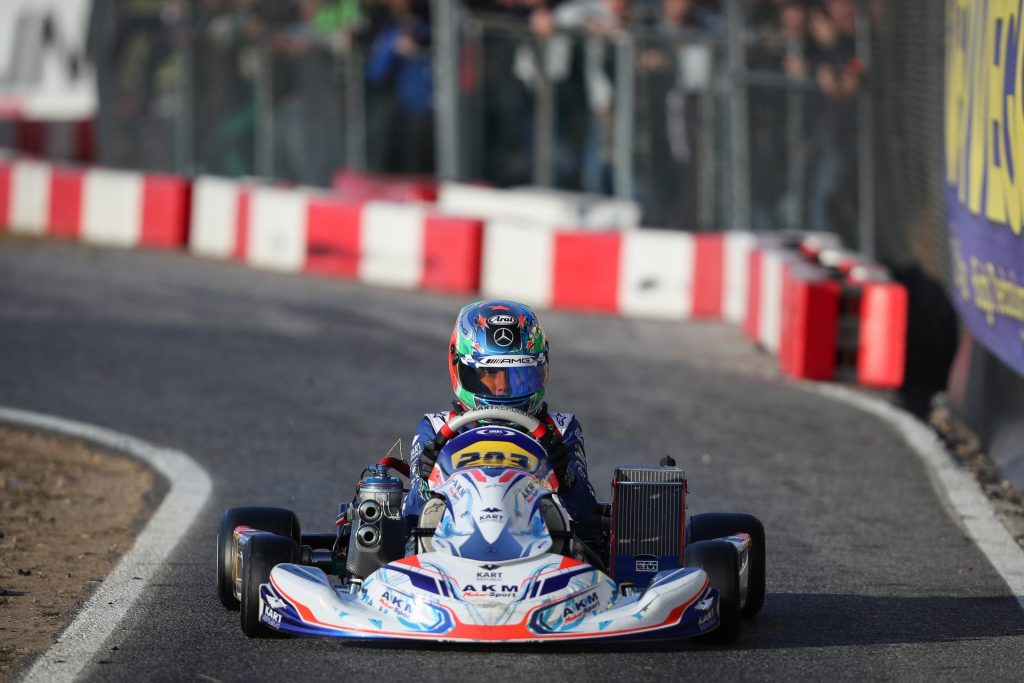 Andrea Kimi Antonelli (KR/IAME) concluded his Saturday on the highest step of the OK classification. Winner of his opening heat on Friday, the young Italian added two more successes and a second place to his tally, earning “little enough” points to start tomorrow’s Prefinal A from pole position. His closest rival in the ranking is Taylor Barnard (KR/IAME) who greatly recovered from a sixth-place finish yesterday by topping his next three races. The Brit will lead the grid in Prefinal B.

Third overall is Pedro Hiltbrand (Tony Kart/Vortex). The Spanish driver showed consistency with three second-place results, added to his early win on Friday. He’s closely followed by his teammate Joe Turney (Tony Kart/Vortex) who took one victory along with a pair of second positions. Sunday should see an interesting battle between KR and Tony Kart chassis upfront both Prefinals’ grids, which could also involve the polesitter Enzo Trulli (KR/IAME), fifth overall despite one less happy result in his last heat.

Brando Badoer (KR/IAME) remains unbeaten so far on top of the OK-Junior class. Polesitter, winner of his first heat, the son of former F1 driver Luca Badoer kept his momentum going on Saturday with three more wins, earning him the provisional leading spot. The Brit Arvid Lindblad (KR/IAME) follows within a short distance with three heat wins and a second place.

In third position is the Pole Tymoteusz Kucharczyk (RK/TM) with a win and three second-place finishes. Igor Cepil (KR/IAME) crossed the line of his last two races in third place which, added to a previous win and a second position, currently gives him the fourth place in the standings, ahead of Martinius Stenshorne (KR/IAME). Christian Ho (KR/IAME), 13th, managed one win as well as Akshay Bohra (KR/IAME), 22nd.

The definitive point classification in OK-Junior will be determined on Sunday morning, from 10:00 am (see below), as all the drivers still have one last race on schedule.

Giacomo Pollini (Formula K/TM) took the leading seat of the shifter class, this Saturday at Lonato. The Italian claimed two more heats to make it three in a row before concluding his day with a third place, enough to secure the pole position for Sunday’s Prefinal A. Alessandro Irlando (Birel ART/TM) comes in second position (pole for Prefinal B) with a pair of wins and second places, ahead of Fabian Federer (Maranello/TM) who managed two Top Three-results and a victory. Classified fourth, Jérémy Iglésias (Formula K/TM) recovered well from his 13th time in Qualifying with three third place-finishes and a second, followed by Giuseppe Palomba (Birel ART/TM).

Second-fastest in Qualifying, Ricciardo Longhi (Birel ART/TM) showed again some great pace with two heat victories before a slippery tarmac in his last race made him lose precious ground. The Italian wasn’t the only driver to be trapped in the closing KZ2 heat of the day where a sudden grip change midway through the race was very costly to many contenders, either forced to retire or classified in the backend of the field. A late turn of event that eventually worked out well for Viktor Gustaffson (Birel ART/TM).

Twice victorious on Friday, Dmitry Matveev (Energy Corse/TM) extended his tally today with a third success along with a second place, making him the provisional Mini 60 leader with one heat to go, from 11:00 am on Sunday. Having won three heats just like his countryman, the Russian Gerasim Skulanov (IPK/TM) follows in second position for a single point due to a third place-result in his last heat of the day.

German Foteev (Energy Corse/TM), provisional third, completes the Russian domination over the class so far with two wins as best personal results. The quickest on Friday’s timesheets, Mark Kastelic (KR/TM) could not turn his pace into first place-finishes yet but keeps himself within close range from his rivals. The French Jimmy Hélias (Tony Kart/Vortex) took another second position to close the current Top Five.

As for the Juniors, the definitive point classification in Mini 60 will be determined on Sunday morning, from 10:00 am (see below), as all the drivers still have one last race on schedule.

Check out the complete heat classifications in OK and KZ2.