The WSK Super Master Series is back on track this weekend at South Garda Karting for its Second Round of 2020 attended by a record-breaking number of 370 drivers spread over four classes: OK, OK-Junior, Mini 60 and KZ2 joining the WSK calendar for the first time. Check out our guide below ahead of the competition’s start with Qualifying and the opening heats on Friday. 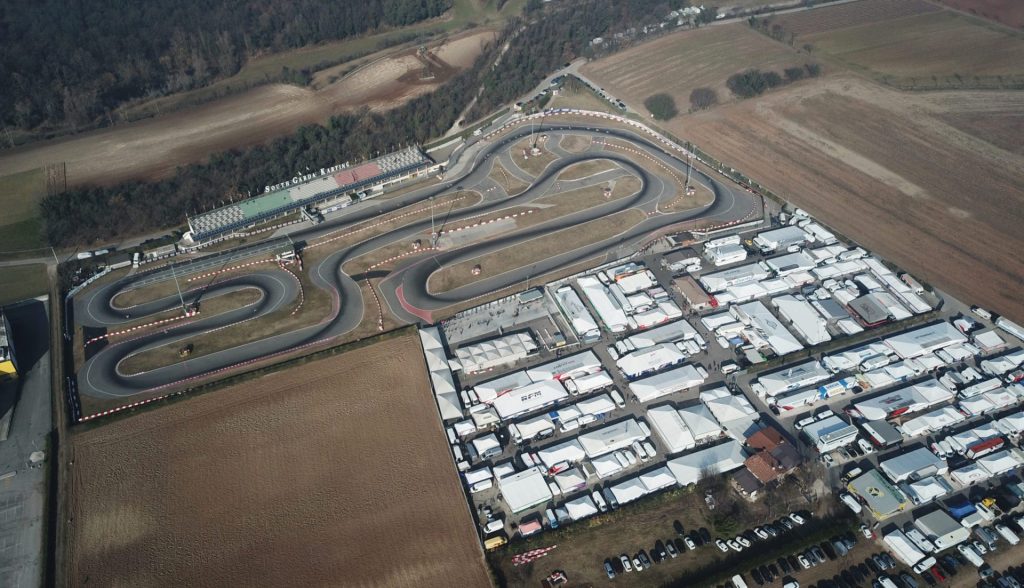 Less than three weeks after its thrilling opener at Adria, the WSK Super Master Series continues this weekend with its second race meeting of the year at South Garda Karting in Lonato. From February 20th to 23rd, 370 registered drivers will keep the Italian track busy from Free Practice this Thursday all the way to Sunday’s Finals.

South Garda, nicknamed “the Temple of Karting”, is one of the most celebrated karting tracks in the world. Surrounded by some of the biggest factories in the business, the track has been hosting many international competitions since its foundation back in 1988, such as the Winter Cup, ROK Cup Superfinal, WSK Series, rounds of the FIA Karting European Championship or the World Championship itself, the most recent case in last September.

Made of 14 corners spread over 1200 meters, South Garda has been specifically designed to deliver strong emotions not only to drivers but also to fans who can gather around the layout as well as in the main grandstand to watch the action up close.

The KZ2 class joins the WSK Series for the first time this year, one week after making its international debut at the Lonato Winter Cup. Birel ART certainly didn’t miss its season start by securing the 1-2 in Final with Giuseppe Palomba (Birel ART/TM) and Riccardo Longhi (Birel ART/TM) while Alex Irlando (Birel ART/TM) clinched fourth place.

Many will remember the OK Final of Adria where victory slipped from one Tony Kart driver’s hands to another when Joe Turney (Tony Kart/Vortex), who had led most of the race, was pushed out by a charging Kirill Smal (Energy Corse/TM), offering the win to his teammate Pedro Hiltbrand (Tony Kart/Vortex).

The Spaniard is the current leader of the provisional standings with 61 points in front of Turney, 49, and the Brit Taylor Barnard (KR/IAME) at 43. Smal follows within short distance (39) ahead of James Wharton (Parolin/TM) and Dilano Van’t Hof (Exprit/TM), on the podium in Adria. Down in eight, Harry Thompson (KR/IAME) is not to be taken lightly after showing some great intentions with the Sauber Karting Team.

Winner of both the Champions Cup and the opener of the WSK Super Master Series, Alfio Spina (KR/IAME) is the “man of the moment” in the OK-Junior class. The Italian put himself on top of the ranking (88 points), thanks to a double win in Prefinal and Final, ahead of the Pole Karol Pasiewicz (Tony Kart/Vortex), claimer of his Prefinal in Adria (54), and the American Ugo Ugochukwu (Kosmic/Vortex), second to Spina in Adria (44). The Brit Arvid Lindblad (KR/IAME), leader after the heats in Adria, and the Singaporean Christian Ho (KR/IAME), third of the opening round, are respectively fourth and fifth at 39 and 35 points.

The classification in Mini 60 is compact, led by the two Russians Gerasim Skulanov (IPK/TM), who won Adria’s Final, and Anatoly Khavalkin (Parolin/TM), second at the flag and only nine points short from the leader. The Japanese Berta Kean Nakamura (KR/IAME) in a distant third as he won the Prefinal but had to retire in the last race. Equal on points in fourth position come the French Jimmy Helias (Tony Kart/Vortex), third in Adria, and the Russian German Foteev (Energy/TM), both with 30 points.

Tune in on The RaceBox live page from Friday 08:20 am to follow the opening Free Practice sessions, followed by Qualifying and the first heat races. Reports and the latest results will be published at the end of each day.