One week after his successful season debut at the WSK Champions Cup, Alfio Spina (Kart Republic) remained unbeaten on the Adria Karting Raceway, this time in the opening round of the WSK Super Master Series where he claimed Sunday’s OK-Junior Final in front of Ugo Ugochukwu (Ricky Flynn Motorsport) and Christian Ho (Sauber Karting Team). 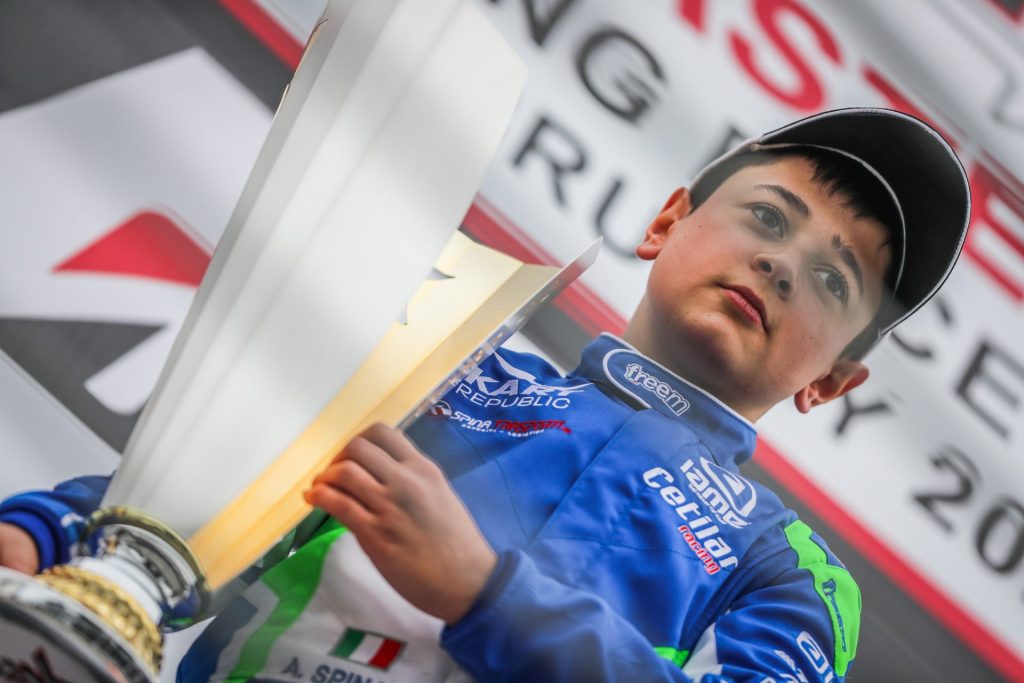 One week after his winning season debut at the WSK Champions Cup, Alfio Spina (Kart Republic, KR/IAME) took another win in Adria at the opening round of the WSK Super Master Series (© Alex Vernardis).

The OK-Junior Final, which triggered Adria’s racing festivities on Sunday afternoon, crowned for the second week running the Italian Alfio Spina (KR/IAME) following his triumph in the WSK Champions Cup.

Qualified on pole position thanks to his earlier win in the Prefinal B, Karol Pasiewicz (Tony Kart/Vortex) kept his advantage at the start and throughout the race’s early stages despite Ugo Ugochukwu (Kosmic/Vortex) climbing from sixth to second. Spina, despite starting from the grid’s front row, had a hard time containing his rivals and fell down to fifth position until the race was put into ‘Full Course Yellow’ from Lap five to eight due to an incident involving two drivers further down the order.

Spina made strong use of the re-start and, while the field was put back together, went past Artem Severiukhin (Tony Kart/Vortex) and Paciewicz up to third place before surprising both Ugochukwu and Lindblad for the lead on lap 11. From then on, the Kart Republic driver pulled away from his pursuers to secure his second OKJ victory in two weeks’ time on the Adria Karting Raceway.

Second on the finish line, Lindblad was eventually classified in seventh position due to a penalty, which promoted both Ugochukwu and Christian Ho (KR/IAME) one rank further. Pasiewicz and Martinius Stenshorne (KR/IAME) completed the Top Five.

Alfio Spina is the first leader in the OK-Junior classification with 88 points in front of Karol Pasiewicz, 54, and Ugo Ugochukwu, 44. The Second Round of the WSK Super Master Series will unfold from February 20th to 23rd at the South Garda Karting of Lonato. Check out The RaceBox for daily results, reports, and live page.