The 2020 WSK Super Master Series got off to an exciting start in the OK category in the form of a 20 lap-battle in Final between some of the best karting drivers in Europe, this Sunday on the Adria Karting Raceway. If Joe Turney led most of the race, it was his teammate Pedro Hiltbrand who offered Tony Kart its season’s first victory in front of Taylor Barnard (Rosberg Racing Academy) and Dilano Van’t Hoff (Forza Racing). 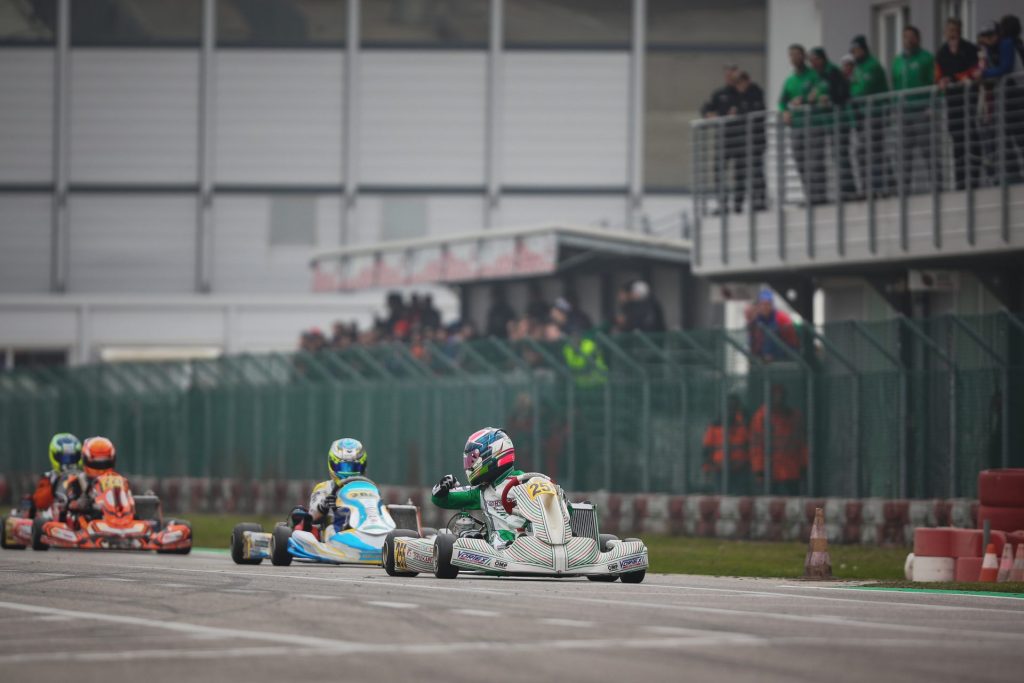 As for the season opening’s WSK Champions Cup, heavy clouds, fog, and temperatures below 10°C welcomed the 34 drivers qualified for the OK Final in the first meeting of the WSK Super Master Series. After dominating the morning’s Prefinal B, Joe Turney (Tony Kart/Vortex) started from pole position alongside James Wharton (Parolin/TM), claimer of the Prefinal A.

The British driver led the field through the opening lap ahead of Pedro Hiltbrand (Tony Kart/Vortex) climbing from the grid’s third row to join his Tony Kart teammate at the front. While Wharton quickly fell down the order, Turney, Hiltbrand and Thomas Ten Brinke (Kosmic/Vortex) isolated themselves from the rest of a pack led by Harry Thompson (KR/IAME) in the early stages.

The Sauber Karting Team driver made the connection with the leading trio on Lap 6, overtaking both Hiltbrand and Ten Brinke before increasing pressure on Turney. The two started fighting for the lead, which enabled Kirill Smal (Energy Corse/TM) to close the gap with Dilano Van’t Hoff (Exprit/TM) on his tail. Eventually, the Russian climbed to second and even took the lead from Turney until less than three laps from the chequered flag when a collision sent them both off track!

With the two leaders unexpectedly out of contention for the podium, Hiltbrand was promoted to first place and kept his rivals at bay until crossing the finish line ahead of Taylor Barnard (KR/IAME), recovering from ninth on the grid, and Van’t Hoff completing the podium. Fifth on track in front Turney, Smal was classified seventh due to a post-race front fairing penalty as a result of the contact with the Brit, just like Clayton Ravenscroft (Birel/TM) who went from eighth to 15th.

“It’s been a crazy Final. I’m sad for Joe [Turney], my teammate. He was doing a good weekend and good Final but got pushed and, in the end, I win. I want to say ‘thank you’ to Tony Kart again for the hard work they’ve done and the trust they put into me. Thanks to all of them and to Vortex engines,” declared Hiltbrand on the podium, two months after his last victory at the WSK Final Cup on the same Adria Karting Raceway.

In the provisional point standings of the OK class, Pedro Hiltbrand logically leads with 61 points in front of his teammate Joe Turney, 49, and Taylor Barnard at 43. The Second Round of the WSK Super Master Series will unfold from February 20th to 23rd at the South Garda Karting of Lonato. Check out The RaceBox for daily results, reports, and live page.