Joseph Turney achieved a memorable OK victory in the 25th Winter Cup ahead of Lorenzo Travisanutto making it a 1-2 for the Tony Kart Racing Team, last weekend at South Garda Karting where the Italian Factory Team fought amongst the main protagonists. 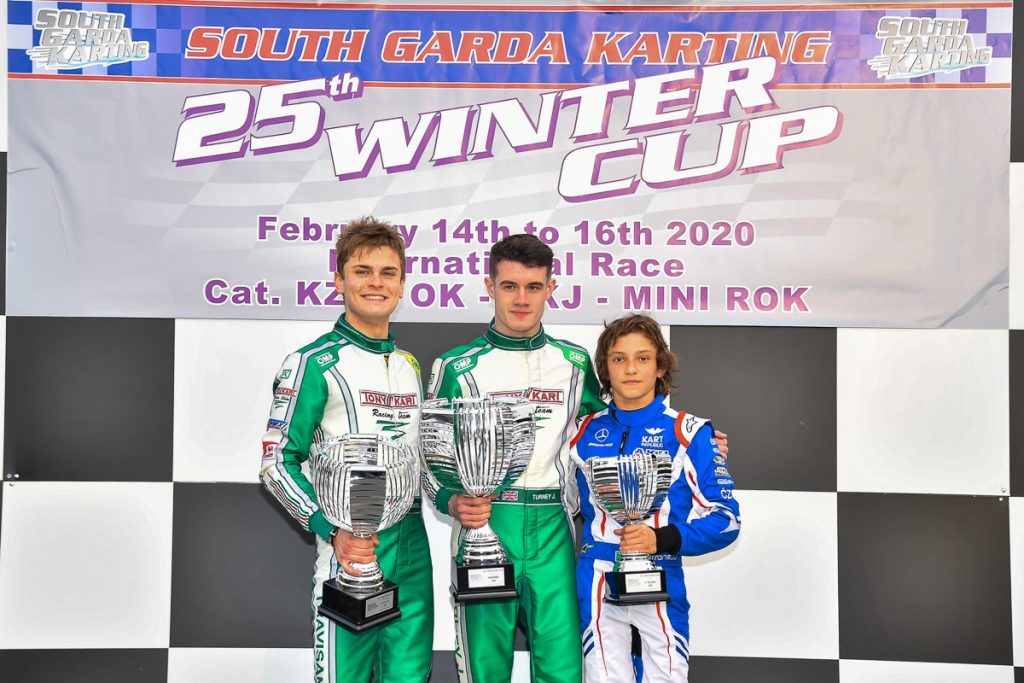 Both drivers led most of the final race of the OK class at the wheel of their Tony Kart Racer 401 R chassis powered by Vortex. The current World Champion Travisanutto remained up front in the opening laps after taking Pole Position thanks to two victories in the Qualifying Heats.

Turney greatly recovered from 11th on the grid to take the first spot from his teammate eight laps from the chequered flag. The Brit made up well for an unlucky retirement during his heats with two victories, a second place and a victory in the Super Heat 2.

Pedro Hiltbrand once again delivered a strong performance, damaged by a penalty at the end of the Final which denied the Spaniard a fifth-position finish after recovering 13 places. He was eventually classified ninth. Diego Contecha also had a good weekend, improving from his starting position in the decisive race after running a great Qualifying and finishing twice in the Top Ten.

In KZ2, Simo Puhakka started the competition the best way possible by clinching Pole position followed by two victories and two second places on Friday and Saturday. A bit of bad luck during the Super Heat compromised a top-level weekend concluded with a sixth place in the Final.

Paul Evrard managed to improve from his starting position and closed well his debut weekend with Tony Kart, staying in the Top Ten in all of his Heats. Alessio Piccini proved again to be among the most fighting drivers of the field by recovering 23 positions in the Qualifying Heats.

Karol Pasiewicz crossed the OK-Junior Final’s finish line in second position. Technical checks in the Parc Fermé, however, assigned several penalties, vanishing the excellent result of the Pole and withdrew Harley Keeble and Aiden Neate. For his debut with the Italian team, Bruno Del Pino finished just outside the Top Ten after gaining four places in the first ten positions during the Heats and the Super Heats. Maxim Rehm, unluckily, was forced to retire again, missing the chance to show off his true potential. Eron Rexhepi couldn’t take part in this year’s Winter Cup due to injury.

The Tony Kart Racing Team will be back to business as early as this weekend for the second meeting of the WSK Super Master Series, taking place again at South Garda Karting. Four categories will be on track: KZ2, OK, OK-Junior and Mini 60.