The Second Round of the 2020 WSK Super Master Series officially started on Friday at South Garda Karting where 372 drivers hit the track for their respective Qualifying sessions, followed by 18 heat races. Alex Irlando (KZ2), Enzo Trulli (OK), Brando Badoer (OK-Junior), Mark Kastelic and Gerasim Skulanov (both in Mini 60) emerged as early leaders before the continuation of the heats on Saturday under Lonato’s sunshine. 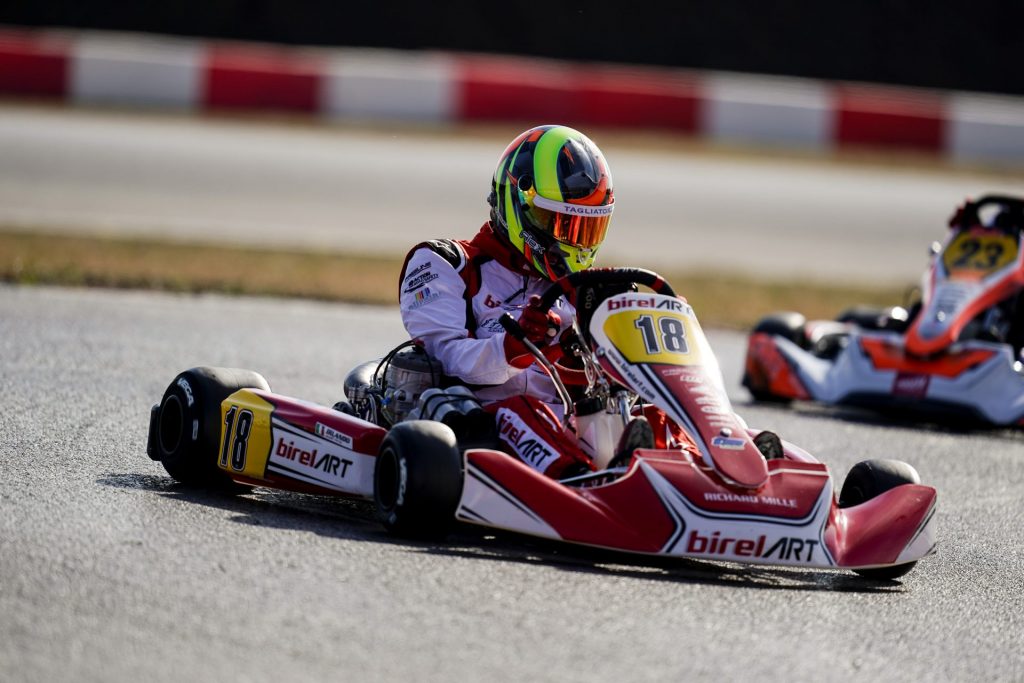 Alessandro Irlando (Birel ART)/TM) got his first appearance in this year’s WSK Super Master Series off to a strong start by taking pole position in the KZ2 class on Friday morning. The Italian was the fastest in the opening series ahead of his teammate Riccardo Longhi (Birel ART/TM) and Douglas Lundberg (Lenzokart/TM). Giacomo Pollini (Formula K/TM) secured the fourth place ahead of Matthew Payne (Birel ART/TM).

Two heats were on schedule for the shifter category filled with 77 drivers. Lundberg kept his advantage in the opening race (C-E) in front of Giuseppe Palomba (Birel ART/TM) and Jérémy Iglésias (Formula K/TM) after an early tussle between Payne and Adrien Renaudin (Sodikart/TM) led to their retirement after the start. The second confrontation smiled upon Pollini who denied Longhi the win ahead of Simo Puhakka (Tony Kart/Vortex).

Later on, the overall polesitter Trulli converted his Qualifying performance into success (A-E) against Hiltbrand and Travisanutto, both securing their second top three-finish. Eventually, Theo Wernesson (Kosmic/TM) claimed the fourth and last qualifying race (C-D) for a short distance ahead of Van’t Hoff and Camara.

The Junior drivers, along with the Minis, were the busiest of the day racing-wise with six heats. Badoer secured an early victory (A-B) in front of Cepiln Matheus Ferreira (KR/IAME) and Alfio Spina (KR/IAME), winner of the opening round at Adria. Lindblad dominated the next heat (C-D) against Douwe Dedecker (KR/IAMe) and Bohra, both promoted one rank after Cristian Bertuca (Birel ART/TM) was penalized (front fairing).

The E vs. F race was clinched by Martinius Stenshorne (KR/IAME) in front of Kucharczyk and Pasiewicz, while Badoer added another win (A-C) to his Friday’s tally by preceding Lindblad and a recovering Freddie Slater (Kosmic/Vortex). The last two Qualifying Heats of the day went to Kucharczyk (D-F), ahead of Bertuca and Tuukka Taponen (Redspeed/IAME), and Cepil (B-E) who had the upper hand over Ugo Ugochukwu (Kosmic/Vortex), climbing from seventh on the grid, and Spina.

Next Qualifying Heat for the OK-Junior class: Saturday at 10:20 am (A-D)

Dmitry Matveev (Energy Corse/TM), one of the eye-catching performers in the class since the season kicked off, took the opening heat (A-B) for himself, ahead of Kastelic and German Foteev (Energy Corse/TM). In the next race (C-D), Rashid Al Dhaheri (Parolin/TM) recovered from a more difficult Qualifying up to first position, followed by Kean Berta Nakamura (KR/IAME) and Apicella.

Gerasim Skulanov (IPK/TM), victorious at Adria’s opener, won the following heat (E-F) in front of Egozi and Zhang, imitated in the A-C race by Matveev claiming his second success as he defeated Maciej Gladysz (Parolin/TM) and Anatoly Khavalkin (Parolin/TM). The penultimate heat (D-F) saw the victory achieved by Przyrowsky ahead of Enzo Tarnvanichkul (Energy Corse/TM) and Yaroslav Trukhin (Energy Corse/TM), while the closing race of Friday went to Skulanov, twice on top, followed by Jimmy Hélias (Tony Kart/Vortex), producing his effort from eighth, and René Lammers (Parolin/TM).