VDK Racing competed last weekend in the last round of the IAME Series Benelux held on the Karting des Fagnes Circuit of Mariembourg where their eight drivers delivered strong performances in Senior and Junior classes, highlighted by Corentin Collignon’s Vice-Champion title! 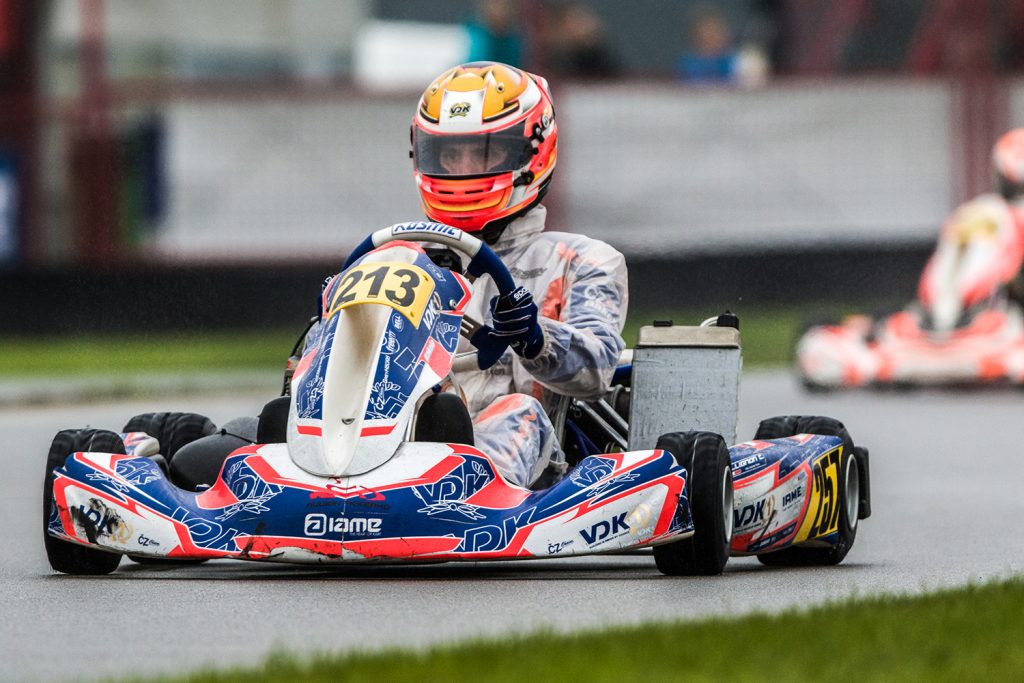 The 2019 season is slowly getting to its conclusion for VDK Racing. Following two busy months of September and October with the FIA Karting World Championship – OK/Junior, the IAME International Final and more recent participation in the WSK Open Cup at Lonato, the Verdaasdonk family’s team came back to his Belgian roots last weekend. Eight drivers were entered in the fifth and last meeting of the IAME Series Benelux run on the International Karting Raceway of Mariembourg.

True to its reputation in the autumnal period, the local weather came spicing up the competition, especially on Friday when rain flooded the track during Free Practice Sessions. If Saturday was dryer for Qualifying and the opening heats, rain tires were put to good use again on Sunday on a track made slippery by light but multiple showers.

In the Senior category, the VDK drivers set the pace in the qualifying series. Elie Goldstein took the second-fastest lap time of his group, meaning he would start his Qualifying Heats from the front row of the grid. The Ostricourt winner, determined to fight for glory, made a good start in his first race before being pushed into a spin by another driver in the first meters! Quickly back on his wheels, Elie recovered through the field and confirmed his race pace with two four-place finishes in his next heats.

Corentin Collignon, also at ease against the clock (fourth in the first series), showed good consistency by reaching the top 5 in all of his heats. Xavier Dias, fifth-fastest in his qualifying group, finished twice in the upper part of the field including a third place. Bastien Cochet also made good use of his pace by recovering a number of positions into the top 10 like Tom Uzan, not always served by luck but qualified among the 34 best seniors along with his teammates.

Originally scheduled on Sunday shortly after 15:00, the X30 Senior Final was eventually canceled following a decision from the Race Officials and the Promoter IAME Belgium due to circumstances outside of our control. VDK Racing supports this decision. As the season classification was made official based on nine events instead of ten (minus the two worst results in heats and Finals), Corentin Collignon was classified Vice-Champion of the IAME Series Benelux!

Three drivers defended the team’s colors in the Junior field (12-15 years old). Among the fastest of their respective qualifying groups, Olivan Fayt, Hugo Besson and the young Brazilian Antonio Leite, for his first appearance with VDK, made good progress in each session on their way to the Final where they saw the Checkered flag in the middle of a sometimes restless pack and in often difficult track conditions.

“It wasn’t an easy race with the track conditions but all of our drivers pulled their socks up and worked well, the performance was there all weekend,” says Eric Verdaasdonk, Team Manager of VDK Racing. “In Senior, we tried everything but some drivers felt a little more comfortable in the wet. Finishing second in the standings wasn’t our intention but it’s still a nice result for Corentin! The circumstances were rather exceptional but rules are made to be respected and the race organization had to take certain decisions which we fully support. Bravo also to Joey Van Splunteren for his title!”

With the IAME Series Benelux now concluded, VDK Racing is already looking towards Italy and the last two meetings of the WSK season with the Open Cup’s closing round at Castelletto di Branduzzo from 8 to 10 November followed by the Final Cup run by night on the Adria Karting Raceway from 22 to 24 November.