Saturday 15th May was a day filled with the majority of the Qualifying Heats of the 2021 FIA Karting European Championship – OK and Junior, and was marked by very changeable weather conditions. The circuit of Genk was indeed the plaything of an unusually capricious weather situation and the forecast became very random. However Arvid Lindblad in OK and Ean Eyckmans in OK-Junior were convincingly prominent. 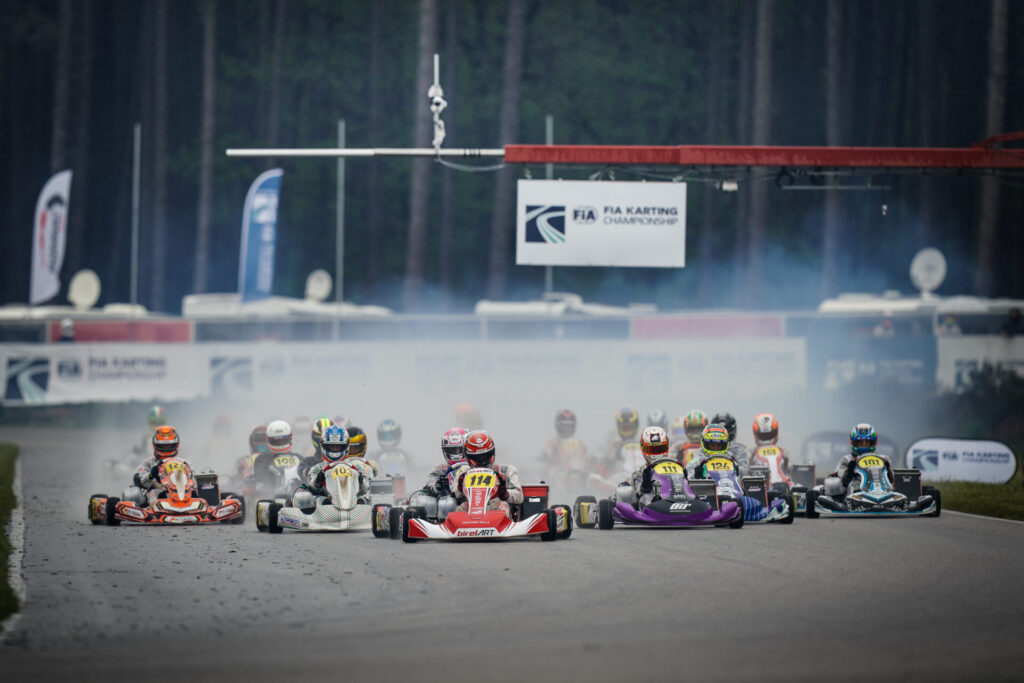 Most of the twenty races on the programme were disrupted by changes in grip, both at the start and during the laps. The skies were constantly changing with heavy clouds and then clearing at a rapid pace with short showers and sunny spells, sometimes even during a single lap. The choice of tyres, tyre pressures and tyre settings became a real headache for the technicians, sometimes a gamble. At the same time, the drivers’ composure was put to the test, while the spectators online enjoyed a breathtaking spectacle.

The wear of the rain tyres became an important factor to manage, as the track was not always wet enough to allow them to work in the ideal conditions for their longevity. Finally, there were numerous penalties for incorrectly positioned front fairings as a result of frequent contact on the slippery track.

With five Qualifying Heats still to be run on Sunday morning before the list of finalists is revealed, the ranking had evolved well on Saturday evening since Friday’s Qualifying Practice.

Belgian driver Ean Eyckmans (Kosmic/Vortex) used his talent and knowledge of the terrain to take three victories and a second place which ensured him a more than favourable position for the rest of the Competition against Freddie Slater (Kosmic/Vortex), who took two good victories and as many second places. The poleman Akshay Bohra (KR/IAME) is far from deficient after relying on excellent consistency in the top three, accompanied by a victory that allowed him to beat Luka Sammalisto (KR/IAME) and Coskun Irfan (KR/IAME).

Matheus Ferreira (KR/IAME) made remarkable progress from his 18th position against the clock when he got the better of Dion Gowda (Kosmic/Vortex). Andres Cardenas (KR/IAME), Alex Powell (KR/IAME and Enzo Deligny (Parolin/TM) were less consistent and will need to do well in their final run on Sunday morning to get back to a position more in line with their performance in Qualifying Practice.

Britain’s Arvid Lindblad (KR/IAME) had a perfect run despite the weather chaos of the day. To win three times in a row as he did is undoubtedly the mark of a great talent. Juho Valtanen (Tony Kart/Vortex) proved to be a formidable fighter on the slippery terrain as he came back from 11th in Qualifying Practice, while Rafael Camara (KR/IAME) remained in the shortlist of favourites. Ariel Elkin (KR/IAME) put in a very solid performance in the top three of his heats in the wake of the fastest.

Beau Heijmans (Parolin/IAME), who was only entered for this race, was able to take on some of the best drivers in the world and was able to climb from his 28th time to the top group. Edoardo Ludovico Villa (Exprit/Vortex) put in one of the best performances of the day, climbing from 49th position to the top 10. Poleman Ugo Ugochukwu (KR/IAME) was not as successful as expected due to retirement, while Joe Turney (Tony Kart/Vortex) was not able to make up the ground lost during the Qualifying session. Andrea Kimi Antonelli (KR/IAME) never gave up despite two less favourable heats.

A live page will be at your disposal from Friday to Sunday with live timing and live streaming (available on Saturday and Sunday). Reports and results will be published every day on this website.