Douwe Dedecker took his first big victory in the 60 Mini category after a dominant performance at South Garda (Lonato), where the Third Round of the WSK Euro Series unfolded last weekend. This result now makes him a title candidate before the season’s Final in Adria! 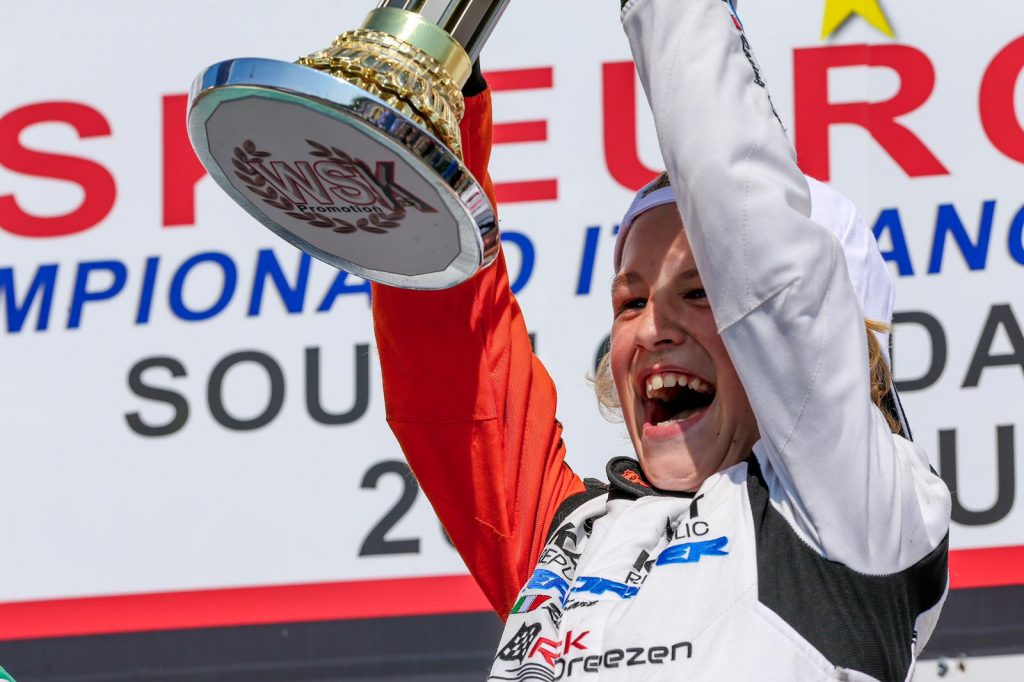 Douwe Dedecker had on numerous occasions shown the extent of his strong pace since the start of the 2019 WSK season, but either bad luck or difficult conditions had prevented him from a result up to his talent and commitment. Last weekend, the young Belgian set things right by mastering the fast and twisty circuit of South Garda, where very hot weather conditions added to the challenge in the always hard-fought field of 60 Mini drivers.

The weekend kicked off on the right foot with the fastest lap time in his Qualifying series, a performance that made him start ahead of his group in the Qualifying Heats where he remained almost unbeaten with four wins and a second place.

Provisional leader of the category by Saturday night, he started his Prefinal from Pole position and led the race from lights out to chequered flag on Sunday morning, keeping his successful momentum going before the final race of the weekend.

The Final run turned into another demonstration from Douwe who took the best start and produced a flawless race during ten laps. Despite the pressure from his closest rivals behind, he kept his head down and crossed the finish line as the victor, claiming his first win in the WSK Series at the end of a weekend where high speed, well-prepared material, and perfect track conditions made for a dominant success!

“I had such a strong weekend,” he commented. “We’ve known the speed was there, but for one reason or the other, I hadn’t been able to get the result until now. Thanks to everyone for believing in me and keeping me motivated! I have now been able to clinch my first victory in WSK, hopefully of many more to come!”

Thanks to his first victory of the season, Douwe climbed the overall class standings up to third place, only 22 points away from the provisional leader. With the incremental point system applied in WSK events, which will award the winner with a maximum of 153 points (13 for the Qualifying Heats, 60 for the Prefinal and 80 for the Final), he now has a good chance at the final showdown of the 2019 WSK Euro Series that takes place by night on the Adria International Raceway.

Douwe is now heading to the final round with Team Driver Racing Kart at the wheel of his Kart Republic chassis with engines prepared by KVS and the support and coaching of Rick Dreezen (below) and mechanic Tom Stevens.