The tarmac of South Garda is still warm from last weekend that the WSK Euro Series is already heading towards its Grand Finale. The Adria Karting Raceway is gearing up to host the closing event of this year’s Competition promoted by WSK Promotion that will be run by night with more than 180 drivers entered from Thursday to Saturday! 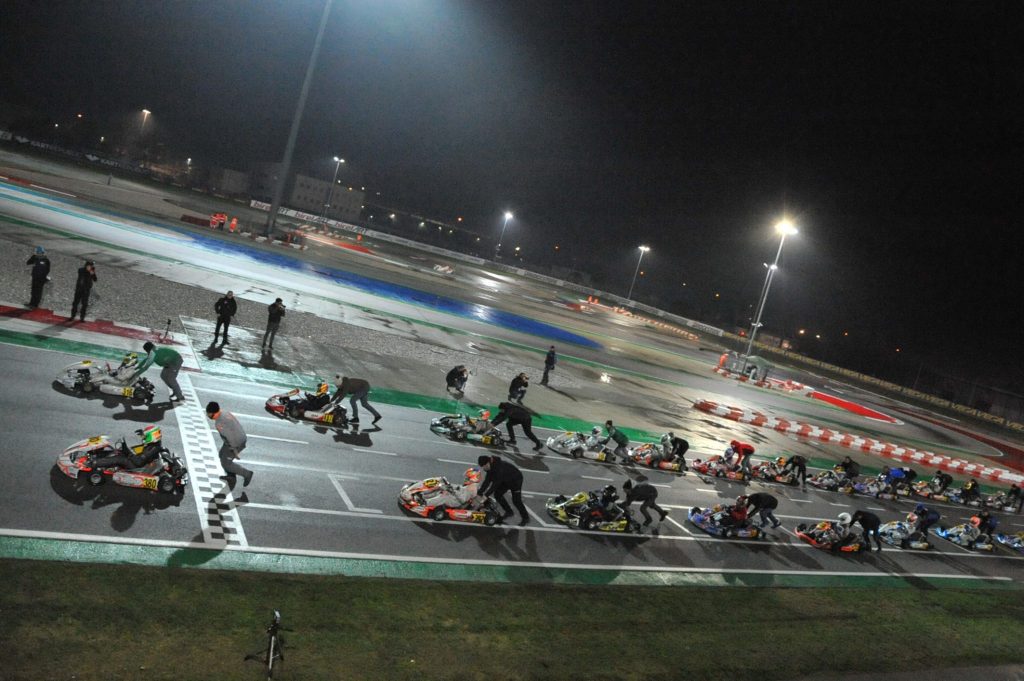 Just a handful of days after that Marco Ardigò (Tony Kart/Vortex) claimed both the KZ2 victory and title at South Garda Karting where the WSK Euro Series caravan had made its penultimate stopover, the final chequered flag of 2019 will wave this weekend at the fourth round of the season with three titles to be awarded in OK, OK-Junior and 60 Mini.

Every racing day in Adria will start late in the afternoon and will continue on in the night. This will bring important changes in terms of lighting and weather conditions, which are some further variables to be considered in a crucial moment of the season with drivers challenging each other to take the title in the three entitled categories.

60 Mini: Macintyre has the hupper hand

The Brit William Macintyre (Parolin/TM) got off to a bad start in Lonato and did not post a time in Qualifying of 60 Mini. The classification leader had a huge climb to face starting behind among the 92 verified drivers: he nevertheless completed his task brilliantly thanks to a great start that launched him to the fifth place at the chequered flag. This result keeps the Brit on top of the classification with 195 points. He is followed by the promise from United Arab Emirates Rashid Al Dhaheri (Parolin/TM), who reached 177 points thanks to the third place obtained at South Garda. The Belgian Douwe Dedecker (Parolin/TM) has been the rising star of the weekend as he won heats and Final and now stands third at 173 points, very close to the front-runners. The Jamaican Alex Powell (Energy/TM) slipped down from second to fourth at 135 points and leads the other Belgian in the top field, Ean Eyckmans (Parolin/TM) with 121 units.

OK-Junior: Antonelli affirms himself ahead

The victory in the OK Junior Final achieved in Lonato by the Brit Arvid Lindblad (Exprit/TM) and the great performance by the American Ugo Ugochuckwu (FA Kart/Vortex), who aimed at the full haul after winning Prefinal B, were not enough to place them in contention for the top. The third change on top in three races happened instead: after the victory in Prefinal A and the third place in the Final at the South Garda Karting circuit, the Italian Andrea Kimi Antonelli (KR/IAME) took the lead of the standings with 201 points. Antonelli overtook the Dutch drivers Robert De Haan (Energy/TM), who lost the lead and slipped down to fifth at 126 points, while Thomas Ten Brinke (FA Kart/Vortex) is still second at 179 points. The Russian Nikita Bedrin (Tony Kart/Vortex) won the opener in Sarno and is now third at 167 points. The Australian James Wharton (FA Kart/Vortex) follows him at 134 points after recovering two places thanks to the second place in the Final in Lonato.

OK: Travisanutto in the lead

The Italian Lorenzo Travisanutto (KR/IAME) was not as uncatchable in Lonato as he had been in Angerville, but he managed to retain the lead on Dino Beganovic (Tony Kart/Vortex) nevertheless thanks to the second place in the Final. The winner of Prefinal B Dino Beganovic (Tony Kart/Vortex) saw his gap nearly unchanged (from 215 to 196 points), but Dexter Patterson (KR/IAME) is getting ready for the final charge, strong of the fair and square win secured last weekend. The Scot dominated from heats to the Final in Lonato and is now third, very close to the leading duo at 190 points. The Dutch Dilano Van t’Hoff (Exprit/Vortex) lost a bit of ground and was pushed down to fourth at 120 points, while the Brit Harry Thompson (FA Kart/Vortex) reached fifth overall at 91 points thanks to the podium he claimed at South Garda.

As for every event in the WSK calendar, The RaceBox provides you with a special page featuring live timing & streaming (on Saturday) brought to you by WSK Promotion. Don’t miss also our daily reports to keep you up to date with the on-track results.