Nearly two months after their last round, in Ostricourt, the drivers of the IAME Series Benelux will gather this weekend to Francorchamps for the third Competition of the 2019 season. 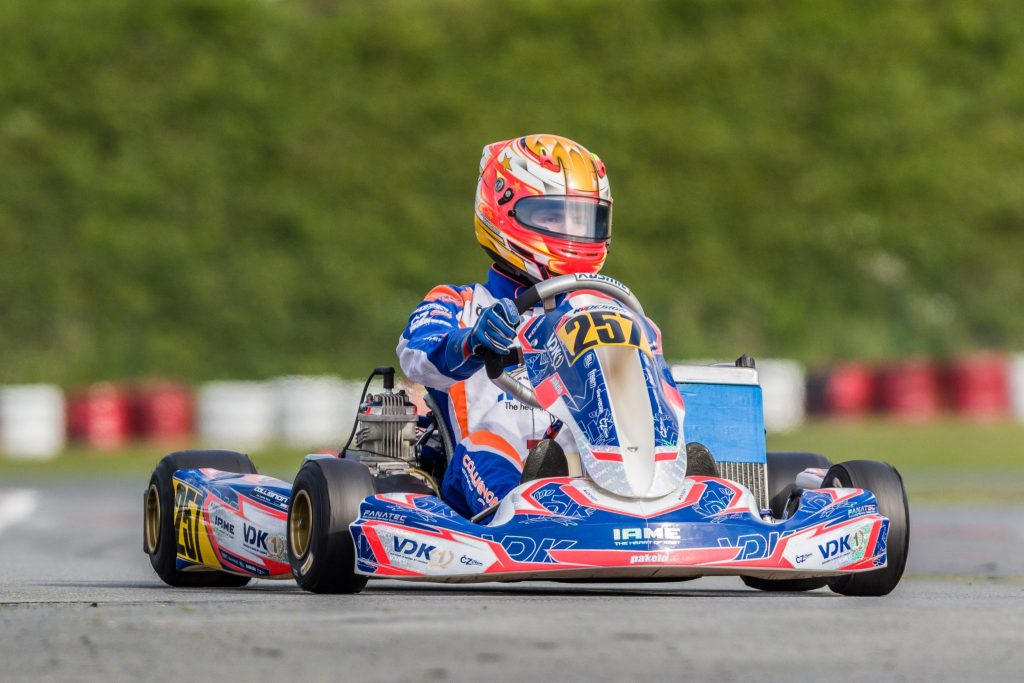 On a track located in the heart of the most beautiful circuit in the World, with completely renovated buildings, the entry list will feature up 150 names with only one goal in mind: the victory! For the title candidates, this Spa weekend is a unique opportunity to make an impression before the summer break.

True to its reputation, the IAME Series Benelux has offered two top-level rounds this season, with intense fights at all levels. Scheduled on the last weekend of June, the third of the five meetings of this 2019 campaign should also be animated and worth its weight in gold! More than 150 drivers are expected this weekend and Francorchamps could be a crucial step towards the title.

Unpredictable! This is how the fight in the category X30 Senior (14 years old and over), with more than 55 competitors, could be described. Regularity has so far rewarded Corentin Collignon, topping the championship standings… without never taking the maximum points! However, the Frenchman knows that he will sooner or later have to win against some strong rivals including Matteo Raspatelli, winner in Mariembourg, defending champion Joey Van Splunteren and the Muth brothers, O’Neill and Esteban. Beware also of Tuur Stalmans! Fifth in the standings after a complicated weekend in Ostricourt, the Belgian will not let his opponents slip away just like the Dutchman Niels Koolen … and Elie Goldstein! Winner of the Final in Ostricourt, the young man from Brussels aims to continue its momentum at Francorchamps. Let’s not forget to keep an eye on Martin Hebette and the rookie Enzo Lévêque, two drivers determined to make a place for themselves in the lead pack. The same goes for another newcomer in the category, the Antwerp native Sam Balota, who wants to forget his non-qualification at the Ostricourt Final.

In the X30 Junior class (12-14 years old), the Scotsman Cian Shields and the British Liam Mc Neilly have so far made the best out of the IAME Series Benelux. But the two young guys know that they won’t be able to rest on their laurels this weekend: a small mistake in this group of about 40 drivers can very costly championship-wise! And they should not underestimate the speed of Dutchman Bart Ploeg and Brit Zach Ripley, who have each won a Final this season. In front of them, we will also find the Belgians who intend to shine on home soil. Noah Maton and Victor Louis, 5th and 6th in the provisional ranking, but also Lucas Taelman, Yani Stevenheydens, and Alessandro Tudisca, are also to be feared after their good performances in Ostricourt. It should also be noted that the Dutch Dinand Dokkum, Dani Prins and Nathan Ottink all have the qualities to play an outsider role. It promises to be hot!

The Dutchman Milan Kok, who dominated the inaugural round of the IAME Series Benelux in Mariembourg, made a strong impression in the X30 Cadet category (10-13 years old) at the beginning of the season. But in Ostricourt, the opponents of the current championship leader managed to reverse the trend. Belgian Indoor Karting Champion Rayhan Mouôya scored the maximum number of points after the Qualifying Heats while former Mini Champion Kimmy Abraham won the Final in the Hauts-de-France. As a result, the three young wolves are now grouped into eight points in the provisional ranking. This promises a new fierce battle! Simon Lacroix, Wout De Ridder, and Romuald Demelenne know that they will have to react in Francorchamps if they do not want to be left behind by the top three!

In the Mini category (7-11 years old), the man of the first part of the season is Sacha van’t Pad Bosch! The Dutchman has so far shown almost perfect efficiency by winning the race in Mariembourg and finishing second in Ostricourt. To prevent him from further consolidating his lead in the championship, his opponents no longer have a choice and must absolutely win in Francorchamps. The Frenchman Clément Outran, winner of the last Final, Thomas Strauven, Maxence Verbrugge, Lukas Horcicka or Patrice Kowalewski have shown good speed so far. It is now up to them to turn this into a strong result. In this very compact and well-stocked field, a surprise is not to be ruled out and we could see guys like René Lammers, Thibaut Ramaeckers and Thibauld Geladé emerge.

X30 Master: towards a Kieltyka-Bauthier duel?

After the first two races of the IAME Series Benelux, Fabien Kieltyka and Hubert Bauthier seem to be the best equipped in this X30 Master category, reserved for over 25 years old or over 75 kilos drivers. With only five points between them in the provisional ranking, these two have a common objective: to be ahead of the other at all costs! However, we will have to keep an eye on Justin Bonnes. After an up-and-down start to the season, the defending champion is starting to gain momentum and the driver from Soignies could very well be playing more than just a referee role. Among the outsiders, Alain Bazard, the first of the Gentlemen (over 45 years old), but also Quentin Henry, Benjamin Berghmans Junior, and Bjorn Verhamme, among others, will be present.

Certainly very disappointed to have been trapped by rain during the Final in Mariembourg, the Estonian Sten Dorian Piirimagi took brilliant revenge in Ostricourt by winning hands down in the Qualifying Heats and then in the Final. Never satisfied, the defending champion of this X30 Super Shifter class (175cc with gearbox) aims to repeat this performance in the Ardennes to increase his lead in the championship. However, the Belgian Christof Huibers does not want to let him do that, just like his compatriot Sam Claes. The two drivers have the assets to win, but they will have to spit in each other’s hands to get rid of the fearsome Estonian. We will also closely follow the evolution of the other Estonian Kaspar Korjus, on the podium of the Final in Ostricourt, and the reaction of the competitors dissatisfied with their early campaign. We think in particular of Frédéric Op de Beeck, Roy Bakker and Rowan Grinwis.

Now that the stage is set, let’s wait until this weekend to experience a spectacular new round of the IAME Series Benelux in the new infrastructures of the Francorchamps Karting Club!

Translated from French by Guillaume Alvarez