The post-lockdown calendar includes successive races in the second half of the season. Just a week after the end of the WSK Super Master Series, the WSK Euro Series started at Sarno. Birel ART confirmed the performance of the chassis made in Lissone with the superb victory by Riccardo Longhi in KZ2, accompanied by the third place of Giuseppe Palomba, while British driver Oliver Gray won in OK with the Leclerc by Lennox Racing Team. 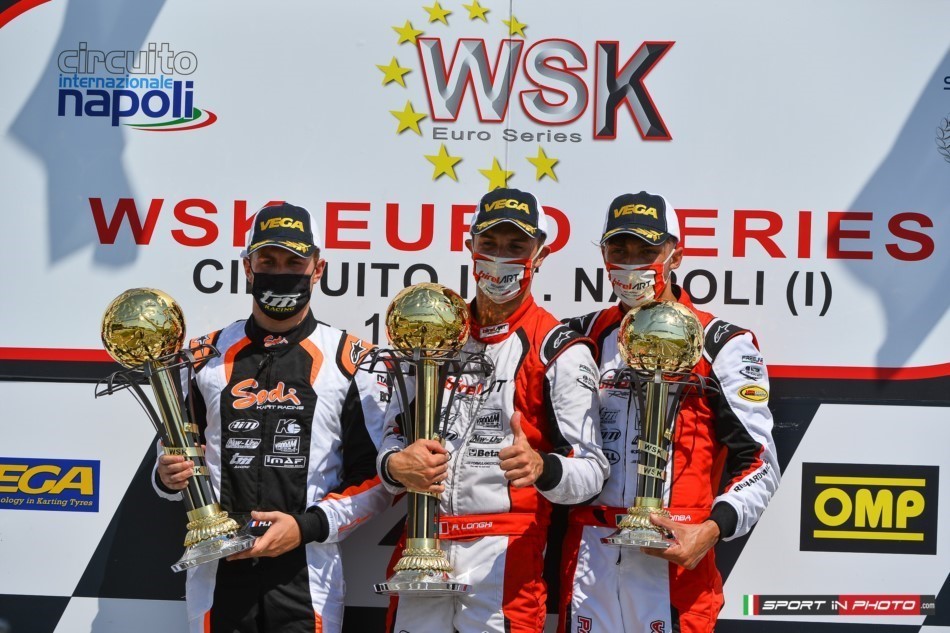 “This time we really got to the heart of the matter”, declared Ronni Sala, the President of Birel ART Group. “We quickly learned the technical lessons from the restart event at Adria to further increase the competitiveness of our karts. The competition in Sarno was very tough, because of the high temperatures, as well as the harshness of the battles on the track. Several incidents delayed some of our drivers and the results could have been even better.”

“However, everyone will have noticed our excellent level of performance in the international categories,” he adds. “In KZ2, Longhi finished in P1 and Palomba P3, Ravenscroft was very fast in OK, following in the footsteps of the winner Gray from the official Charles Leclerc by Lennox Racing Team. In the Junior class, Kucharczyk had all the attributes in hand before being forced to retire at the beginning of the Final.”

“Very sad news tarnished the satisfaction of this weekend in Sarno. Karting has just lost one of its major figures with the death of Claudio Flenghi, the soul of TM Racing. I have always had a deep respect for Claudio, whom I seem to have always known. The collaboration between TM and Birel is a long and beautiful story that will continue, but it will not be the same from now on…”

Riccardo Longhi and Giuseppe Palomba had a remarkable journey with the Birel ART Racing Team during this first WSK Euro Series event at Sarno. Constantly at the forefront since the beginning of the competition, they shone in the Top Three. Longhi finished unstoppably by winning the Prefinal and Final with the fastest lap in each race, while Palomba climbed on the third step of the podium in a competition where there was no shortage of opponents.

Alessandro Irlando was also fourth before finishing in sixth place due to a technical problem. Leonardo Marseglia made a very convincing performance that brought him to ninth place in the Championship. Finally, Valentino Fritsch found his marks for his return to racing.

Clayton Ravenscroft, who set the fifth-fastest time in the OK class, was third in his Prefinal. But his ambitions were dashed by an incident at the start of the Final, which resulted in a spoiler penalty, and his Final result was disappointing despite finishing seventh in the championship. He was joined at Sarno by three other drivers with interesting potential.

Finland’s Nikolas Pirttilahti reached 14th in the Final position after starting from 28th, while Belgium’s Kobe Pauwels climbed from 45th to 21st place after fighting fiercely. Maja Weug, entered in the colors of the Richard Mille Young Talent Academy, also took the wheel with a lot of spirit but had to retire during contact in the last lap of the Final race when she was 11th.

Tymoteusz Kucharczyk was once again one of the protagonists in the OK-Junior category on his Kubica Racing Kart chassis. Third in Timed Qualifying, fifth after the heats and fourth in his Prefinal, he, unfortunately, did not complete more than two laps in the Final after a racing incident. Cristian Bertuca and Keanu Al Azhari were able to defend their chances until the Final with various successes, while Andrea Frassinetti was unable to make up his Qualifying deficit.

The season is now off to a good start and the adventure continues for Birel ART. The first event of the new Champions of the Future series by RGMMC will be the next stop next week in Spain, at the Zuera circuit.