The Tony Kart Racing Team stepped on the podium in OK-Junior with Tuukka Taponen at the opening round of the WSK Euro Series in Sarno, where the Italian brand delivered a globally-excellent level of performance. 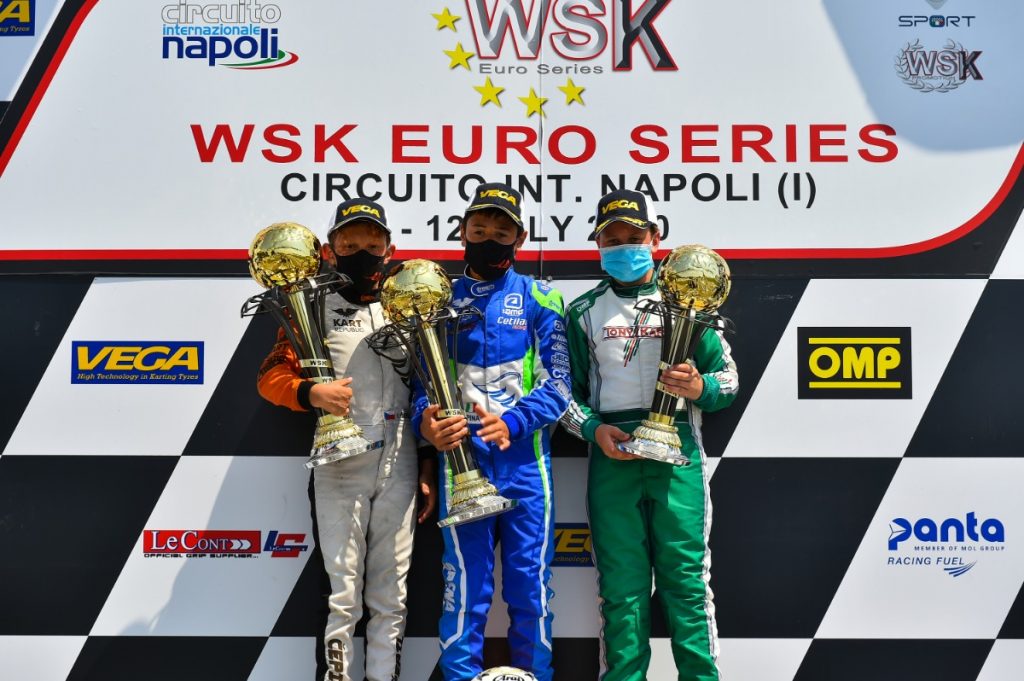 The Tony Kart Racing Team drew a positive balance back from the First Round of the WSK Euro Series. Despite the heat characterizing the weekend on the Circuito Internazionale Napoli, the results collected bring another podium beside a series of good performances. Just a few unlucky occasions prevented the Italian factory team from gathering other results fully reflecting their material’s competitiveness in all four categories.

The podium of Tuukka Taponen, third in the OK-Junior category, crowned a top weekend for the Finn. With his Tony Kart Racer 401 R powered by Vortex engines, Taponen was also able to cross the finish line four times in Prefinal and Qualifying Heats, proving that he now finds himself at ease with his racing package.

As for the other Tony Kart drivers in the same category, Aiden Neate and Karol Pasiewicz delivered an unsteady weekend, with the Pole able to recover 15 positions. In the decisive race, Maxim Rehm managed to overtake 11 opponents while Harley Keeble, unfortunately, ended up out of the game due to a penalty in Prefinal.

In KZ2, Simo Puhakka was again on top of his pace. Affected by starting on the dirty side of the track on Sunday, he finished the Final in fourth position. Over the weekend, the Finn took the lead in the ranking at the end of the heats after winning one race along with a second place. Bitter Final, however, for Alessio Piccini who was forced to retire while recovering in the field.

Joseph Turney proved to be once again one of the drivers to beat in OK. The Englishman was among the protagonists in the Qualifying Heats with one victory and two second places. His performances were equally good in Prefinal where he fought for top positions during all the race. In the end, though, an unintentional contact forced him to give up. Lorenzo Travisanutto, improving during the whole weekend until getting the Top Ten in Prefinal, could not play all his cards in the decisive race due to retirement.

Very positive weekend in Mini where James Egozi managed to bring his 2020 Rookie to pole position and obtained a victory in the heats. Jimmy Helias gained a third place in Prefinal after recovering several positions in the heats, as well as Jules Caranta, constantly in the Top Ten. Finally, after an unlucky Prefinal, Andres Cardenas improved his starting position in the Final where the best in the team was Kai Sorensen in tenth place.

With the next round of the Euro Series scheduled in September, the Tony Kart Racing Team is heading for Spain to compete in OK and OK-Junior in the first race of the Champions Of The Future series by RGMMC on the Circuito Internacional de Zuera.