A few months after Victor Bernier’s World Junior title in Sweden, VDK Racing added a new crown to its tally by winning the FIA Karting European Championship with Marcus Amand last weekend in Le Mans! A wave of success on which the Belgian team wants to keep surfing heading for the category’s World Event in Alahärmä! 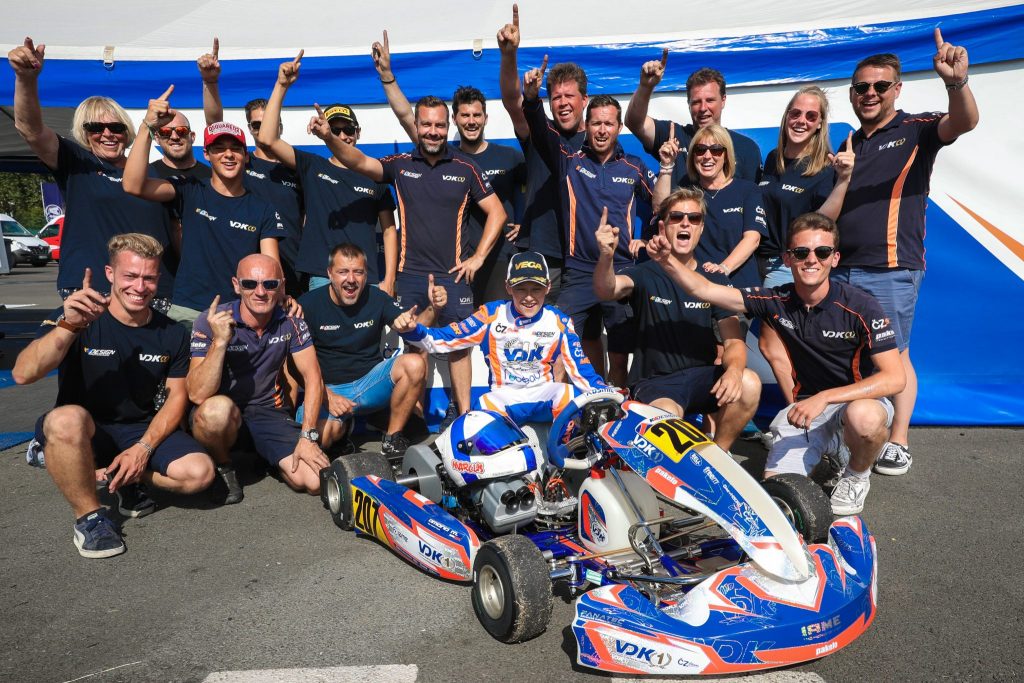 The best hopes of international karting gathered last weekend on the Circuit Alain Prost, in the heart of the famous Le Mans 24 Hour-complex, for the closing round of the FIA Karting European Championship – OK/Junior. Blue skies, sunshine, and a dry track – if not for a strong but brief rainfall on Saturday afternoon – set the stage for the conclusion of the 2019 European Competition where VDK Racing entered nine drivers, six in OK and three in Junior.

In the youngest of both classes, Marcus Amand kicked off his weekend on the right foot taking the third-fastest qualifying time out of 79 drivers, which made him start ahead of his group in the heats. On Saturday, he won his first race followed by two third places but was unlucky in his fourth round. On Sunday morning, Marcus played it safe in his last qualifying race and would start eighth on the Final grid ahead of his main championship rivals who had suffered various setbacks over the weekend.

At lights out, he took a good start and kept a high pace within the leading pack during the 19 round-Final that he concluded in eight position, eventually sixth after time penalties were given to two drivers ahead. With a seven-point gap over his nearest opponent in the final standings, Marcus could celebrate, at age 13, his first European Championship title in OK-Junior with VDK Racing, the Belgian team surfing on a strong wave of success just two weeks after Frank Chappard won the French OK Championship and only a couple of months since Victor Bernier conquered the World Junior title in Kristianstad, Sweden!

“It will take a few days for me to fully realize,” admits Marcus. “The weekend wasn’t easy, I had a lot of pressure on my shoulders and felt a little down on Saturday after an incident in my penultimate heat. In the last race before the Final, lots of drivers put new tires on, so it wasn’t easy but we managed to qualify. From then on, I just had to do the job. Since I have won something this season, I feel more confident and serene, we will try to do so well at the Worlds, fingers crossed!”

Regarding the other drivers competing in Junior, Santiago Trisini didn’t have the Qualifying he had expected for his second competition with the team. The Young American was set to start from the back of the grid from where he bravely fought his way through the field but wasn’t able to reach the Final, as well as Hugo Besson who pulled up some strong recoveries putting him twice close to the Top 10 in his heats!

In OK, Oliver Goethe took the eight-fastest time in Qualifying, making him start on the second row on the grid from which he reached third place on two occasions. If luck wasn’t always by his side over the weekend, the Monegasque still qualified for the Final where he finished 23rd.

Following a Qualifying session below his expectations, Loris Cabirou put his pace to good use in the heats where he overtook lots of rivals (34) to finish twice within the Top 10. Once in the Final, the native of Alès again showed the extent of his skills passing nine drivers up to 24th place, a rank ahead of Thomas Imbourg whose performance in the final race didn’t reflect a weekend where he kept battling with the best in each of his heats.

Despite knocking out several times at the Top 10 doors in his qualifying races, Sami Meguetounif missed the Final for nine points after bad luck struck in his last round. Tom Uzan was also left poorly rewarded after a string of comebacks in his heats, as well as Franck Chappard whose European Championship closing round didn’t live up to his hopes just a few days after claiming his second national title on the same circuit of Le Mans.

“We didn’t come here to win a race but the Championship, and that’s exactly what we did,” says Eric Verdaasdonk, Team Manager of VDK Racing. “Marcus drove well all weekend, without taking too many risks, while managing the stress of the event, the fact of competing on home soil and the many solicitations, so congratulations to him! From a pure results point of view, we could have hoped for more but this won’t matter much when we will rise up the Championship trophy! It was more complicated in OK but we will continue to work to make our pilot-chassis package progress for the Worlds.”

Next international stop for VDK Racing from September 6th to 8th in Finland where the Belgian team will be willing to defend its World Junior Championship title on the Powerpark Circuit of Alahärmä!