On the sporting side, the highlight of the 2019 French Handikart Championship was undeniably the intensity of the various clashes at all levels of the competition on the Le Mans circuit. Organized as part of the FIA Karting European Championship, the unique federal event attracted wide interest until the victory, for the second time in a row, of Maxime Léger. 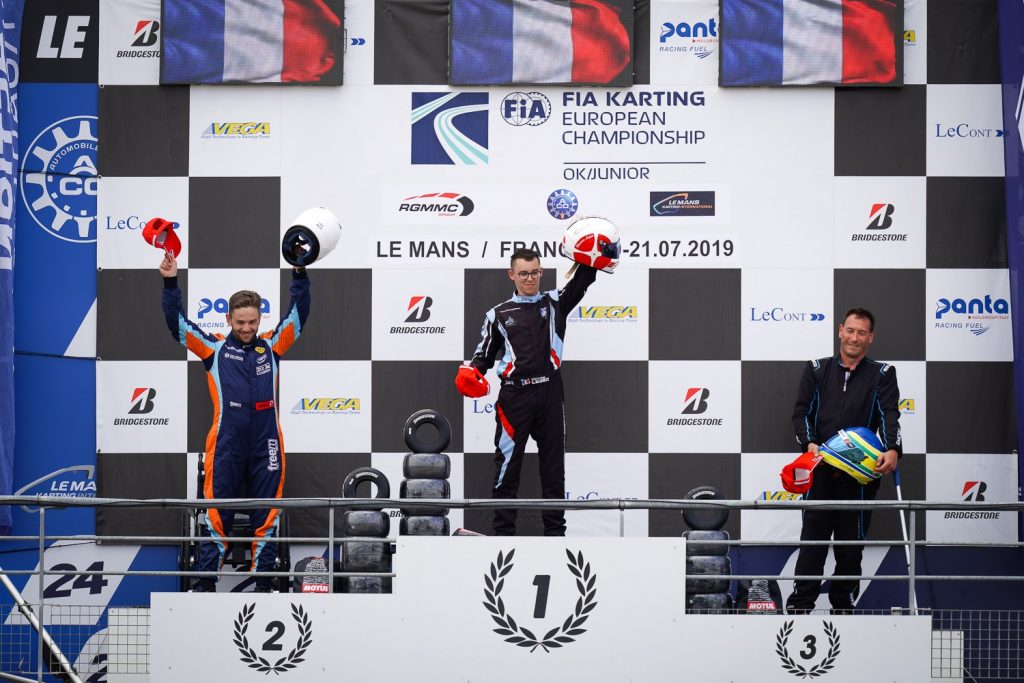 The FFSA is the only ASN to organize for eight years a competition reserved for drivers with disabilities. This year, the French Handikart Championship was again organized at the same time as a major international event, the last round of the FIA ​​Karting European Championship – OK/Junior, from July 19th to 21st on the Le Mans International Karting circuit.

17 drivers were entered the weekend in the two categories H2 and H4, depending on their degree of handicap, with the presence of two foreign drivers, the Algerian Omar Megari (Sodi/IAME) and the Hungarian Zoltàn Bessenyey (Mad Croc/Rotax), a former European Rally Champion in 2013 and 2014 in two-wheel drive.

The 2019 French Handikart Championship took place in Le Mans under mild and warm weather in the presence of Philippe Streiff, former Formula 1 driver paralyzed following a serious accident in training, then organizer of the famous Paris Bercy Kart Masters.

Friday night, Morgan Lavaux (Sodi/Rotax) surprisingly achieved the best lap time in Qualifying – 56”453 – ahead of the favorite Maxime Léger (Sodi/Rotax), while Alain Nicolle (CRG/Rotax) took third place at more than 60 years old. A brilliant achievement for a driver who’s been greatly involved in the development of the discipline on a national level. Vianney Chan Tsin (Kosmic/Rotax) was the fastest H4 driver with a lap time of 59.224 seconds.

Léger comes back in the heats

In the first qualifying round, Léger found his usual performance after refining the development of his material. He took three victories and the overall lead against Laurent Flamand (Exprit/Rotax) and Marc Borgetto (CRG/IAME) while Megari was fourth in front of the poleman Lavaux. In H4, Fabrice Dubois (Sodi/Rotax) returned to second place behind Chan Tsin while Nicolle was forced to retire following an injury.

Léger confirms in the final stages

Flamant was very incisive behind Léger during the Prefinal, finishing less than three tenths behind the winner. Further, the fight was raging between Megari, Christophe Giraud (Sodi/Rotax) and Borgetto crossing the finish line in just over three tenths with Lavaux further back.

The latter took the lead of the Final after an incredible start from sixth. But Léger quickly recovered the first place while Borgetto replaced Megari in third position. Léger escaped to victory while Lavaux and Borgetto faced off for second place until the latter spun in the middle of the race. Flamant then came back to challenge Lavaux’s second place. Maxime Léger won his second Handikart title by leading the Final with a lead of 6.5 seconds. Morgan Lavaux was finally second, five tenths of a second ahead of Laurent Flamant, Omar Megari and Christophe Giraud completing the Top Five.

Vianney Chan Tsin once again won the H4 category and the Philippe Streiff Award ahead of veteran Fabrice Dubois (below) and Zoltàn Bessenyey.