In the wake of his podium finish at the Swedish Grand Prix at Kristianstad, Luigi Coluccio again raised the colors of the Birel ART brand in the Final of the European OK Championship. 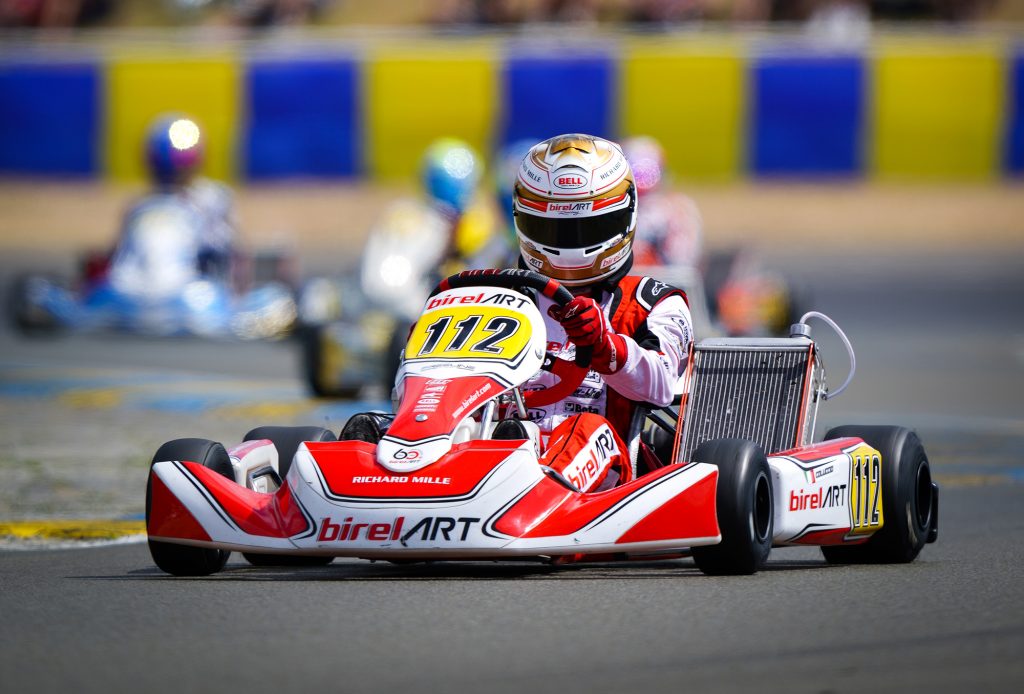 On the prestigious international circuit of Le Mans, the young Italian was in the fight to integrate once again the coveted top three, when a cruel accident put an end to his performance a few tens of meters from the finish. Coluccio and Birel ART will most definitely be planning to take revenge at the World Championship in September.

From Wednesday to Sunday at Le Mans, there was no shortage of hard work for the Birel ART team, who managed to put together an excellent technical package to face this particularly difficult event. Ranked 6th in Timed Practice out of a total of 67 drivers and less than one-tenth from pole position, Luigi Coluccio then made a brilliant run in the Qualifying Heats, finishing in the Top 5 five times at the wheel of his Birel ART-TM.

Coluccio in the heat of the battle

“I was on the outside at the start of the Final and my line was not very good, I was only ninth on the first lap. But I soon felt that my equipment could allow me to move up quickly,” said Luigi.

Back in third place, Luigi Coluccio was to hold this position for a long time, when a final duel with another driver ended in a clash. “At the time, I was terribly disappointed. A superb result was really close. In addition, it would have enabled me to enter the top five of the final classification of the European OK Championship.”

In OK, two other Birel ART drivers reached the final stage. Perfectly integrated with the team based in Lissone, the Thai driver Sutumno Thanapongpan won his place for the Final. Alas, a racing incident sent him to the back of the pack in the early laps. On the contrary, Alessandro Irlando went the other way. Not really satisfied with his Qualifying session, he used his talent and experience to join the group of finalists. He finished on a positive note by gaining ten places in 19th position.

“After the fatal episode at the KZ European Championship for Alessandro Irlando, we still have to deal with a flagrant lack of success. But this is one of the hazards of motorsport and we have to accept it,” regretted Luca Filini, team manager at Birel ART. “This time, it fell on Luigi Coluccio, who had been excellent at Le Mans. Fortunately, this does not call the qualities of our chassis into question and I would like to salute the work done by the whole team. The Canadian Thomas Nepveu and Spain’s Maya Weug in OK, as well as our Junior drivers, have constantly tried to improve their performance with the help of our technicians and engine builders. This was the case for the Luxembourgish Maxime Furon-Castelain who made his mark on his debut with our team, the Italian Lorenzo Ressico d’Aloisio, the Brazilian Julia Ayoub, the German Maksim Haralampiev and the Italian Cristian Bertuca. The latter made an excellent start to the meeting. Only two racing incidents kept Cristian out of the Final.”

Birel ART is already looking towards the World Championships in September. Victory will be the ultimate goal for the Italian brand…