The last race of the 2020 season saw the Leclerc By Lennox Racing Team chalk up another splendid success with Martinius Stenshorne making it to the top of the podium of the Final in the second round of the WSK Open Cup at Adria. 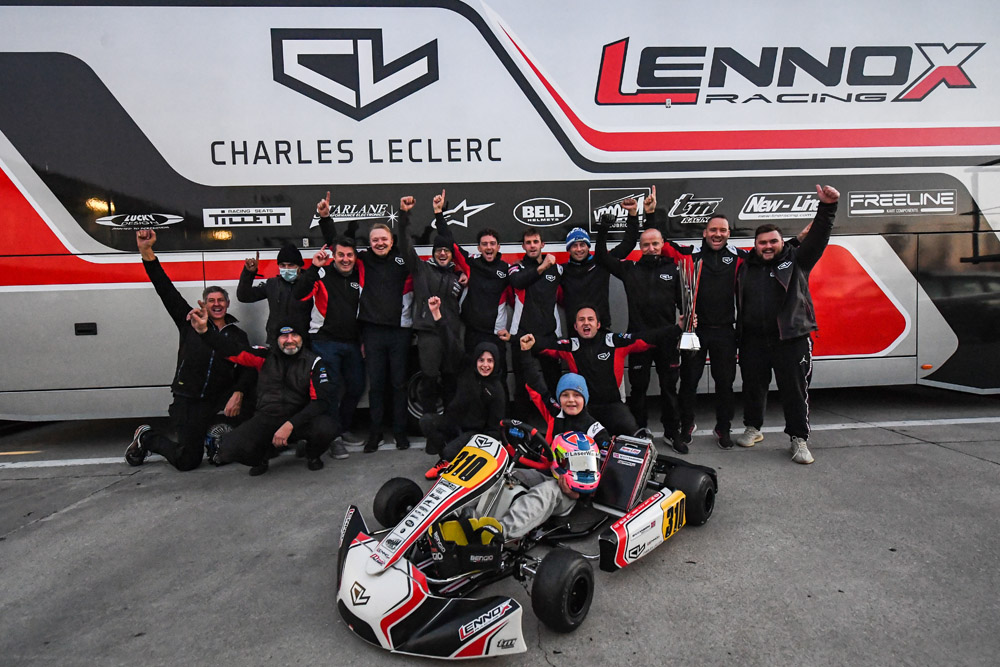 The victory crowned a week’s work at Adria Karting Raceway, in which the TM Racing-powered CL Karting by Birel ART package proved competitive in all classes, from MINI to KZ2.

In the first OK-Junior Final, Martinius Stenshorne already managed to complete a comeback, climbing seven places after a penalty nullified the promising fifth-place finish in the Prefinal. In the Qualifying Heats of the second round, Stenshorne managed two second places and a fastest lap, before hoisting himself up to second place in the Prefinal and crossing the finish line in first place in the decisive race, which he’d started in fourth. Enzo Deligny also qualified for both decisive races, managing to climb an impressive six places in the two Prefinals.

There were also great expectations for the drivers involved in KZ2, given Viktor Gustavsson’s excellent start, managing to qualify in pole position for the first round on Wednesday. Unfortunately, a racing accident as he was battling for the top positions in the first Final robbed him of a podium finish that was well within his grasp. Regrettably, the result of the second Final was also ruined by a penalty awarded because the front nose of the kart was out of position, thereby canceling out victory, second place, third place and the fastest lap posted in the Heats, as well as second place in the Prefinal. After posting the fourth-fastest time in Qualifying, Laurens Van Hoepen managed to climb up the standings in the first Final, finishing ahead of Gustavsson. However, bad luck also affected him in the second Final, in which he was forced to retire on lap 10.

The Open Cup also saw the debuts of Caleb Gafrarar and Gino Rocchio in the Mini International class. The two took to the track together with Dries Van Langendonck, who overcame his rivals in the first round to clinch Pole Position. Dries then continued his form in the Qualifying Heats by winning one and finishing second and third in the others, while Gafrarar managed to climb 30 places in the standings. In the second round, Grafrarar finished in the top ten in the Prefinal, while Van Langendonck posted the fastest lap in the decisive race after also finishing in the top ten in the Prefinal.

The Open Cup drew the Leclerc By Lennox Racing Team’s sporting season to a close. The next appointment is in 2021, with new goals and, hopefully, lots of new talent under our tent.