Emerging talents, mixed weather, close racing, last lap moves and worthy winners: the first International IAME Games provided all the ingredients of a great karting event for the conclusion of the 2020 IAME International season at Portimao! Connor Jupp drove to a sensational on-the-edge win in Senior, Aaron Walker emerged victorious in a rainy Junior Final while Leo Robinson took the Mini victory in a last-lap thriller on the Kartodromo Internacional do Algarve! 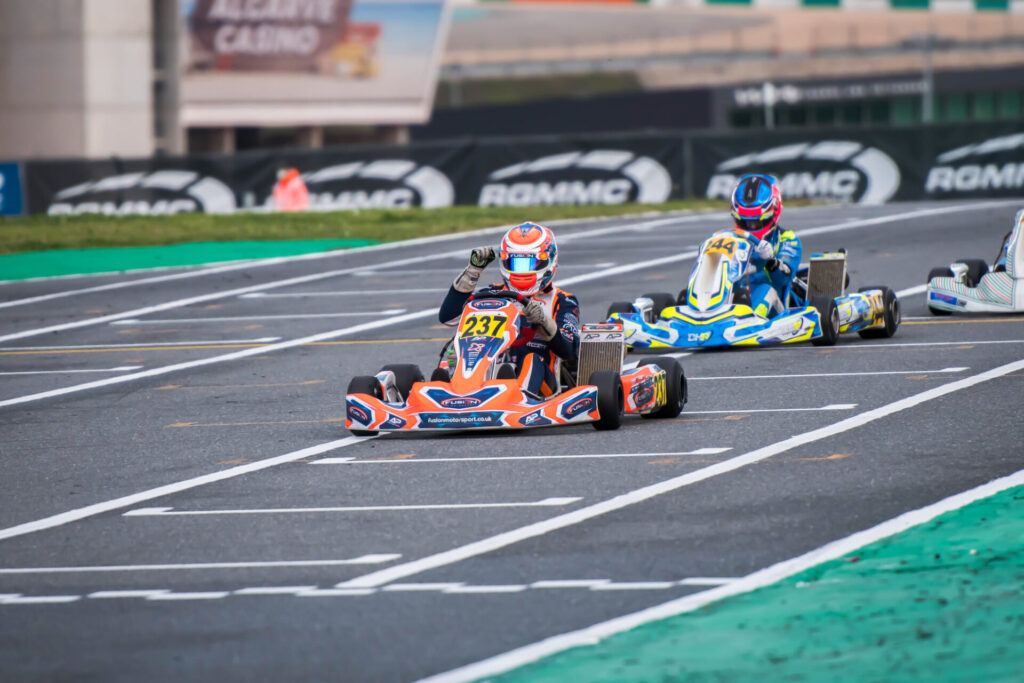 The International IAME Games did not miss its entrance on the global karting scene! By organizing this new format of “karting festival” on the last weekend of November, Promoter RGMMC successfully provided the best international IAME teams and drivers with a unique opportunity to conclude their 2020 international season on a high.

All the right boxes were ticked in Portugal, from the flawless organization of the event to the high-level competition on track where the slippery conditions made the competitors’ driving more difficult while bringing the best out of them in spectacular races! In Senior, the Brit Connor Jupp celebrated his return to karting on the highest step of the podium. The Junior victory went to the British driver Aaron Walker mastering the elements in a length-reduced Final, while his countryman Leo Robinson fought for the trophy until the closing meters of a breathtaking Mini showdown!

Cian Shields (KR-Sport) set the pace in Qualifying on top of the 63-driver Senior class, followed by Alejandro Lahoz (Kart Republic Spain) and Clayton Ravenscroft (KR-Sport). The Qualifying Heats, which started on Friday, led to a very tight battle for the points’ lead. Lewis Gilbert (Strawberry Racing) eventually emerged at the front with three wins, one point ahead of Oli Pylka (Dan Holland Racing), winner on two occasions. Ravenscroft, third overall, also took three wins, ahead of Mark Kimber (Strawberry Racing), with a pair of successes, and Connor Jupp (Fusion Motorsport). Sunday morning’s Prefinal, run on a drying tarmac, smiled upon Kimber. The Brit won in front of Jupp, Alessandro Ceronetti (Strawberry Racing) and Mathilda Olsson (Strawberry Racing), both achieving very strong recoveries from the back of the field.

Despite the track still being wet on some parts, slick tyres were the finalists’ favoured choice for the 19-lap long Final. Kimber kept the advantage from pole position at lights out, diving through the opening corners in front of Ceronetti. Jupp dropped to fifth place behind Louie Westover (Dan Holland Racing) and Morgan Porter (Kart Republic Spain). While Olsson, fourth on the grid, was forced to early retirement, Kimber was building a gap in the lead, followed by Porter and Jupp as Westover lost ground early on. At mid-race, Porter went briefly for the lead but a slight mistake cost him a few positions.Kimber took the first spot back before Jupp passed him, imitated a few laps later by a recovering Westover, the fourth different leader in a Final gaining in intensity! The race’s closing stages came down to a fascinating battle between Westover and Jupp. Second in the penultimate lap, the latter made a decisive move on his rival and victoriously crossed the chequered flag! Westover had to make do with second place ahead of Kimber, saving his podium in front of Gilbert and Porter.

The fastest in Qualifying, William Macintyre (KR-Sport) secured Friday’s first spot in the 51-driver Junior class, followed by Oliver Greenall (Fusion Motorsport) and Alessandro Giusti (Victory Lane Karting). The top positions were reversed the next day after the six Qualifying Heats. Greenall emerged as the man to beat with two wins, as many as Macintyre. Smith, having achieved one win, completed the top 3 ahead of Freddie Spindlow (KR-Sport) and Harry Burgoyne (Oliver Rowland Motorsport). Ivan Domingues (Fusion Motorsport) also won a heat but a retirement meant that he was classified 19th overall. Greenall kept his lead in Sunday’s Prefinal, making the best of difficult track conditions to grab the Final’s pole position in front of Macintyre and Spindlow.

While drying out, Portimao’s track surface was still slippery in some places for the 16-lap Final. Macintyre took the best start and surprised Greenall around the outside of the first corner. Yet, the polesitter was quick to fight back for the lead, soon joined by Spindlow and the Belgian Lorens Lecertua (LLK Belgium), while Macintyre dropped to seventh place after a mistake. On Lap 4, the race was turned upside down when the leaders Greenall, Aaron Walker (Strawberry Racing) and Spindlow, battling tooth and nail, left the door too open in one corner, allowing Smith to go first and pull away! The chase was on and a few laps later, Walker and Spindlow caught him in what turned into a three-driver tussle for glory.

The podium order was far from decided when the race was moved once again on its head on Lap 12 as the rain started pouring! The already slippery track became a great challenge for the drivers who had started the race on slick tyres, with Walker managing to make the most of it by taking the lead until the race was red-flagged by the officials. Due to the worsening grip conditions, the decision was made to fix positions on Lap 13 out of 16. Despite a warning flag, Walker was declared winner in front of Spindlow and Lecertua, with Smith classified fourth and Kanato Le (Fusion Motorsport) completing the top 5.

Sacha Van’t Pad Bosch (Fusion Motorsport) was the first to catch everyone’s attention in the Mini class. The young Dutchman took Friday’s overall pole position ahead of his teammates Leo Robinson and Cathal Clark. Ethan Jeff-Hall (Strawberry Racing), ninth fastest, was the revelation of the heats where he took a win, a second and third places. The British driver finished on top of Saturday’s rankings, followed by Nathan Tye (Oliver Rowland Motorsport), also winner of a heat. Van’t Pad Bosch ended up third overall, ahead of Robinson, who won two races, and Sebastian Minns (Fusion Motorsport), winner of one heat. Clark, eighth, also achieved a win. From pole, Jeff-Hall kept his momentum going in a rainy Prefinal, with Clark and Tye taking second and third places.

The Mini Final was the first race to take place on Sunday afternoon. The morning showers gave way to sunshine, which allowed the track to partially dry out. Despite some wet patches on the racing line, the 15-lap race produced numerous battles. Tye got away well at the start in front of Clark and Zachary Knight (Oliver Rowland Motorsport). A double battle in the lead quickly developed between Jeff-Hall and Tye, followed closely by Knight and Van’t Pad Bosch. The latter had the upper hand on the Brit and got involved in the tussle against Tye and Jeff-Hall, whose defensive driving also allowed Clark to close in, imitated by Robinson and Knight.

With no less than six candidates for victory and several lead changes in the closing stages, the tension was palpable until the race’s closing meters where Robinson had the last word by a narrow margin on Van’t Pad Bosch and Tye! Jeff-Hall had to settle down with fourth place in front of Knight, three positions ahead of Clark whose podium ambitions were ruined by an off-track excursion in the penultimate lap.

All official sessions on Saturday and Sunday of the International IAME Games were broadcasted via a live video stream, with commentary coverage, provided by RGMMC Productions’ video crew. All races, as well as interviews and highlights, were made available on the RGMMC Productions Youtube channel. More information and complete results can be found on the IAME Euro Series official website www.iameeuroseries.com, the RGMMC Group website www.rgmmc.com, and the IAME Euro Series Facebook page www.facebook.com/x30euro.

The International IAME Games of Portimao marked the conclusion of the international racing season for teams and drivers competing in X30 classes. The racing program for 2021 will start in Spain with the IAME Winter Cup, taking place on February 4-7 at the Kartodromo Internacional Lucas Guerrero of Valencia.